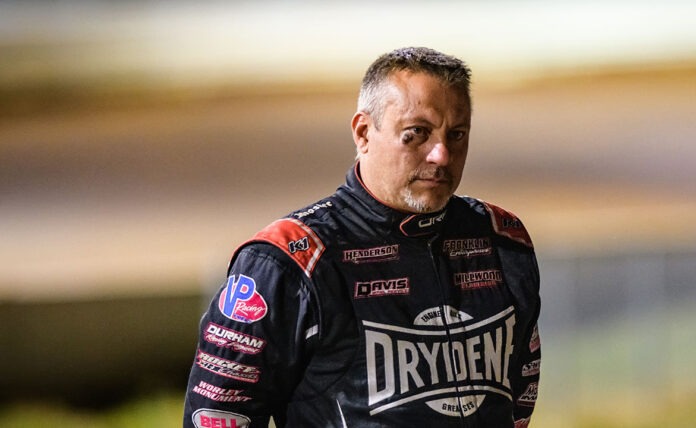 CONCORD, NC – When you look at the top of the World of Outlaws Morton Buildings Late Models standings, there’s no surprise. Three-time defending champion Brandon Sheppard is #1 – literally. Second place, however, might raise an eyebrow.

Not because of the driver. Because of his starts and proximity to Sheppard.

Chris Madden has risen to second in points – 26 points behind the reigning champion, even with missing two races – due to a consistent string of good finishes since joining the Series full-time in March.

The Gray Court, SC driver has four wins this season, more than any other driver. He also has more top-fives than anyone else (8) and is tied with Sheppard for the most top-10s (13).

Madden’s success comes after switching to a Rocket chassis. He’s been pleased with the team’s results, so far.

“I’m very proud of our team and very proud of the help and the feedback we’ve gotten through [Mark Richards, who owns Sheppard’s car],” Madden said.

Despite winning 32 Morton Buildings Features in his career, the veteran is still going through a learning curve this season.

“I’ve been to a lot of these [tracks], but I’ve never been to them in a [Rocket Chassis] before,” Madden said. “To get a basic starting point at some places has been very helpful, and there’s a small group of guys on this tour that’ve been very helpful.”

Even with all the help he’s getting from Richards and his competitors, one of the keys to his success has been his crew.

“Without having a great team, and a great group of guys I bring with me, we couldn’t do it,” Madden said. “A lot of the thanks and appreciation needs to go to my guys as much as to me. Ricky and Steven do a heck of a job, and they’re great employees and great workers.”

Madden’s success in 2021 started before joining the World of Outlaws full-time. Over the winter, he won his second consecutive Drydene Xtreme DIRTcar Series championship.

But “Smokey” knows running with the World of Outlaws is a whole different animal.

“Daytime racing in the South is totally different than what we’re doing out here,” Madden said. “But obviously seat time is important. I don’t care when it is or where it is, so seat time in the car definitely helped.”

Madden may be second in points, but his goal is to stay consistent through the end of the year. He knows if he stays on the path, more wins will come.

“You’ll get wins if you’re consistent and competitive,” Madden said. “Right now, I feel like we have been, and we’ve got a few wins and have been consistent. My goal is to just stay consistent with it and keep doing what we’re doing.”

“If I can keep myself happy and my guys happy, it’ll all work out in the end.”

Madden will try to keep his momentum rolling when The Most Powerful Late Models on the Planet make their sole Indiana swing of the year. The Series stops at Circle City Raceway Friday, June 4, and Plymouth Speedway Saturday, June 5.