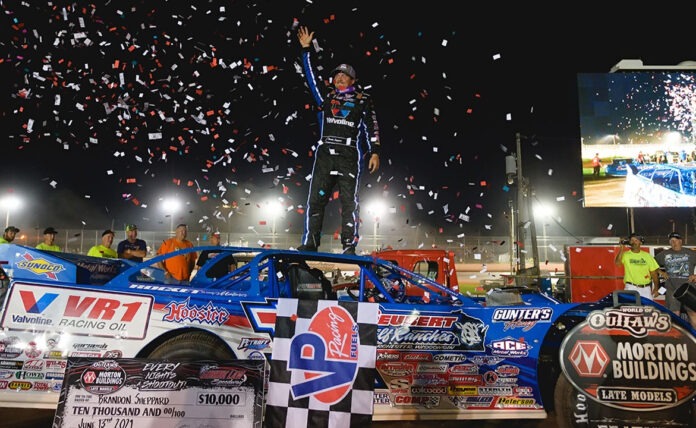 SUPERIOR, WI – Brandon Sheppard rose from his car in Victory Lane, waving to the crowd with confidence after winning Tuesday at Gondik Law Speedway. But the New Berlin, IL driver needed everything to go his way to collect $10,000.

A caution with two laps to go put Chris Madden on Sheppard’s heels, setting the stage for an epic duel. “Smokey” dove to the inside when the green flag dropped, pulling even with Sheppard down the back straightaway on the final lap. But Sheppard carried his momentum on the top of the racetrack, finding enough bite to beat Madden to the finish by 0.180 seconds.

It’s the “Rocket Shepp’s” 72nd career World of Outlaws triumph, one that needed some luck.

“[Madden] was in the good stuff on the backstretch so I let him stay with me there and I had to really charge into Turn 3 a lot harder than I wanted to,” Sheppard said. “I slid from the bottom and luckily there was a little bit up there on top in order for us to get ahold of to get back going again.

“Our car was really good, we were able to get the lead and control most of the race, but we didn’t need those last few cautions, that’s for sure.”


Sheppard extended his points lead for the third straight event— now 68 points ahead of Madden.

Even though Madden settled for second, he enjoyed racing Sheppard for the win. The Gray Court, SC driver stated how well his car hooked up to the track.

“We were pretty good in the middle and bottom, and [Sheppard] had found him a little strip I believe up top off the corner and he just got a big run,” Madden said. “It was an awesome race, a fun race, and we had a really good car. If we would’ve been out front, we would’ve won.”

Sheppard wrestled the lead away from Dennis Erb Jr. on Lap 24, using that same outside lane that led him to victory. Erb crossed the line third—his fifth top five in the last nine races.

The Carpentersville, IL driver is thrilled with the finish but knew what kept him from reaching Victory Lane for the second straight race.

“[Tuesday] we were running really good, the car fired off real good but we just needed to be a little bit tighter late in the race,” Erb said. “All in all, we had a good night and kept it upfront all night. We’re happy with that and we’ll go on to the next one.”

Tyler Bruening, the top Rookie of The Race finished fourth. He extended his lead in the chase for Rookie of the Year to 120 points over Ryan Gustin, who finished sixth.

James Giossi, from New Richmond, WI rounded out the top-five.

Sometimes it takes a little luck to find your way to Victory Lane, but it’s something Brandon Sheppard won’t complain about. He’s inching closer to World of Outlaws history—six wins away from tying Josh Richards for most wins all-time (78).

UP NEXT: The Most Powerful Late Models on The Planet travel west to River Cities Speedway in Grand Forks, ND on Friday, July 16. 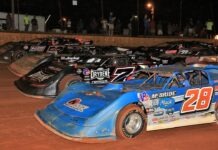