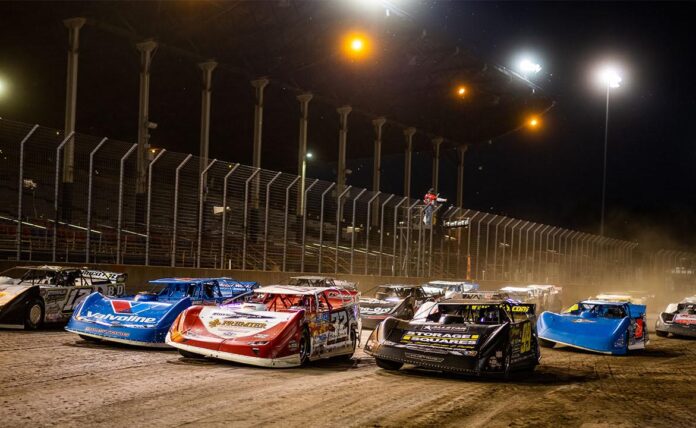 The Series will make its seventh, eighth and ninth visit to the Davenport, IA track, on August 26-28 for the Quad Cities 150 presented by Hoker Trucking.

Thursday (Aug. 26) and Friday’s (Aug. 27) events will be full shows, including 40-lap, $10,000-to-win Morton Buildings Features each night. An “Every Lap Matters” format will be used for the weekend, meaning drivers will score points based on Qualifying, Heat Races, and Features.

Winning all three events could see one driver walk away with $50,000 in total.

The Quad Cities 150 is also a homecoming for Tyler Bruening and Ryan Gustin. The two Hawkeye state drivers are locked in the Battle for Rookie of the Year, as Gustin tries to cut down Bruening’s 102-point lead. Both drivers have the chance to bring home state fans to their feet, as a win by either would be their first taste of World of Outlaws glory.

Last season, three-time and defending champion Brandon Sheppard swept all three events at the Iowa venue. That includes the thrilling battle between he and Ricky Thornton Jr. that ended in an epic photo finish.


A fourth straight win at Davenport would add another rung on Sheppard’s ladder toward World of Outlaws history. The New Berlin, IL driver is one win away from tying Darrell Lanigan for second on the all-time wins list (74) and five away from matching Josh Richards (78) at the top.

The tripleheader is also another stop on Sheppard’s journey to tie Richards for most Series championships. “The Rocket Shepp” currently holds an 88-point lead over rival Chris Madden.

Madden is one of the drivers trying to knock Sheppard off his throne this season. The Gray Court, SC driver is tied with Sheppard for the most wins in 2021 (4) and top-10s (25).

The racing action doesn’t stop at the track during the Quad Cities 150. Fans can also enjoy events throughout the weekend, including a post-race concert each night.

They’ll also be able to meet their favorite drivers during an autograph session on Saturday, Aug. 28.

Fans who are looking for hotel accommodations throughout the weekend can take advantage of a special rate at the Isle Hotel and Casino in Bettendorf, IA, as well.

Joining the World of Outlaws throughout the weekend are the IMCA Sport Mods and IMCA Modifieds.