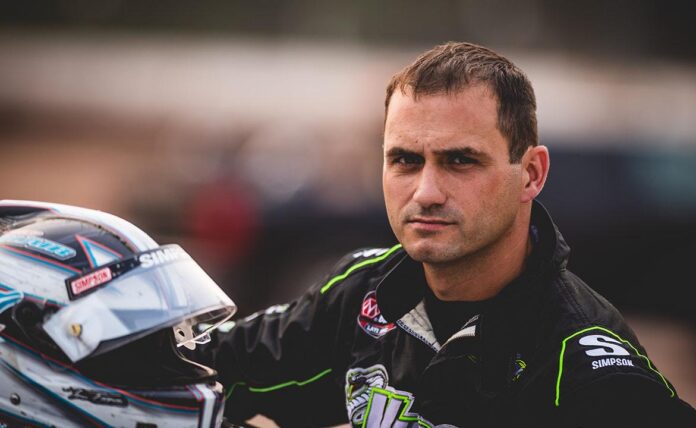 For Pennsylvania’s Max Blair, those items equate to experience he’s gaining for a full-time World of Outlaws run in 2022 – and for a run against the Outlaws in his home state, Aug. 19-22.

In April, Blair teamed up with car-owner Shawn Martin and Viper Motorsports. Since then, the Centerville, PA driver has racked up multiple victories—most of them coming throughout New York and Pennsylvania.

Despite that success, Blair struggled before his team started moving in the right direction.

“It took us about a month or so to get everything to start clicking, but the last month and a half or so has been real good around home,” Blair said. “We’ve had some decent runs at these bigger races too; we’re learning a little bit every night we race this type of stuff.”

Those bigger races include the USA Nationals at Cedar Lake Speedway. Blair finished sixth in the $50,000-to-win finale—a strong showing against some of the best Late Model drivers in the country during his first trip to the Wisconsin track.

Blair’s decision to make the trek to the Badger State was a teaching moment, to gain more knowledge for next season. The Centerville, PA driver hopes the experience puts him on a path toward earning World of Outlaws Rookie of the Year honors next year.

“We’re going to run that ULMS deal around the house, but anytime we can go to any racetrack that has a race we have to be at next year, we’re going to try and hit them all just to try and build a notebook,” Blair said. ”I’m going to see a lot of race tracks I’ve never seen before and a lot of stuff that I’ve never really dealt with before. So, the more we can do this year, the faster it’s going to speed up that learning curve next year.”

Blair is no stranger to Victory Lane with the World of Outlaws, leading The Most Powerful Late Models on the Planet to the checkered flag three times in his career. The Series returns to his backyard for a four-race swing Aug. 19-22, including a stop at Eriez Speedway, where he’s won three times this year.

Blair has some confidence heading into the Northeast swing but knows racing is a sport with many ups and downs.

“We’ve been running pretty good at all of the big races at Eriez this year,” Blair said. “I’ve got a lot of laps around that place, so who knows. Hopefully, I like to think we have a chance at it.”

“You just never know about the other ones either. It’s one thing about this racing deal nowadays. Somebody could be really good today, and you’re going to run 15th tomorrow, and then it can go the other way around too.”

Blair leads a contingent of regional competitors who hope to keep drivers like three-time and defending champion Brandon Sheppard and four-time winner Chris Madden out of Victory Lane.

It’s already happened once this season, when Dave Hess won his second career Morton Buildings Feature at Stateline Speedway in June. Blair finished third in that race, showing how tough it is for the tour regulars to win.

“I’ve said it for years; we’ve got a group of really good guys up our way, especially at our racetracks,” Blair said. “If you look back over the years, it reflects that. Anytime you come to our area, there’s been a bunch of winners from our area, and even if they don’t win the race, there’s always local guys running in the top three or five at every single show.

“That just shows how good the competition is there week-in and week-out.”

Between racing against the tough competition in the Northeast and battling the World of Outlaws, Blair learns more with every corner. It’s valuable experience he’s collecting—items he’ll use to make a run toward a Series championship.