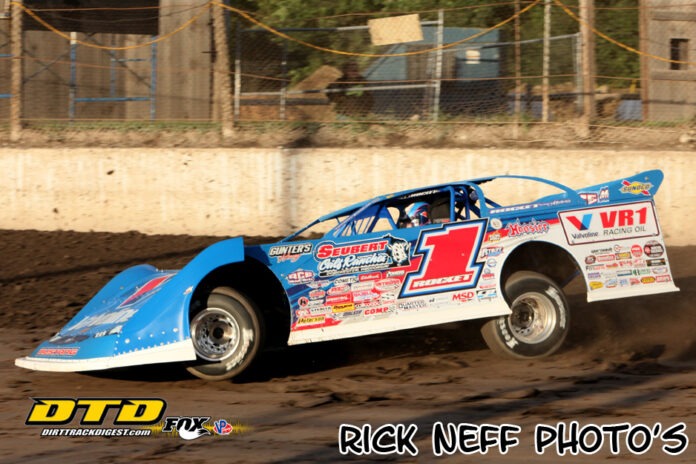 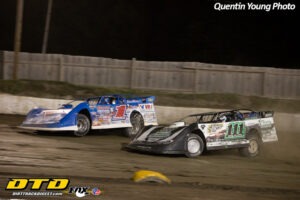 The New Berlin, IL driver and Centerville, PA’s Max Blair waged an epic battle in the closing laps, resulting in the two exiting Turn 4 for the final time side-by-side. Blair had thrown his Viper Motorsports car underneath Sheppard in the final corner to pull even with him, but the blue Rocket1 Racing machine had the better momentum up top, propelling him ahead of Blair at the finish line by inches.

The victory was Sheppard’s fifth of the season and 74th Series win of his career – tying him with Darrell Lanigan for second on the all-time wins list.

It’s also a victory that wouldn’t have happened if the race went any longer.

“The last couple of laps, I started laying over more, and I kept getting looser and looser, and I didn’t know why,” Sheppard said. “I took the checkered flag and getting into [Turn 1], my right rear tire went down.

“We got lucky there for sure; if it had been 41 laps or another caution, we wouldn’t have won that race.”

Another factor in the race was Sheppard’s tire choice. He picked a different compound than some of his challengers, putting him at a disadvantage on shorter runs.

“I felt like I was better on the longer runs, which I should’ve been because I was on a little bit harder of a tire than what [Blair] was,” Sheppard said. “He was softer than me, and I couldn’t run on the bottom of the track like I wanted to.”

Sheppard is now only four wins away from matching Josh Richards at the top of the win list (78).

He also extended his points lead to 128 over Chris Madden, who finished 13th. The Gray Court, SC driver was running third when he lost oil pressure, sidelining him for the last two laps.

Even though Blair settled for second, he still wore a smile. He stated he was happy to run up front with some of the top drivers on tour.

“I think I had a really good racecar, but Brandon Sheppard’s a really, really good racecar driver,” Blair said. “On that last lap, I thought I had him getting into [Turn 3], and he just carried so much momentum off [Turn 4] that I just couldn’t quite beat him back to the line.

“You don’t get too many opportunities to run against [Chris Madden] and [Brandon Sheppard] like that, so I’ll take that all day long; that was fun.”

After switching to a backup car before the Feature, Tyler Bruening, the top rookie, finished third.

The Decorah, IA driver had motor trouble at the end of his Drydene Heat Race, forcing him to battle from the back of the field to reach the podium.

“The car was dynamite tonight,” Bruening said. “I like these big racetracks; it just suits my driving style a little more, and they’re a lot of fun for me.”

“You got to have a good race car to come from dead last to run third with these guys.”

NASCAR Truck and Super DIRTcar Series regular Stewart Friesen crossed the line fourth in his second appearance with the World of Outlaws Late Models. The Niagara-on-the-Lake, ON driver thought he may have used up his stuff trying to get to the front.

“I think I just burned the tires up trying to get there, and then toward the end, I was just kind of skating,” Friesen said. “A good run for us. We’re still learning these cars. There’s just so much to them. I still don’t think it’s where it needs to be, but it’s pretty cool to run with these guys and be out here.”

Pennsylvania’s Dan Stone finished fifth, his second top-five with the Series in 2021.

A little luck doesn’t hurt when you’re trying to reach Victory Lane, even if you’ve been there as often as Brandon Sheppard. Thursday’s win isn’t something the “Rocket Shepp” is taking for granted.

“The good Lord was watching after us [Thursday],” Sheppard said.

UP NEXT: The Most Powerful Late Models on the Planet head to Pennsylvania for a stop at the iconic Williams Grove Speedway on Friday, Aug. 20.