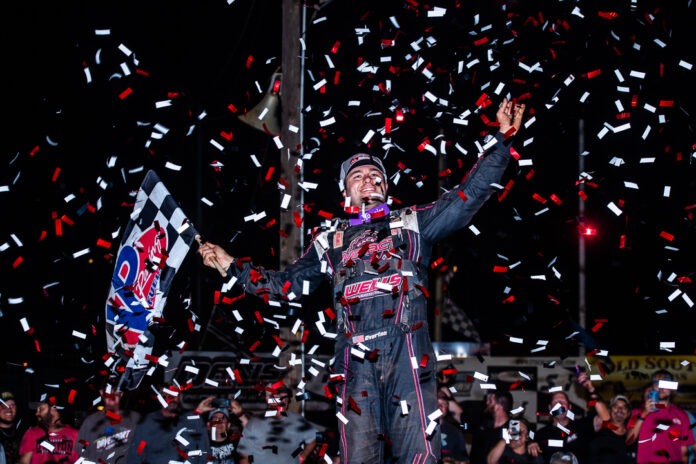 GAFFNEY, SC – Brandon Overton had one thing on his mind as the laps dwindled Thursday night at Cherokee Speedway. He replayed an old race at the South Carolina venue. One he lost on the final corner because he mismanaged his tires.

This time, he wouldn’t let it happen again. The Evans, GA driver, played the tire game perfectly, holding on to win the inaugural Rock Gault Memorial—worth $40,000.

While “Big Sexy” saved his tires enough for the end of the race, worry still sank in the last few laps. Especially when he saw Jonathan Davenport and Chris Ferguson, who were in the top-five, go to the pits.

“I was behind [Jonathan Davenport] the whole time, and I was like he really wasn’t that sideways,” Overton said. “That worried me, so I just slowed down as much as I could and was just trying to baby it to the end.

“I lost a race over here for 10 grand coming to the checkered, so that was playing back through my mind, and I was like, slow down and don’t blow the tire off.”

Before Davenport’s tire blew, the start of the race saw Kyle Larson take the early lead with “Superman” in his tire tracks and Overton lurking behind them. When Larson eventually slipped off the bottom in Turn 1, Davenport darted under the #6 car to steal the lead and brought Overton with him.

Then, Davenport and Overton waged an epic war for the lead. Overton took several peeks to the outside of Davenport for the top spot before making his move on a Lap 48 restart.

“Big Sexy” rolled to the outside of Davenport in Turn 3, using his momentum to pull even. He flexed his muscles even more in Turn 4, propelling his Longhorn Chassis past Davenport and into the race lead.

“It was latched good on that restart, and I said man, I ain’t got nothing to lose,” Overton said. “I just blasted her in there, and I got me a good run, and as soon as I cleared him, I got back down.”

The win is Overton’s fourth World of Outlaws triumph of the season and the 17th Series win of his career. The $40,000 check adds to Overton’s list of high-paying wins in 2021, including more than $300,000 between the Dirt Late Model Dreams and Firecracker 100.

Davenport, whose chance at a podium finish ended with tire problems, finished 19th. The tire wear in the Feature surprised the Blairsville, GA driver, throwing him a curveball.

“I never really thought tire wear would be an issue after the Heat Race, so we probably cut ours up too much,” Davenport said. “I was just not really balanced enough to drive off the right front like I needed to because I tightened my car up a little bit, thinking we didn’t need to worry about tire wear issues.”

“We had to use a little bit of tire to get there, and we just didn’t have enough tire there at the end to put on a charge,” Madden said.

Jimmy Owens crossed the line third after starting ninth. The Newport, TN driver bided his time working through the field, knowing he’d have to save his equipment for the end.

“We just took our time early in the race because we knew we had to have a lot of tire left at the end there,” Owens said. “We had a pretty decent car; we made a whole lot of adjustments, and it was a whole lot better there for the Feature than it was in the Heat Race.”

Brandon Overton’s experience at Cherokee and what to do when his tires were going away paid off, leading to the $40,000 Victory. It’s that experience that helps him add to accolades in 2021, especially when there’s big money on the line.

UP NEXT: The Most Powerful Late Models on the Planet head to Lavonia Speedway, in Lavonia, GA for its only trip to the Peach State this season.