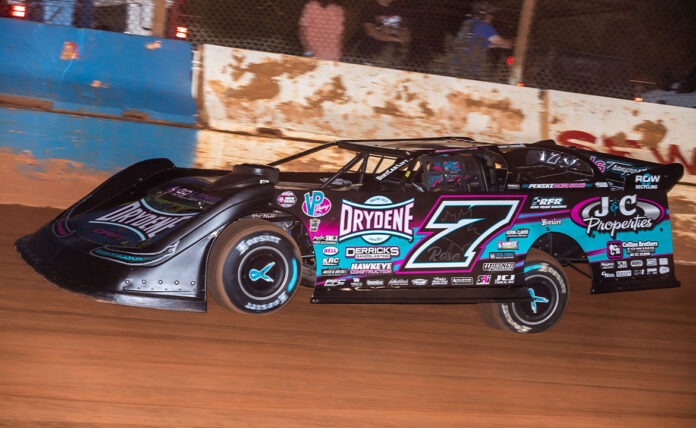 CONCORD, NC – “There are 86,400 seconds in a day. It’s up to you to decide what you do with them.” That’s a quote from former North Carolina State Men’s Basketball Coach Jim Valvano during his infamous speech at the 1993 ESPY awards.

Valvano, who died of cancer, started the V Foundation for Cancer Research in 1993, and now World of Outlaws Morton Buildings Late Models driver Ricky Weiss is doing his part to support the foundation.

For the second consecutive season, Weiss is teaming up with the V Foundation to try and raise money to help find a cure for cancer. The Headingly, MB driver’s family has a history of ovarian and breast cancer, which motivated him to join the fight.

“It just brings our spirits up and my grandma and everyone back at home when we can do something like this,” Weiss said. “There’s a lot of people that come through the pit area that thank us for doing what we do, and it’s pretty cool to know that we can give back to people that’s been through such hard times.”

Weiss debuted a new paint scheme at Cherokee Speedway for the Mike Duvall Memorial. He traded his usual black and red colors for black with teal and pink—the two colors representing Breast and Ovarian cancer. October and November are the two awareness months for those forms of the disease.

“We’re trying to raise money for the V Foundation, which focuses on those two cancers and raises a lot of money,” Weiss said. “Hopefully, we can raise a little bit to where we can help them and give them something that maybe they wouldn’t be able to if they didn’t raise that money.”

Weiss is raising money through the help of fans by selling bracelets and stickers. Fans can write their name on the stickers and put them on the deck of his race car. All that money is going directly to the V Foundation.

Once the season is over, fans will have other ways to donate.

Weiss uses his 86,400 seconds each day to give back to a cause that’s important to him and his family. Sometimes, the checkered flag isn’t the only thing drivers race for.

“We’re obviously open to donations and anything someone can help with,” Weiss said. “I think it’ll go a long way and mean a lot to some special people.”

Fans can see Weiss’s new paint scheme on Nov. 4-6 when the World of Outlaws Morton Buildings Late Models return to action at The Dirt Track at Charlotte for the NGK NTK World Finals.