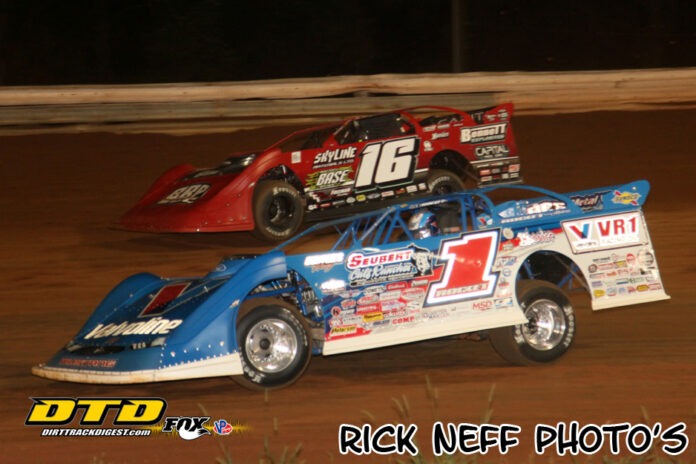 CONCORD, NC – All dirt roads lead to Charlotte this weekend for an epic conclusion to the 2021 season for the World of Outlaws Morton Buildings Late Models.

The Most Powerful Late Models on the Planet will contend for an elusive NGK NTK World Finals victory at The Dirt Track at Charlotte Nov. 4-6 and history will be made when Brandon Sheppard claims his fourth Series title – tying Josh Richards for the most in Series history.

The jam-packed action kicks off Thursday, Nov. 4, with two rounds of Slick Woody’s Qualifying—setting the Drydene Heat Race lineups for Friday and Saturday’s Feature events. The two 50-lap Features paying $12,000-to-win will finish out the weekend.

Here are some of the storylines to keep an eye on this weekend:

But the New Berlin, IL driver is still chasing Richards in another category. He has 77 career Series victories—one away from tying “The Rocket Man” for most all-time. If Sheppard can sweep the weekend at The Dirt Track at Charlotte, he’ll be the new king atop that mountain.

Charlotte Success: Another driver with success at The Dirt Track at Charlotte is Sheppard’s closest championship rival Chris Madden.

The last time the World Finals were held in 2019, Madden made a trip to Victory Lane. The Gray Court, SC driver, also has three victories at the Tar Heel state oval and is due for a trip to World of Outlaws Victory Lane. His last win with the Series was in May at Port Royal Speedway.

Despite the drought, Madden’s had a successful season, locking up second-place in the standings on the strength of 26 top-fives and 38 top-10s.

Battling for 4th: Most drivers have locked up their positions in the season-long standings, but Dennis Erb Jr. and Ricky Weiss are fighting for fourth.

While the two drivers fight for a victory this weekend, Erb may have an advantage after tasting Victory Lane at the World Finals in 2017.

A win by the Carpentersville, IL driver would be his fourth of the season—tying Chris Madden and Devin Moran for the third most in 2021.

If Weiss reaches Victory Lane this weekend, it’ll be his first win of the season, first in his Sniper Chassis, and the third World of Outlaws win of his career.

Briggs will finish seventh in the standings in 2021, entering The Dirt Track at Charlotte with three top-fives and 11 top-10s.

T-Mac Doubles Up: The NGK NTK World Finals will be a busy weekend for Tim McCreadie as another Late Model win in Charlotte isn’t the only thing he’s chasing.

On the Late Model side, McCreadie is the most recent Series winner at Charlotte’s Dirt Track—winning at the “Last Call” in 2020.

He enters the weekend with a national touring series championship under his belt and a World of Outlaws victory at Richmond Raceway.

Big Sexy in Charlotte: The Dirt Track at Charlotte is the biggest stage for the World of Outlaws Morton Buildings Late Models, and a big stage is where Brandon Overton thrives.

The Evans, GA driver is having a dream season—reaching Victory Lane 29 times, including five with the World of Outlaws.

“Big Sexy” scored a win at 2020’s “Last Call” and again found Victory Lane at the track in July.

Another victory would add to his epic list of accolades this season, including two “Dirt Late Model Dream” wins and a World 100 triumph.

The Dirt Track at Charlotte- https://www.charlottemotorspeedway.com