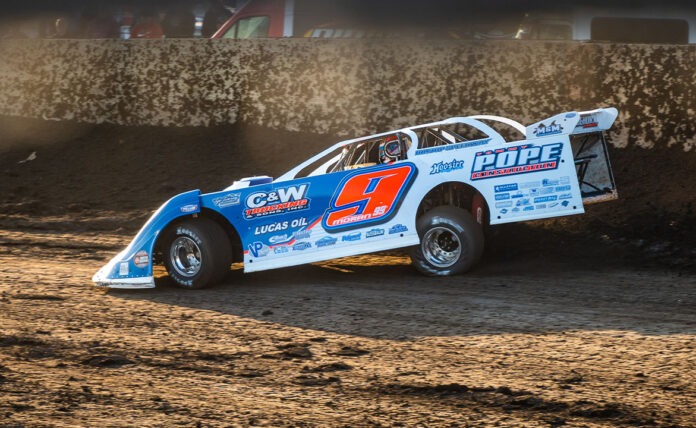 During his 75-race campaign, the Dresden, OH driver found Victory Lane four times with the World of Outlaws Late Models and 14 times overall for the year.

One of his four Series wins came during the World of Outlaws return to Bristol Motor Speedway for the Bristol Bash. “The Mailman” passed Ricky Weiss with less than 10 laps remaining to score the $25,000 victory.

The sword trophy he earned at “The Last Great Colosseum” meant more because it’s a milestone his family had yet to accomplish.

“That Bristol deal was pretty cool,” Moran said. “It was the first time going back to Bristol since I think 2002, and that’s one event where my dad [Donnie Moran] didn’t get a win. To get that win at Bristol and get that sword was an awesome feeling.”

While those fun victories in 2021 are something Moran won’t forget, he’s already looking ahead to 2022. He hasn’t cemented his 2022 schedule yet but does have a starting point. He’ll join the World of Outlaws when they open the year at Sunshine Nationals at Volusia Speedway Park in Barberville, FL, on Jan. 20-22.

“People just keep on coming out with these big-money races,” Moran said. “I don’t know what we’re going to do, but we’re going to go down to Speedweeks, Volusia, East Bay, and Volusia, and then we’ll just kind of see how it goes on from there.”

Despite not having his schedule nailed down, the Ohio driver is looking forward to one World of Outlaws weekend in particular—when the Series returns to Atomic Speedway April 22-23.

“I will definitely be there,” Moran said. “I love Atomic; I’m glad the World of Outlaws are finally going back there, and we’re racing for good money there.”

The Moran family and money go together, as his dad Donnie is known as the “Million Dollar Man.” One of the DIRTcar events he’s looking forward to the most is on June 9 at Eldora Speedway for the Eldora Million.

Donnie Moran won the only other Eldora Million in 2002, and Devin hopes to keep the event in the family name.

“We both have big smiles on our faces because if I can find a way to get that done and keep it in the Moran name, it would be career-changing for myself, Tye Twarog [Car owner], and Wylie [Brother],” Moran said. “If I can get that done, it’d be the greatest thing I could ever do, and it’d be really special.”

While there are six months until the Eldora Million, Moran and his crew are busy trying to get things ready for the season opener at Volusia. That meant his brother and crew chief Wylie stayed home while Devin raced in Cherokee Speedway’s Blue Gray 100 as part of the Drydene Xtreme DIRTcar Series.

“Unfortunately, he didn’t get to come down to Cherokee, but he was [in Ohio] getting stuff ready for Speedweeks and Sunshine Nationals in the middle of January,” Moran said.

“It’s a blessing in disguise; sometimes we bicker a little bit, but we love what we do getting to spend time together. We can communicate without really even communicating, so to have that type of relationship with my brother, not many people have that connection, so it definitely gives us an advantage.”

Moran hopes to keep that family connection going in 2022, no matter what type of schedule the season brings. Even though he hasn’t set a destination, he hopes the journey brings him more success.