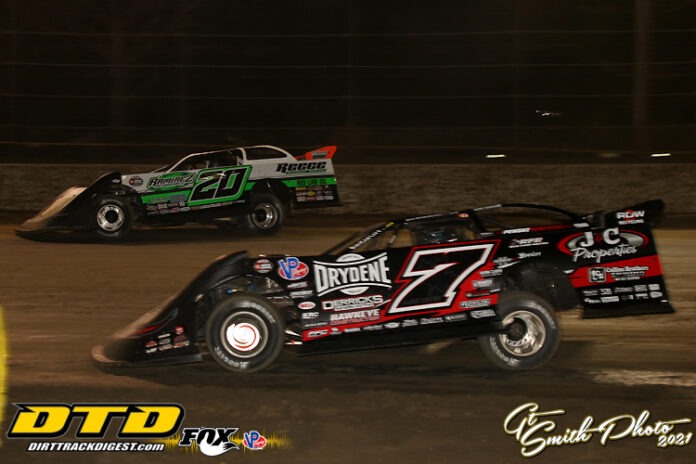 BARBERVILLE, FL– December 22, 2021 – A true Late-Model-Palooza kicks off the 2022 season highlighted by the World of Outlaws Late Models and DIRTcar Pro Late Models.

Six new full-time drivers will kick off their World of Outlaws title aspirations at Sunshine Nationals Jan. 20-22 at Volusia Speedway Park in Barberville, FL, while several rising stars will try to make their mark amongst the veterans with the DIRTcar Pro Late Models.

The Most Powerful Late Models on the Planet will battle in 40-lap Features on all three nights, each paying $10,000-to-win.

It’s only the second time the Series has raced at Sunshine Nationals, as Kyle Strickler and Kyle Bronson scored victories in 2021.

The 2022 event sees the return of four-time champion Josh Richards to the World of Outlaws after a four-year hiatus—as a teammate to Boom Briggs. The Shinnston, WV driver has more World of Outlaws wins than any other driver (78).

He’ll be joined in his quest for five championships by fellow four-time and reigning Series champion Brandon Sheppard, who’s one win away from tying the “Rocket Man” in the win column.

Richards isn’t the only driver trying to find Victory Lane at Sunshine Nationals, as five rookies start their World of Outlaws campaign at Volusia Speedway Park.

Max Blair, Gordy Gundaker, Kyle Hammer, Tanner English, and Gary Dillon are all fighting to be the top Rookie in 2022—and all but Blair are searching for their first Series win.

Those names, plus drivers like Ryan Gustin, Dale McDowell, and Devin Moran highlight a stout field of competitors hoping to take home the first checkered flag of the season.

The Chevy Performance 604 Crate-engine-powered DIRTcar Pro Late Models are also on the card for the third annual Late Model Palooza. Drivers will compete all three days of the event, chasing the $10,000 grand prize as victor of the 30-lap finale on Saturday night.

The competition clash continued in 2021 with the rise of Tennessee Crate racer Mack McCarter. The 28-year-old put on a passing clinic in January, driving 19th-to-second on Thursday and 20th-to-second on Saturday to clinch the division title by five points. Bronson was victorious in the Saturday finale for the second-straight year, defeating Super regulars through the field such as Cory Hedgecock, Jensen Ford and Mark Whitener.

2022 is poised to pit some of the best Crate and Super Late Model racers in the nation against each other once again at the World’s Fastest Half-Mile.