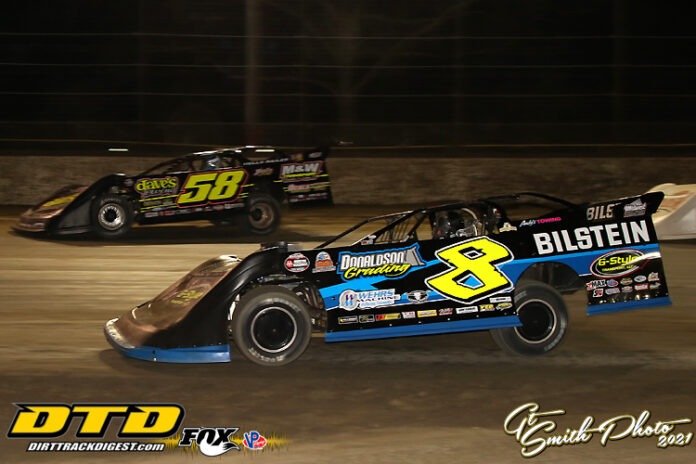 The World of Outlaws Late Models kick off their 2022 campaign in Florida, Jan. 20-22, as part of the Sunshine Nationals Late-Model-Palooza at Volusia Speedway Park.

Three nights of high-octane action will see The Most Powerful Late Models on the Planet battle for a $10,000 top prize each Feature, giving one driver the chance to walk away with $30,000.

This year marks the Series’ second appearance during the massive Late Model weekend. Home state hero Kyle Bronson, of Brandon, FL, picked up the inaugural Sunshine Nationals win with the World of Outlaws.

Joining the Series at The World’s Fastest Half-Mile are the DIRTcar Pro Late Models and 602 Late Models.

Here are top storylines to what for this weekend:

The Drive for 5: The Sunshine Nationals mark the start of a potential historic journey for Brandon Sheppard, of New Berlin, IL. He’s two wins away from taking the top spot on the all-time wins list and a championship at the end of the season would make him the first driver in the history of the Series to reach five titles.

He’s had a ton of success as The World’s Fastest Half-Mile racking up six victories, including a clean sweep of DIRTcar Nationals in 2019. Sheppard was consistent on tracks a half-mile or larger in 2021 — scoring one win, five top-fives, and nine top-10s.

“The Rocket Shepp” is also coming in hot. He scored two wins in New Mexico earlier this month in his family-owned car.

While “The Rocket Man” hasn’t been full-time with the Series since 2016, that hasn’t kept him out of Victory Lane. His last Series win came at the high-speed Bristol Motor Speedway half-mile last year.

Freshman Orientation: The 2022 World of Outlaws Late Models’ rookie class is one to keep an eye on this season with impressive resumes among them.

Six drivers have announced their plan to run for Rookie of the Year honors in 2022, all from different parts of the country.

Max Blair, from Centerville, PA, has the most World of Outlaws success out of the group, having already claimed three Series wins. However, Tanner English, from Benton, KY, is the only driver with an entire season of a national tour under his belt.

Joining them in the rookie battle will be Gary Dillon, from Wilson, NC, Gordy Gundaker, from St. Charles, MO, Jacob Ulrich, from Sand Springs, OK, and Kyle Hammer, from Clinton, IL.

As proven by last year’s Rookie of the Year, Tyler Bruening, a strong start to the season at Sunshine Nationals will go a long way to ending the season as the top rookie. While he didn’t pick up a win, his consistency catapulted him to third in points.

Volusia Tickler: No driver had more success at Volusia Speedway Park in 2021 than Kyle Strickler.

In January 2021, the “Highside Tickler” held off Late Model legend Scott Bloomquist to score his first career win at Sunshine Nationals and backed it up with a win to open DIRTcar Nationals last February.

In five races on the half-mile oval, Strickler only finished out of the top-five once—a sixth on the final night of DIRTcar Nationals.


Around the Turn: The Most Powerful Late Models on the Planet return to Volusia Speedway Park in Barberville, FL for DIRTcar Nationals, Feb. 16-19. CLICK HERE for Tickets.