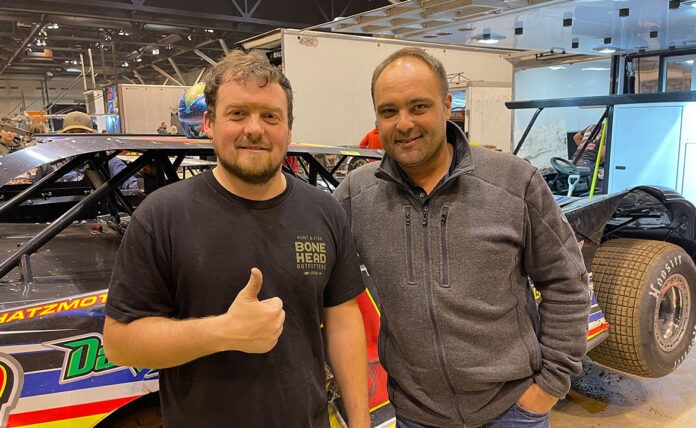 BARBERVILLE, FL – Legendary car builder Henry Ford once said, “If everyone is moving forward together, then success takes care of itself.”

Donny Schatz and Brandon Sheppard are no strangers to success—reaching the World of Outlaws’ pinnacle multiple times. While the two champions have built success on their own, they’re also making it together… And it all started with a beer.

The “Rocket Shepp” teamed up with the 10-time World of Outlaws NOS Energy Drink Sprint Cars champion in December, finishing fourth in Schatz’s Late Model at the Gateway Dirt Nationals. It was the second time the two joined forces for the event – the first coming in 2019.

Their dynamic partnership formed over drinks at DIRTcar Nationals earlier that season after they both wrapped up a day of Late Model racing.

“We were at the races at Volusia (Speedway Park) one night where afterward we were discussing the evening and having a beer, and we got talking about races here and there,” Schatz said. “We got talking about the [Gateway Dirt Nationals], which had happened a couple of months prior.”

That conversation led to an idea, and soon after a deal was made for St. Louis.

“He was [at Volusia] racing his Late Model, and we were just all hanging out one night, and the next thing you know, we had a deal put together for the dome,” Sheppard said.

The Fargo, ND driver stated it was an opportunity he had to take, knowing the chance of having a Late Model champion drive his car wouldn’t come often.

“If Brandon Sheppard says he’ll drive your car, I better jump,” Schatz said. “Obviously, Brandon’s a world class driver, and anytime you can go to a one-off event like that, and you can have the results you have, and the enjoyment and fun in it, that definitely makes it worthwhile.”

The tandem had immediate results that December as Sheppard finished second to Tyler Carpenter.

That conversation at “The World’s Fastest Half-Mile” continued the bond they share on and off the track. It’s allowed Sheppard to keep tabs on Schatz’s Sprint Car program.

“We’ve become pretty good friends over the past five or six years, me racing for Mark [Richards] and just hanging out with him and working on stuff,” Sheppard said. “I’ve really kept up with his Sprint Car deal a lot more since I got to know him. He’s just a great guy and for him to let me drive his car is cool, and we all have a lot of fun going and doing that.”

The friendship between the two drivers also extends to the Rocket1 Racing team, allowing Schatz to get a better feel for his car when he races with the World of Outlaws Late Models.

“The guys at Rocket, Mark [Richards], Brandon, Danny [White], all of them guys, it’s just who they are to help anytime I come and race,” Schatz said. “They seem to enjoy anytime we come around and race with them, and they make sure I get my car as close as I can, and if we need assistance with something, or telling us something we don’t know how to do, they always do that.

“They don’t owe me anything; they just do it because it’s who they are. It’s neat to have that relationship with them, and it makes me feel confident that I know I’m going to be halfway close because me going into a Late Model is like a duck being out of the water.”

Sheppard was quick to praise the World of Outlaws Sprint Car star and stated Schatz brings a different approach to driving a car with fenders.

“[Schatz] and Mark [Richards] talk more than anything,” Sheppard said. “We try to point him in the right direction to be able to get the job done, and he does a really good job for racing the Late Model as little as he does, so it’s fun to work with him and hang out with him. He brings a different mindset and a different aspect to it, so we probably learn some stuff from him too.”

While Sheppard only drives Schatz’s car once a year, Schatz still gets behind the wheel himself from time to time —most recently at the NGK NTK World Finals and the Wild West Shootout. The Fargo, ND driver wouldn’t rule out a full-time run once he’s done with Sprint Cars.

“I still enjoy it; I still have a lot of fun, but I also have the next generation in our family who’s dabbling into bigger cars now, and they might have that opportunity before I do.”

Schatz’s nieces are making their way up the racing ladder, trying to follow in Donny’s footsteps. He says there’s a possibility of seeing them behind the wheel of a family-owned car in the future.

“I think in today’s age, just like when I started racing, it’s hard to go drive for someone else because you can’t progress and learn unless you have someone that makes a huge commitment,” Schatz said. “I think obviously those kids are going to have to drive cars that are owned by the family for some time until they progress, and hopefully they progress quicker than I did. But yeah, there’s some opportunity there, and I think it’s the only way you can control what it is they do all the time and control the way they race. That’s probably in line with having some sort of ownership role.”

When you hear Schatz and Sheppard’s names, success immediately comes to mind. The two drivers keep moving forward both on their own and together, allowing the sensation of victory to take care of itself.