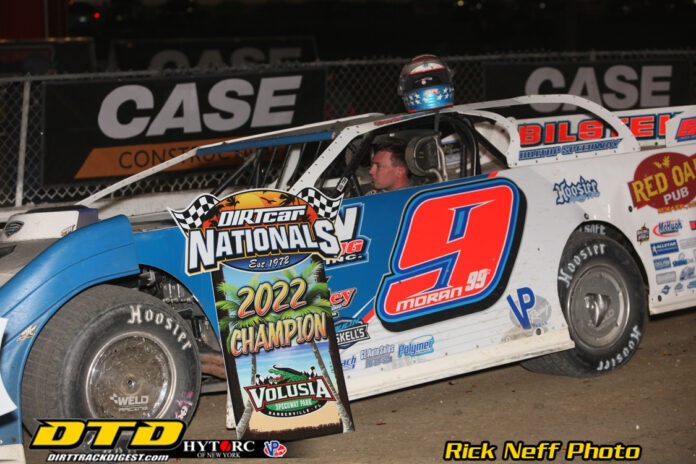 For 27-year-old driver Devin Moran, and his brother Wylie, those dreams are memories made together. But when Devin returns to World of Outlaws CASE Construction Late Models Equipment in April, his Tye Twarog Racing team will have a different look.

The conclusion of DIRTcar Nationals signified the end of Wylie’s time as Devin’s full-time crew chief to focus on his car detailing business. Despite taking on a new journey, the younger Moran is adamant he’ll still be at his brother’s side.

“It’s not the end,” Wylie Moran said. “We’ll always be together, and I’ll always be at the races quite a bit. I just won’t be at the shop every day, won’t be at every single race, but I’ll still be around making sure things are flowing alright.”

While the end of their time together is bittersweet, the bond between the two is stronger than ever. Devin couldn’t be more excited about Wylie’s new venture.

“Don’t get me wrong, he’ll still be going to a lot of races,” Devin Moran said. “I’ll be dragging his ass all over the country.

“He’s got a new journey he wants to venture off to, and we’re as high as we can get in this sport. I mean, we can win bigger and better races, obviously. But we’re to the point where we’re running really good, so I’m glad for him, and I’m excited for him to start his new deal, too.”

Devin’s excitement for his return to “The World’s Fastest Half-Mile” began before DIRTcar Nationals started, oozing with confidence from his 2021 triumph. Despite ending the week with a 12th-place finish, he’s taking his second “Big Gator” in stride.

“I was really excited to get here because of how fun it was to race here last year,” Devin Moran said. “To come out of here with a second big gator, we can’t complain.”

“The Mailman” built his run toward a second DIRTcar Nationals title on consistency. While he didn’t find Victory Lane, he opened the week with four straight podium finishes—a third and three straight seconds.

Moran stated it was a testament to his team and how dialed-in his Longhorn Chassis was throughout the week.

“I felt like we were really good all week,” Moran said. “We were good Friday and just had to start in the back, and I messed up in my Heat Race, and it was hard to pass [Saturday].

“I felt like we were really good [Saturday]. We just couldn’t do anything. But it’s the way it is; we take our wins and go home and be excited for the rest of the season.”

Wylie and the rest of Moran’s crew put their blood, sweat, and tears into the entire month. The younger of the two brothers reflected on their accomplishments, speaking with a hint of exhaustion.

It’s been phenomenal down here,” Wylie Moran said. “We’ve slaved away, we’re exhausted, worn down, but you just have to keep plugging away every day. We’ve had late nights, early mornings, long days; we haven’t had a day off in weeks.

“[Saturday] is the 36th day we’ve been in Florida, and it’s just a grind and to be able to win all of Lucas Oil Speedweeks, all of [DIRTcar Nationals], it’s just, it’s phenomenal.”

The sons of the “Million Dollar Man” Donnie Moran have already put together a career many people dream about. When Devin and Wylie look back into their time machines, they’ll be filled with memories about how they accomplished their dreams together.