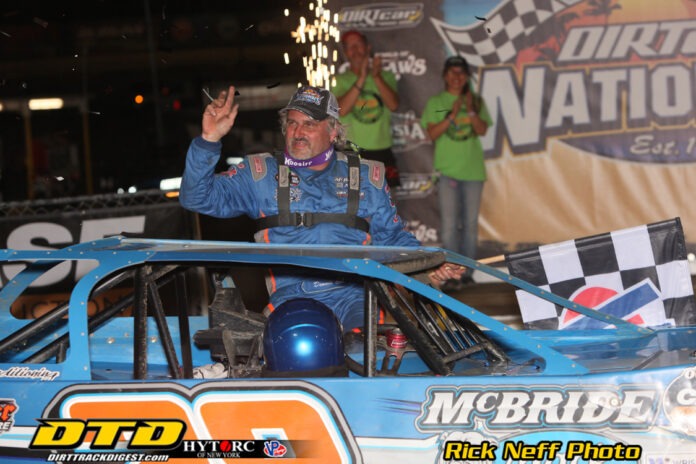 The Carpentersville, IL driver’s rise started in June when he won at Circle City Raceway and then continued throughout the year, picking up two more World of Outlaws wins, and carried into Florida where he got his first win at Volusia Speedway Park and earned five top-10s in six starts.

“We’ve been working really hard, especially since the middle of last season, and toward the end there, we really started running pretty good,” Erb said. “That really carried some momentum over into this season.

“To be able to go down [to Florida] and pick up a win and have some good runs, it definitely helps get things going.”

“The smaller track and the bigger track stuff is getting closer to where it needs to be all the time,” Erb said. “I’m pretty satisfied with going down there and getting a good start. We’ve got a good handle on some stuff, and we’re looking forward to the rest of this year.”

While Dennis Erb is the man behind the wheel, his accolades don’t happen without 2021 World of Outlaws Crew Chief of the Year Heather Lyne by his side.

Lyne is usually the first person to arrive at driver’s meetings throughout the season, and her attention to detail is key to the team’s organization.

What makes their accomplishments together even more impressive is Lyne travels on the road while juggling a full-time job—an electrical engineer for a defense contractor with the military.

“That’s my crew right there,” Erb said. “I count on her to get things done on the car, and I need her to get our tires, shocks, and springs ready and combinations.

“For her to be out on the road with me, she’s got to juggle around her full-time job, and it’s quite a chore for her to put in all the time and dedication into it.”

The early-season success from the dynamic duo has them primed for a chance to dethrone fellow Illinois competitor and reigning Series champion Brandon Sheppard.

The driver from the Land of Lincoln is confident in his abilities to become the 11th champion in World of Outlaws CASE Late Models history.

“To come out of Florida being right there, that’s kind of what the plan was for this year. Now we just have to go ahead and start putting it together each week. I definitely think we can battle for it this year.”