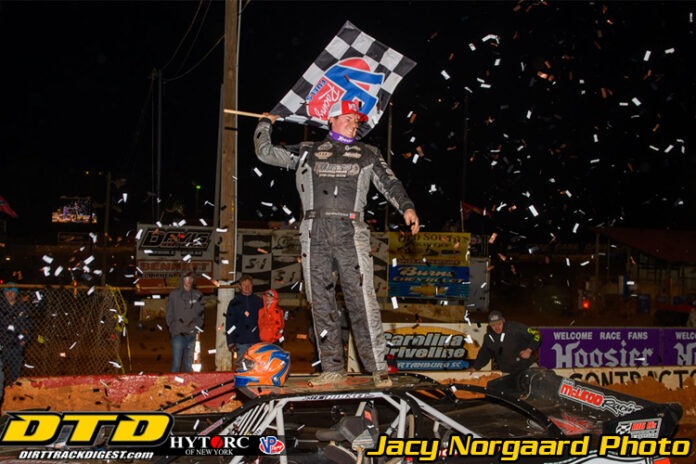 The Lancaster, SC driver seized an opportunity in traffic, muscling under Ryan Gustin and holding on for his first World of Outlaws CASE Construction Late Model Series win.

Brown’s triumph was a moment he dreamed of that finally became a reality, bringing his home state fans to their feet.

“I’ve always dreamed of doing this,” Brown said. “It’s a surreal moment. I got to thank everybody that’s behind me to get me here. It’s awesome and I’m damn sure going to enjoy it.”

“Downtown” celebrated as though a weight came off his shoulders in Victory Lane. He quickly climbed to the roof of his car, checkered flag in hand, fist-pumping the air with authority as confetti blew through the Carolina sky.

Brown’s knowledge of Cherokee’s red clay surface played a role in earning that celebration. After Gustin moved past Max Blair in traffic, Brown saw an opening on the inside where he dove under “The Reaper” to take the lead in Turn 2.

Brown’s win continues a year of celebration in 2022. It’s his first trip to Victory Lane since adding a new chapter to his life.

“The first race as a dad to get a win, it’s pretty badass,” Brown said.

While Brown celebrated the thrill of victory for the first time, he snatched it away from “The Reaper.”

Ryan Gustin crossed the line second, his first top-five of 2022. Once again, a World of Outlaws Victory Lane trip eluded the Marshalltown, IA driver who led a few laps before Brown snuck underneath him.

Despite letting the win slip away, Gustin is confident in his chances to find Victory Lane before the weekend is over.

“I slipped up a little bit and let him get under me,” Gustin said. “Anytime you can run good on the first night always boosts the confidence up heading into the final night.”

Blair also extended his lead in the battle for Rookie of the Year—20 points ahead of Tanner English, who finished eighth. He felt his lack of experience on a red clay surface hurt his chances of finding World of Outlaws Victory Lane for the fourth time.

“This isn’t something I’ve raced on much,” Blair said. “I just didn’t really know what to do with those lap cars and obviously made the wrong choice.”

Erb stated he was happy to keep his consistency rolling in the early part of the season.

“To move up a couple of spots and finish fourth is a good night for us,” Erb said. “I was hoping we could get a few more spots, but we just fell in line, and that was about all we had.”

Daulton Wilson, from Fayetteville, NC, rounded out the top five.

In one of the oddest Feature finishes of the season for the Drydene Xtreme DIRTcar Series regulars, the chase for the 2021-22 Series crown tightened by a single point.

Points leader Ben Watkins took a 16-point advantage into the Feature, lining up 12th on the starting grid – directly behind the man chasing him down for the title, Ross Bailes. The two held their general positions in the pack through the first half of the race; Bailes riding 8th and Watkins in 9th just after halfway. That’s when things got interesting.

Under caution with 28 laps complete, Bailes suddenly ducked down pit road for what eventually became an extended stop. The crew found a loose axle cap with the rear axle coming out and were forced to repair it, forcing them down a lap to the field once Bailes returned to the track.

Back inside the top-10, Watkins had moved up to seventh and looked promising to bag the solid finish and vital championship points. But with three laps remaining, the rear-end gave out on his Sandwood Racing #16W as he slowed down the backstretch and pulled off the track in Turn 4.

Watkins was scored as a DNF in 22nd position, Bailes one lap down in 21st. That one spot in the finishing order equates to a single-point difference in the standings, putting Bailes only 15 points back of Watkins with one race left to decide the champion.