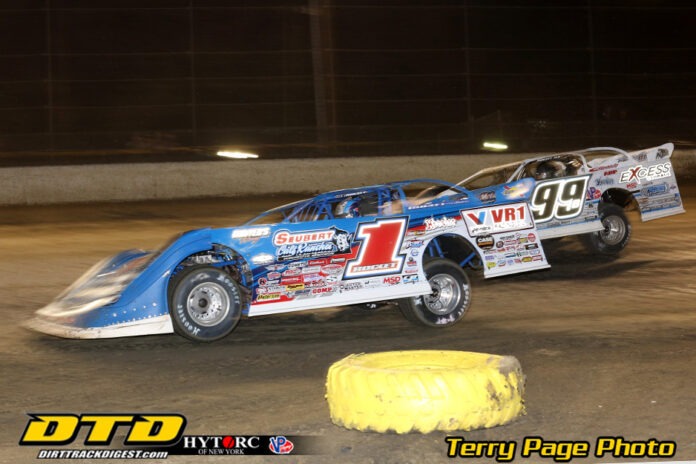 FOUNTAIN CITY, WI – The banks of the Mississippi River are ready to rumble as the World of Outlaws CASE Construction Equipment Late Models prepare for their highly anticipated return to Wisconsin.

The second annual Dairyland Showdown presented by Dynamic Concrete Resurfacing at Mississippi Thunder Speedway in Fountain City, WI, is back with a vengeance in 2022. The Most Powerful Late Models on the Planet will wage war for three nights in the Badger State with a potential $70,000 payday.

The weekend finale of the 2021 Dairyland Showdown lived up to its billing as Chris Madden bested Sheppard, Ryan Gustin, Kyle Strickler, and Bobby Pierce in a battle of slide jobs for all 60 laps.

Gustin, from Marshalltown, IA, said he’s excited for his return to Mississippi Thunder Speedway, calling it “one of his favorite tracks.” He’s still searching for his first World of Outlaws victory but may have an advantage with more laps at the track than any other Series regular.

“The Reaper” will have a stout field of competitors breathing down his neck for the $50,000 prize, including fellow Hawkeye State competitor and 2021 Series Rookie of the Year Tyler Bruening.

The Decorah, IA driver, is looking for redemption after last season when he broke while running in the top-five at Mississippi Thunder.

Like Gustin, Bruening is searching for his first career World of Outlaws win—an accomplishment he could achieve less than 80 miles from home.

Last season, Sheppard scored his 70th career victory at the Badger State track and hopes to climb another rung up the ladder toward World of Outlaws history.

He’s one win away from tying Josh Richards for most Series wins (78) and continues his push toward a fifth World of Outlaws championship. “The Rocket Shepp” scored two podium finishes at the Wisconsin venue in 2021.

Series points leader Dennis Erb Jr. will try to keep Sheppard at bay in his quest for a title. He already has a win in 2022 at Volusia Speedway Park and enters with momentum after a top-five and two top-10s at Cherokee Speedway.

The second annual Dairyland Showdown is a can’t miss event, as the USMTS Modified Tour joins the World of Outlaws all three nights for the first time ever.