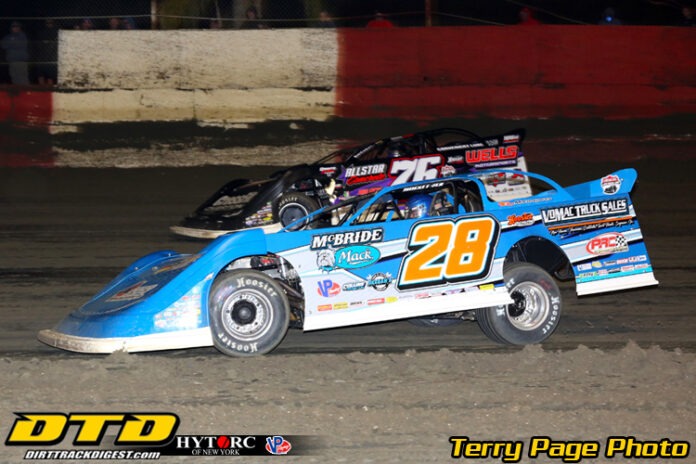 WAVERLY, OH – An invasion is coming to Ohio as the World of Outlaws CASE Construction Equipment Late Models prepare for a double-dip at Atomic Speedway.

The “Outlaw Invasion” is the first trip to the legendary Buckeye State facility for The Most Powerful Late Models on the Planet since 2018 and their first trip to Ohio in 2022.

Joining the World of Outlaws at the 3/8-mile track are the Legends and Sport Mods on Friday, and 410 Sprint Cars and Modifieds on Saturday.

Here are the top storylines to follow at the Outlaw Invasion:

Chasing Erb: World of Outlaws competitors are used to chasing a Blue Rocket Chassis in the standings, just not current points leader Dennis Erb Jr. He enters the weekend with the lead for the first time in Series history—30-points ahead of reigning champion Brandon Sheppard.

The Carpentersville, IL driver holds the top spot after a consistent start to 2022. He’s scored a win, three top-fives, and seven top-10s in eight races.

Erb is one of the drivers in the field with experience at Atomic already in 2022, finishing 10th in last month’s Lucas Oil Late Model Dirt Series event. He also has a fourth and sixth-place finish in two races on a 3/8-mile track in 2022—both coming at Cherokee Speedway.

Richards, aka “Kid Rocket,” won his two races at Atomic in 2015 behind the wheel of the Rocket1 Racing house car.

The Shinnston, WV, now driving for Series veteran Boom Briggs, hopes to rebound after a tough start with only three top-10s in the first eight races. He enters the weekend seventh in the standings—158 points behind Erb.

This weekend, he returns to Series competition as one of the favorites at a place he’s already found success. One of “The Mailman’s” eight World of Outlaws wins came at Atomic in 2017.

Moran has three top-fives and six top-10’s in Series competition in 2022 and hopes to grab his fourth overall win and win in front of his Ohio fans.

Man on a Mission: Four-time and defending Series Champion Brandon Sheppard has one mission this weekend—grab his first World of Outlaws victory of the season at Atomic Speedway.

Sheppard’s next Series win gives him a piece of World of Outlaws history—tying him for first on the all-time wins list with Josh Richards (78).

Heat Seeking Viper: Rookie of the Year contender Max Blair is on a hot streak entering the Outlaw Invasion at Atomic Speedway.

The Centerville, PA driver has three straight top five finishes, including a victory at last month’s Rock Gault Memorial. That win came at Cherokee Speedway, another 3/8-mile track like Atomic.

His recent success has catapulted him to third in the standings—38 points behind Erb. Blair also enjoys a 58-point cushion over Tanner English in the battle for Rookie of the Year.