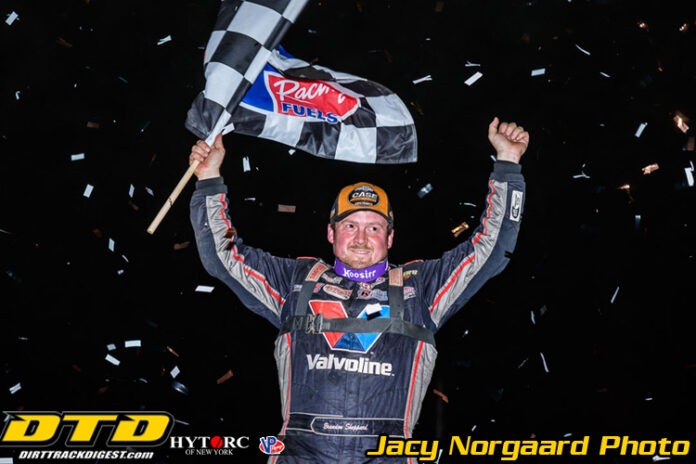 WAVERLY, OH – Actor Tom Hiddleston once said, “You keep putting one foot in front of the other, and then one day you look back, and you’ve climbed a mountain.”

He finally reached the peak of all-time wins Saturday night at Atomic Speedway, holding off a late charge by Dennis Erb Jr. to win the Outlaw Invasion—his 78th Series triumph. He’s now tied with Josh Richards for most wins all-time, a milestone that each four-time champion holds.

For Sheppard, it’s a moment he cherishes, and he is thankful for everyone that’s helped him on his journey.

“When I started, my dad and grandpa gave me everything I needed to get going, “Sheppard said. “I’m just thankful for them and Mark Richards picking me up back in 2012, and everyone that’s backed me for my whole career.

“I think it’s my first win [at Atomic], so that’s exciting, too. I feel like I’ve had a fast car here a lot and just haven’t been able to get the job done.”

Sheppard seemed poised to dominate the $15,000-to-win Feature after wrestling the lead away from Max Blair on a Lap 16 restart. The New Berlin, IL driver, pulled away from the field until he couldn’t carry the same momentum he had early in the race. That’s when Erb set himself up to strike.

The World of Outlaws points leader locked his car to the bottom of the track, pulling even with Sheppard a few times down the backstretch. Erb’s best shot came with three laps remaining as he slid the reigning champion in Turn 2, but Sheppard crossed him back over to keep control. The Illinois veteran may have had another shot, but a caution came out, putting Erb directly behind Sheppard on the restart.

“The Rocket Shepp” held on during the final three laps to win his first World of Outlaws Feature of 2022. Sheppard stated that his charge toward the front early in the race impacted his tires toward the end.

“I think I burned my tires up pretty early in that race trying to get the lead,” Sheppard said. “It was cleaning up and starting to take a little rubber getting into [Turns 1 and 2], and I think I was using a bit too much, and that slowed me down a bunch.

“I was kind of stumped out there, I didn’t know which way to go [in lap traffic], and then Dennis showed me the nose, and I was trying to change what I was doing, but he always races me clean.”

Erb crossed the line second—his fifth top-five of 2022. He felt the last caution took away his opportunity to get by Sheppard.

“The car was working really good while we were under green,” Erb said. “I really didn’t want to see that caution there at the end but [Sheppard’s] car was good too, and we fired off real good and gave it a shot.”

Erb’s runner-up finish extended his points lead for the second consecutive night—44 points ahead of Max Blair, who finished third, rounding out an all-Rocket Chassis podium.

The Centerville, PA driver thundered from his ninth starting position to the lead in 15 laps before falling to third at the checkered flag. Blair’s car got tighter as the race went on.

“If it was a 20-lap race, I feel like we had a car we could’ve won with,” Blair said. “Once the bottom started to give up a little bit, and I had to move up, I was just a little too tight to roll the center as good as what Brandon could.”

Gordy Gundaker crossed the line fourth, his first top-five of 2022. It’s the World of Outlaws Rookie of the Year contender’s best finish of the season.

“At the end, it seemed like we were just better than everyone in front of us,” Gundaker said. “I just had to pick and choose, and I got my way around Josh [Rice] and Devin [Moran] those last few laps to run fourth.”

Brandon Sheppard’s win on Saturday is one of many historical milestones in his career. But this time, it’s at the top of a mountain, cementing his place as one of the best in World of Outlaws Late Model history.