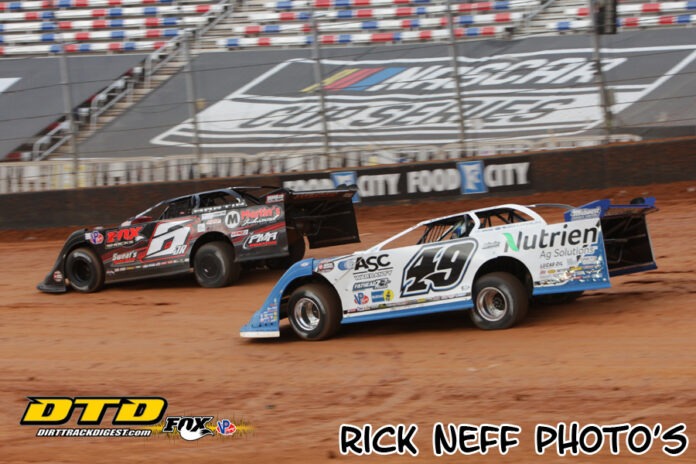 BRISTOL, TN– A rumble of high-speed thunder rolls through the Volunteer State as the World of Outlaws CASE Construction Equipment Late Models return to Bristol Motor Speedway for the Bristol Bash.

For the second consecutive April, The Most Powerful Late Models on the Planet hit the high banks of “The Last Great Colosseum” in search of a win at one of the world’s iconic facilities.

Joining the Late Models at the three-night spectacular is the World of Outlaws NOS Energy Drink Sprint Cars—the only time you’ll see both premier Series’ together until the World Finals in November.

The Bristol Bash kicks off Thursday, April 28 with a practice session before racing action begins on April 29-30.

Drivers will run a pair of 30-lap CASE Construction Equipment Features with $25,000 on the line, and the iconic Bristol sword.

Here are the storylines to keep an eye on entering the Bristol Bash:

After driving through the field to score back-to-back top-fives, Erb has shown he’s a factor in every race he enters.

His lone World of Outlaws win this season came at Volusia Speedway Park, a similar track to Bristol Motor Speedway in size. Erb hopes to keep his momentum rolling at a track he struggled at in 2021—his best finish is a 13th.

Pennsylvania Power: Blair is also off to a fast start in 2022.

In his last five World of Outlaws races, the Centerville, PA driver hasn’t finished outside the top ten, including a win at Cherokee Speedway and three top-fives.

While there’s a learning process in his first year on a National Tour, he tends to be better on the second night on a new track. This weekend will be the first laps he turns on the Bristol Motor Speedway surface, one he’ll have to tame to stay within striking distance of Erb.

Blair is also coming off a victory on Sunday night, scoring a $10,000 triumph at West Virginia Motor Speedway.

Rocket Repeat: Last season was the World of Outlaws CASE Late Models’ first appearance in Thunder Valley. The inaugural winner was one of the two most accomplished drivers in Series history—Josh Richards.

The “Rocket Man” inherited the lead from Jimmy Owens and held on to win the event in the Clint Bowyer Racing #14 car.

This season, he returns to Bristol behind the wheel of a car owned by fan-favorite Boom Briggs.

If Richards can find Victory Lane again this weekend, it’ll be his 79th career Series triumph, breaking the tie for most wins with reigning champion Brandon Sheppard.

He enters the weekend eighth in the points standings, 204 points behind Erb.

Rookie Shine: The Outlaw Invasion at Atomic Speedway saw Tyler Erb and Brandon Sheppard grab victories, but it was also a good weekend for the 2022 World of Outlaws Rookie Class.

Blair, Tanner English, and Gordy Gundaker scored a top-five over the weekend, while Kyle Hammer grabbed a top ten during Saturday’s event to go along with a Heat Race win.

While Blair has a stranglehold over the field in the battle for Rookie of the Year, they have shown they may be able to find Victory Lane on any given night as the season moves forward.

“Yung Money” is looking for his first win on dirt at Bristol and will make his first appearance in World of Outlaws CASE Late Models competition at the track this weekend.

The Elk Grove, CA, driver scored two Series wins in 2021 and finished third in his only appearance with the Series this year at Volusia Speedway Park.

Larson could take home a potential $100,000 if he sweeps all four Features at the track this weekend.

Smokin’ Hot: No driver has had more success at Bristol Motor Speedway in 2022 than Chris Madden.

“Smokey” has two victories at the half-mile already this year and has the chance to make it four by the end of the weekend. He also owns the track record.

The last time we saw the Gray Court, SC driver, he was in Victory Lane at Volusia Speedway Park and missed out on a DIRTcar Nationals “Big Gator Trophy” by one point.

Madden is searching for his 34th career Series Victory.

The last time “Superman” raced with the Series, he swept the World Finals at The Dirt Track at Charlotte and comes into the weekend with momentum.

Davenport scored his first win of 2022 last weekend at All-Tech Raceway and hopes to find a potential $50,000 in his bank account with a Bristol sweep.

Black Sunshine is Back: 2004 World of Outlaws Series champion Scott Bloomquist is expected to return to Series competition this weekend at “The Last Great Colosseum.”

“Black Sunshine’s” last Victory came in 2020 at Thunder Mountain Speedway, but the Mooresburg, TN driver, has been knocking on the door for a checkered flag recently.

Bloomquist scored a fourth and a sixth at Bristol earlier this year and hopes to bring home state fans to their feet with a win this weekend.

LAST TIME OUT: The World of Outlaws CASE Late Models are coming off a weekend at Atomic Speedway that saw Brandon Sheppard and Tyler Erb grab their first Series wins of 2022.

For Sheppard, it was his 78th career CASE Feature win tying him with Josh Richards for most all-time.