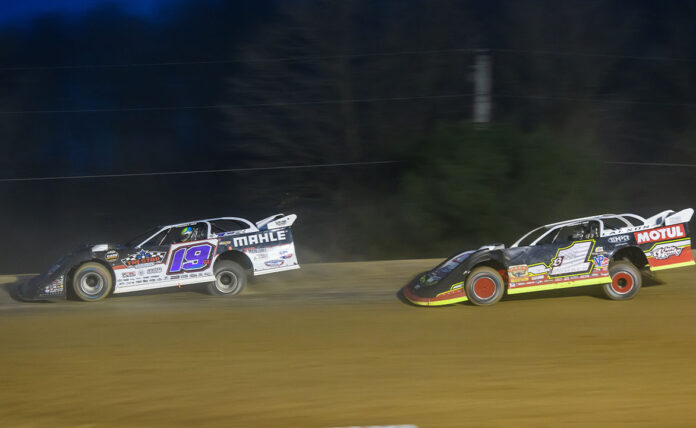 FOUNTAIN CITY, WI – A Late Model showdown on the banks of the Mississippi River awaits as the World of Outlaws CASE Construction Equipment Late Models make their first trip to Wisconsin in 2022.

Mississippi Thunder Speedway in Fountain City, WI, hosts a tripleheader for The Most Powerful Late Models on the Planet as part of the second annual Dairyland Showdown presented by Dynamic Concrete Resurfacing.

A potential $ 70,000-weekend payday is up for grabs in three nights of close-quarter racing on the 3/8-mile oval.

Joining the World of Outlaws CASE Late Models all weekend is the United States Modified Touring Series—the first time these Series’ will race together.

Here are some of the storylines entering this weekend’s Dairyland Showdown:

Davenport’s triumph was his third win in eight days and third, in his last four World of Outlaws CASE Late Models starts.

The Blairsville, GA driver will join the Series again this weekend at Mississippi Thunder, searching for his 12th career Series victory.

For Weiss, it was his third career Series win and first since 2020. His triumph was also the Headingley, MB driver’s first win at Bristol Motor Speedway.

Point Battle Tightens Up: Max Blair’s seventh-place finish Saturday tightened the gap between himself and Dennis Erb Jr. in the points standings.

Erb enters the second annual Dairyland Showdown with a 38-point lead over Blair.

Both drivers have a World of Outlaws victory in 2022. Erb found victory lane at Volusia Speedway Park during DIRTcar Nationals, while Blair earned his triumph at Cherokee Speedway in March.

The Carpentersville, IL driver hopes for better luck at Mississippi Thunder this season after finishing outside the top-10 in both of 2021’s events.

Blair will run his first laps around the 3/8-mile oval this weekend.

Hot Hammer: One driver who leaves the Bristol Bash with momentum is Kyle Hammer. The Clinton, IL driver scored two top-10s and led a few laps.

The Rookie of the Year contender’s runs at Bristol catapulted him into fifth in points.

While he trails Blair in the Rookie of the Year race, Hammer is starting to find his groove as the Series moves to Wisconsin for the first time.

“The Reaper” has plenty of laps around the 3/8-mile oval on the USMTS and had two good runs during the Dairyland Showdown in 2021.

The Marshalltown, IA driver finished second on night two last season and was running third before trouble struck him on night one.

He enters the weekend eighth in the standings and hopes a taste of familiarity puts him on the right track for the rest of the season.

Look Out for Bruening: Mississippi Thunder Speedway is as close to a home game as Tyler Bruening will get in 2022, as Decorah, IA, is about 90 minutes away from the track.

Bruening had a top-10 on night two of last year’s Dairyland Showdown, part of the many consistent runs leading to the 2021 Rookie of the Year award.

He’s worked his way up to fourth in the standings—110 points behind Dennis Erb Jr. and only four points behind Tanner English for third.

A win this weekend would be his first career World of Outlaws Victory.

Larson scored a top 10 finish at Atomic Speedway earlier this year, a track like what he’s racing on this weekend.

This weekend, like Bruening, a victory will be Larson’s first career World of Outlaws win.

Bobby’s Back: For the first time in 2022, Bobby Pierce will return to World of Outlaws CASE Late Models action at Mississippi Thunder Speedway.

“The Smooth Operator” won his first two Series events in 2021—both extra distance races. He’ll have the chance to do it again Saturday in the 75-lap, $50,000-to-win finale.

Last season, the 2021 DIRTcar Summer Nationals champion scored a top-10 on night one of the 2021 Dairyland Showdown. A win would be his third career World of Outlaws victory.

May 5-7 at Mississippi Thunder Speedway in Fountain City, WI

PREVIOUS WINNERS
2021 – Brandon Sheppard on May 7, Chris Madden on May 8