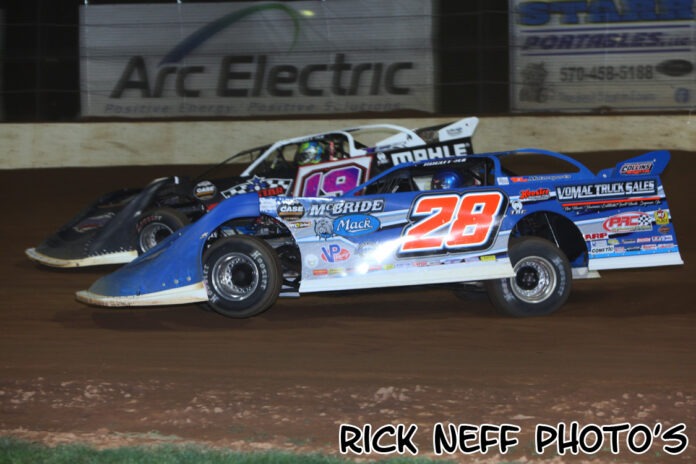 MARION CENTER, PA – May 20, 2022 – Dennis Erb Jr. proved one thing to the World of Outlaws CASE Construction Equipment Late Model field Friday at Marion Center Raceway. The road to a World of Outlaws Championship goes through Carpentersville, IL, in 2022.

One night after finishing second to kick off a three-race Pennsylvania swing, the current Series points leader struck back with a vengeance, dominating the Connor Bobik Memorial.

Erb wasted no time grabbing the lead, powering off the cushion in Turn 2 past 2011 Series champion Rick Eckert.

He held off Shane Clanton on numerous restarts en route to the $10,000 victory—his second World of Outlaws triumph of the season and fifth win of 2022.

The veteran driver knew getting ahead of Eckert at the start was a key to victory.

“You definitely needed to get out front,” Erb said. “We had a good start. We were able to roll up through the middle and just carry speed like we needed to. After that, it was kind of just hitting our marks and keeping it upfront.”

The importance of Erb hitting his marks wasn’t only key on green flag runs but also restarts. The Illinois campaigner had to defend his lead from Clanton several times.

“Once we got rolling there, I was rolling pretty good,” Erb said. “You get in a little rhythm and stuff, and you don’t want to see any of those cautions come out. But we fired off real good, and everything went good after that.”

Clanton held on for second, giving him back-to-back top-fives in his return to World of Outlaws competition.

The Zebulon, GA driver worked the outside late in the race, trying to find a way past Erb.

“I was trying to move around because I can’t drive through him, so I was trying to hunt,” Clanton said. “My guy was telling me after a caution after five or six laps, I’d pull away, so I’d give myself those three or four laps, and then I’d try to move around and go a different place than he was.

“It was working there in [Turns 1 and 2], but I couldn’t get [Turns 3 and 4] down, but overall, a good night. The Capital Race Car was good all night, so hopefully, we can build on that and carry it on to [Saturday] at Port Royal.”

Four-time Series champion Josh Richards finished third, his third consecutive podium. He thundered through the field on the inside lane in the first 20 laps, driving to third from his 12th starting spot.

“Kid Rocket” felt a caution after halfway halted his momentum.

“I didn’t want to see that caution,” Richards said. “I was able to get a good rhythm and sneak up on some of those guys, and once the caution came out, I think the track changed a little bit, and that advantage went away.

“I’m just thankful to get up through there and have a good enough car. I feel like we’re making some strides, and hopefully, we can put something together and keep this consistency up.”

Gordy Gundaker crossed the line fourth—a turnaround from Thursday’s race at Bloomsburg, where he finished 13th.

The St. Charles, MO driver stated he was starting to reel Richards in at the end but didn’t have enough momentum to get by.

“I was catching Josh [Richards] at the end in [Turns 1 and 2]; he was just better in [Turns 3 and 4],” Gundaker said. “Overall, a great night, especially after [Thursday] getting tore up, so a top-five is just what we needed going into Port Royal.”

From Mahaffey, PA, Jon Lee rounded out the top five in only his third race of the season. It’s his best career finish in World of Outlaws competition—a spot he never thought he’d be in.

“I never dreamt that we would’ve run as good as we did [Friday],” Lee said. “We were trying to save tires, and I definitely think we were on a softer tire than the other guys, but the car was definitely good.”

Dennis Erb Jr.’s consistency continues to shine no matter where the World of Outlaws CASE Late Models visit. While there’s a long way to go until Charlotte, if he keeps this pace up, it’ll be a long, uphill climb for his opponents the rest of the season.

UP NEXT: The World of Outlaws CASE Late Models head to Port Royal Speedway in Port Royal, PA on Saturday, May 21.