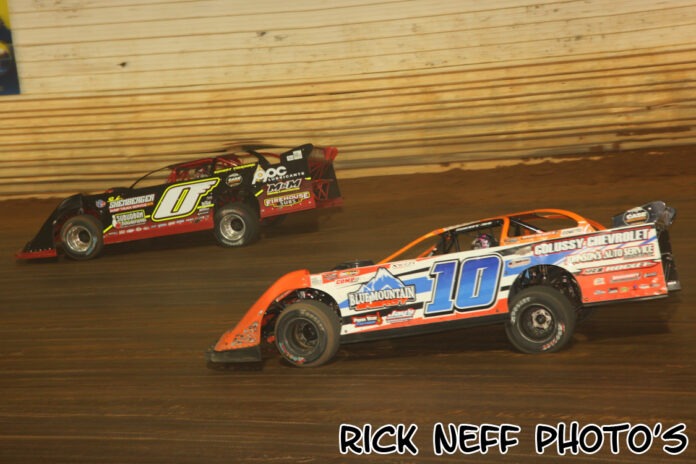 Miley rose from his fifth starting position under the bright lights of the “Speed Palace,” working the bottom of the racetrack. He picked off cars one by one until he climbed to second place.

He pulled alongside “Scrub” for the lead as the Feature’s only caution slowed the field. That’s when “The Jet” lived up to his nickname, thundering under Eckert in Turns 1 and 2 to take a lead he wouldn’t relinquish.

The Pittsburgh, PA, driver thought that caution may have kept him from reaching the $10,000 prize as he tried to anticipate Eckert’s next move on the restart.

“I was a little bit worried,” Miley said. “I kind of just got beside him, and I was worried he would move down on me and take my line away and get me messed up. Luckily, he couldn’t stay down there because he tried to move down, but he couldn’t.”

Miley needed 21 laps to take the lead but wasn’t sure of his car’s strength. He stated that everything came together at the right time.

“The car was good, and I didn’t really expect to be that good,” Miley said. “We’ve been gaining on some stuff, and [Saturday], everything just came together.

“Once I got [to second] and saw Rick leading, I knew I could get him, and I did and just tried to maintain a smooth line and just keep the car under me.”

Gregg Satterlee finished second, one spot short in his quest for a second National touring win this season at Port Royal.

After redrawing eighth before the Feature, the Indiana, PA driver felt luck wasn’t on his side.

“I’m not sure that more laps would’ve made a difference,” Satterlee said. “The redraw probably didn’t help us too much starting eighth, and I’m not sure if that caution helped me or hurt me. But all in all, we went forward and finally finished a race for the first time this weekend.”

Max Blair, the top Rookie of the race, rounded out the all-Pennsylvania podium. He moved up multiple positions in the final 10 laps to cross the line third. The Centerville, PA driver wished the track was slicker than at the start.

“We had a really good car once it got slippery, even in the Heat Races,” Blair said. “I wish we were starting the race right now on this racetrack, but that wasn’t the case, and we came home with a podium, so I’ll take it.”

The third is Blair’s second podium of the weekend and the fifth of the season in Series competition. He also cut the deficit in the battle for the championship to 100 points behind Dennis Erb Jr., who finished ninth.

Eckert faded to fourth at the checkered flag after leading the first 20 laps of the Feature. “Scrub” stated he knew he had an uphill climb once he caught the tail of the field.

“I knew we were in trouble once we got into traffic,” Eckert said. “I couldn’t turn down in the corner to try and pass them lap cars. So, my only option was to go around them on the outside.

“Then we had that caution, and I was like, oh, that might help us some. My crew had told me they were coming on the top, so I moved up there, and I wasn’t very good and let Miley by. Then I moved back down and thought I could hold my own, but when I got close to cars, I just couldn’t turn left off the corner.”

Colton Flinner, who has three wins at Port Royal in 2022, rounded out the top five. The Allison Park, PA driver, felt he needed a better start to the night to put him in a position to win.

“I needed to qualify better,” Flinner said. “I put myself in a hole and had to dig myself out of it. I’m happy with a solid top five with the World of Outlaws, and hopefully, we can keep this momentum up.”

Jared Miley’s win Saturday at Port Royal is a memory he’ll cherish for the rest of his career. It also fixed his heartbreak from 2020, with $10,000 in his bank account.

UP NEXT: The World of Outlaws CASE Late Models return to the Buckeye State May 27-28 for a Memorial Day spectacular at Sharon Speedway in Hartford, OH.

If you can’t make it to the event, watch live on DIRTVision – available either online or through the DIRTVision App. 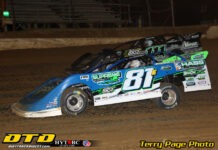