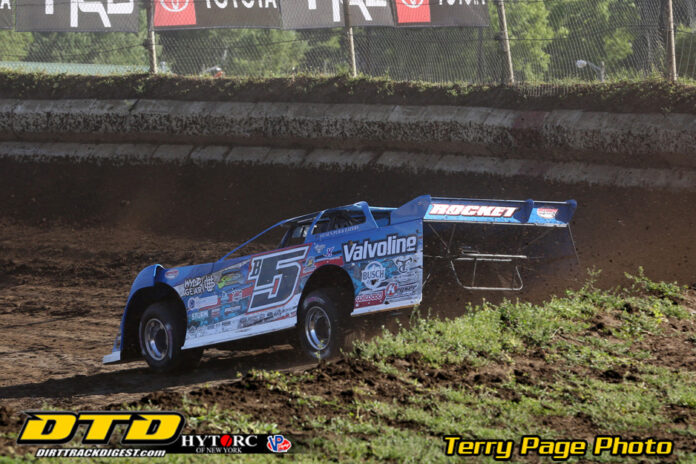 JACKSONVILLE, IL – In 2012, Brandon Sheppard etched his name into the World of Outlaws CASE Construction Equipment Late Models history books—claiming his first Series win at Belle-Clair Speedway behind the wheel of his family-owned #B5 car.

Behind the wheel of that same car, 10 years later, Sheppard earned himself another piece of World of Outlaws glory.

The New Berlin, IL driver, led the final 13 laps of Sunday’s Wild Man Kelly Classic at Jacksonville Speedway to earn his 79th career Series win—breaking the tie with Josh Richards for most wins all time.

It’s a celebration the “Rocket Shepp” wouldn’t forget, as he rose from his car in Victory Lane, raising two fists into the air as the crowd let out a thunderous roar.

After finding previous success at the track, Sheppard knew he’d have a car to beat at his home state venue.

“Our car has been really good at Jacksonville every time we come here,” Sheppard said. “I’ve won the past two DIRTcar Summer Nationals races here. So, we were definitely excited to get the B5 out.

Sheppard started fifth in the 40-lap Feature and slowly worked his way through the field, passing Shane Clanton for second on a Lap 19 restart.

He inched his way closer to Babb each lap before throwing a slider in Turn 4 to beat the Illinois veteran to the start-finish line—a pass worth $10,000.

“Then I got back up on top, and he bobbled once in 1 and 2, and I got close, and then he bobbled in three and four, and then I was able to get a good run and slide him. It was an awesome race.” `

Babb settled for second after leading the first 27 laps. The Moweaqua, IL driver, stated he had a good car, but the bobble in Turns 3 and 4 cost him his chance at a victory.

“It was just a good pass on [Sheppard’s] part,” Babb said. “I bobbled and opened the door for him, and he took advantage of it.

“It’s always a lot of fun coming here to Jacksonville to race with them guys. We were just pleased to death to be on the front row and lead some laps. We definitely haven’t had the best start to this year, but we’re getting things rolling, and it’s going upwards.”

Clanton rounded out the podium, his fourth World of Outlaws top five of the season. While the Zebulon, GA driver, came up short for the win, he stated he had fun racing up front with Sheppard and Babb.

“This place is pretty fun to drive that cushion like that,” Clanton said. “Actually, you can run up on the wall a little bit. Overall, it was a good night, just didn’t quite have enough.”

Tanner English, Sunday’s Fox Factory Hard Charger, finished fourth after starting 12th. While he stated he’s happy with his top-five finish, he knows the importance of putting an entire night together.

“I dug myself a hole in Qualifying and I just had to dig out of it all night,” English said. “We had a good Heat Race. I was probably one of the only cars to pass anybody in the Heat Race. I don’t know how many people we passed [in the Feature] but it was a bunch. The car was pretty good, but like I said I just need to qualify better.”

Jason Feger finished fifth, his third top five finish of the weekend. The Bloomington, IL driver worked his way through the field, before fading after something broke on his car.

“We don’t get to race here very much, but it seems we put on one heck of a show,” Feger said. “It was a little top dominant, and I had a really good car early, but right before the Lap 27 yellow, something was going on, and I couldn’t figure it out.

“We had a piece of body bracing get loose, and it was underneath the right rear tire. I can’t believe it messed me up that bad, but it slowed me up just enough to where I was hanging on out there.”

Dennis Erb Jr. finished ninth, extending his points lead for the third time this weekend. He leads by 148 points over Max Blair, who finished 11th.

Brandon Sheppard’s triumphant Victory at Jacksonville Speedway is a moment he’ll cherish for the rest of his career, celebrating with family and friends in Victory Lane. Sunday proved no matter what car he’s driving, a win on an Illinois bullring goes through the “Rocket Shepp.”

UP NEXT: The World of Outlaws CASE Late Models kick off their Northern swing with a trip to River Cities Speedway in Grand Forks, ND on Friday, July 15.