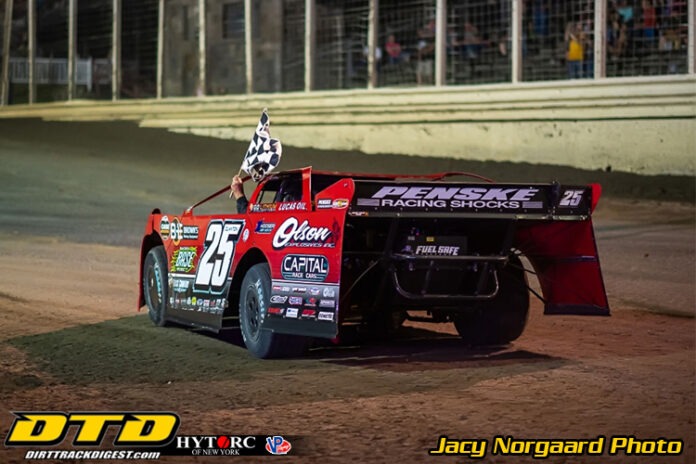 However, not since 2019 with the Series.

He and his Skyline Motorsports team had been searching for the final equation since returning to the tour in May. And on Friday at River Cities Speedway, he nailed it, leading all 40 laps to earn his first World of Outlaws win of the season.

“We came full circle,” Clanton said. “We hot lapped good, qualified on the pole, won our Heat, started on the pole, and won the race. When you have the fastest car in Qualifying and the [Heat Race], you’re supposed to do that.

“I really thought we had the best car in the race; we just needed to be in the right lines. They said [Mike Marlar] was coming, but I didn’t move up until I had to, and I could just mash the gas. It was just right timing, I guess.”

While Clanton led every lap, Dennis Erb Jr., who ended up second, challenged him for the win in the race’s late stages.

The Carpentersville, IL driver swung to the bottom of Clanton’s Capital Race Car with two laps to go as the two waged war for the lead. However, Clanton, the 2015 Series champion, shut the door on Erb’s momentum in Turn 4, allowing him to pull away for the win.

“Well, I saw a blue car, and I figured it was Dennis,” Clanton said. “I know Dennis runs the bottom real good, better than anyone in the business. I knew he was probably there and shut the door on him, and I caught a lap car on the last lap and said I’ve got to go because if I miss it, Dennis is going to drive by me off Turn 4.

“I went to the middle, and I could just bend the floorboard then. It’s probably where I should’ve been the last five or six laps anyway; I just didn’t know to get up there.”

While Erb came up short on the victory, the veteran Late Model driver kept his consistency rolling with his 12th top-five finish of 2022.

“The car was good. We were just trying to get to the right spot there to make the move,” Erb said. “We got up underneath him, and he closed the door on me, but like I said, we had another good car tonight, and another good finish for us. So, we’ll just take this and move on to [Saturday].”

His second-place finish also extended his points lead to 164 points over Max Blair, who finished 10th.

The Winfield, TN driver charged into the top five, using the outside line to pick off cars. He stated he had more room to maneuver his Longhorn Chassis as he moved toward the front.

“I found my groove there, and it wasn’t really the top that was working so much, just that when I got to the front, there were more lanes,” Marlar said. “It was kind of tight there on the front straightaway every lap, so whatever kind of momentum you would have, you’d have to break.”

Tyler Bruening, the 2021 Series Rookie of the Year, finished fourth. The Decorah, IA driver, didn’t believe his car was good enough to compete with Clanton and Erb for the $10,000 prize.

“We were really good, just not quite good enough,” Bruening said. “I had tremendous drive off the corner. I was good getting in, but just through the center, I’d lose the car every once in a while, a little bit.

“The car was really good. We made some changes after [Qualifying] to make it a little more similar to what Shane [Clanton] had, and that really seemed to help me and the car a lot.”

The Benton, KY driver stated that although he finally had a good Qualifying run, he missed out on crucial adjustments throughout the night.

“The car was good, and that’s all we can ask for,” English said. “Starting up front, that’s half the battle, and I just didn’t do anything to the car that I needed to do.

“I was scared to make some adjustments, and I won’t be now because I know that’s what it needed. So, I think we’re alright, and we’re heading in the right direction.”

Shane Clanton’s ability to put an entire night together allowed him to return to winning form with the World of Outlaws CASE Late Models.

UP NEXT: The World of Outlaws CASE Late Models travel to I-94 Sure Step Speedway in Fergus Falls, MN on Saturday, July 16, for night two of the Upper Midwest triple header.