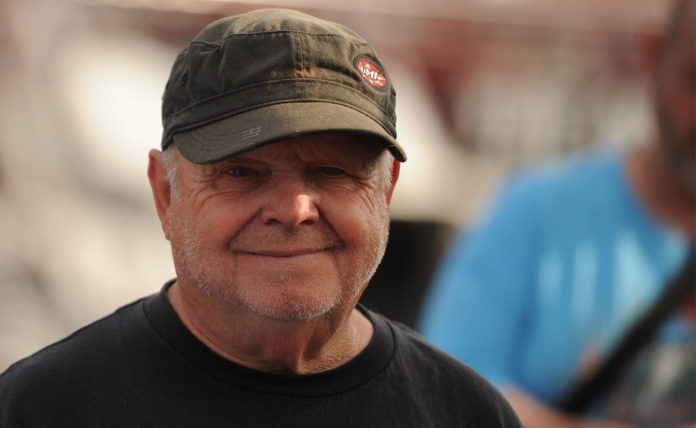 CONCORD, NC – At 76 years old, Bobby Allen has the urge to drive a Sprint Car again after stepping out of the car more than 20 years ago.

However, the car he’ll be driving is a little different than the one he was used to. It’s not real.

Allen plans to eventually join his grandson Logan Schuchart and son Jacob Allen in competing in the World of Outlaws NOS Energy Drink Sprint Car iRacing Invitationals. It allows him to feel the thrill of racing with no consequences and please the fans that want to see him do it. Although, he’s not expecting to return to his winning ways right away.

“I think it’s funny everybody says, ‘Hey, Bobby, you should run that,’” Allen said. “They miss [me] racing. They want to see [me] back there racing. I always called it like being a prize fighter who’s been out for 30 years. Alright, I’ll come back and get in that fight. You know what’s going to happen? You’re going to get the shit beat out of you. So, I look at the iRacing the same because I haven’t done it. These kids have done it. I’m going to get one and try to get some practice.”

In traditional Allen fashion of always building his own racing equipment, he’s constructing his own custom sim rig to compete. He and other members of the Shark Racing team are trying to build a cheap simulator setup out of aluminum for not only him to use, but to also potentially replicate and sell.

Schuchart and Jacob Allen also have their own custom sim rigs. Schuchart cut up the chassis of his Drydene #1s Ironman 55 winning car and turned it into a rig with three monitors directly in front of the cockpit and sim racing pedals and steering inside. He’s already earned two fourth-place finishes in a row with it. And while it wasn’t in his custom rig, Schuchart won the World of Outlaws NOS Energy Drink Sprint Car eDirt Racing Shootout at Eldora Speedway on CBS Sports Network.

Allen debuted his custom rig, which is almost identical to Schuchart’s, during the April 17 Invitational race at Eldora Speedway. His Shark Racing crew member Tyler Garber helped him build it during the team’s down time.

“There’s not a whole lot going on at the shop and he’s been wanting to learn how to weld and things like that, so I kind of let him do his own thing with it and build it up the way he wanted to,” Allen said. “I’ve just been focusing on exercising and eating healthy and just kind of preparing myself for whenever they give us the green light to go racing and jumping on that simulator so I can get laps and still have that feeling of racing in some sort of sense.”

To him, and Schuchart, iRacing has become another method for them to stay sharp. They’ve become the new race day for the Shark Racing team. It’s keeping the team busy and keeping Bobby Allen busy. Instead of thinking about tires and engines, Allen is now focused on what computers and monitors will best help his drivers’ efforts.

“He’s pretty into it,” Jacob Allen said. “I’m excited for him to do it. He’s been keeping pretty busy and has been pretty focused on finding the best computers and things like that. I’m glad that he’s staying busy that way and it’s something to entertain him.”

Bobby Allen is looking forward to getting to race against his son and grandson but wouldn’t say just yet that he’d beat them. He joked that the three of them will go to a go-kart track and Allen, a world champion go-kart racer, said he’ll think he’s putting down good laps, but then Allen and Schuchart will drive by him 2mph faster in the corner.

“I said, ‘Bobby, you might want to forget about it. You’re a little bit old now,” he said with a chuckle.

In his first time trying a simulator, Allen said he was about a second off of Schuchart’s time. Although, he acknowledged Schuchart has been using iRacing for a while. The experience gave him a new level of respect for the drivers that are good at the simulator. To him, it would probably be easier to get back into a real race car.

“What’s funny about that, because I haven’t raced a race car in 20 years, it’s actually pretty stressful to try and keep them things straight and not be all over the place,” Allen said about iRacing. “You can throw them against the wall as hard as you want because you’re not going to get hurt crashing them, but you still don’t want to hit the wall anyway. I don’t see how them guys do it. I ran the laps with nobody else on the racetrack and the only place I could run was high. Everywhere else I was zig zagging. That’s why when they showed Bubba Wallace (on national TV) sweating, that’s how it is. It’s real stressful to try and keep the car right and go fast. It’s definitely the closest thing to real racing.”

While it can be stressful, iRacing gives the 30-time World of Outlaws NOS Energy Drink Sprint Car Series winner the same thrill he felt when driving his real #1a Sprint Car. At 76 years old, Allen is ready to have fun racing again.