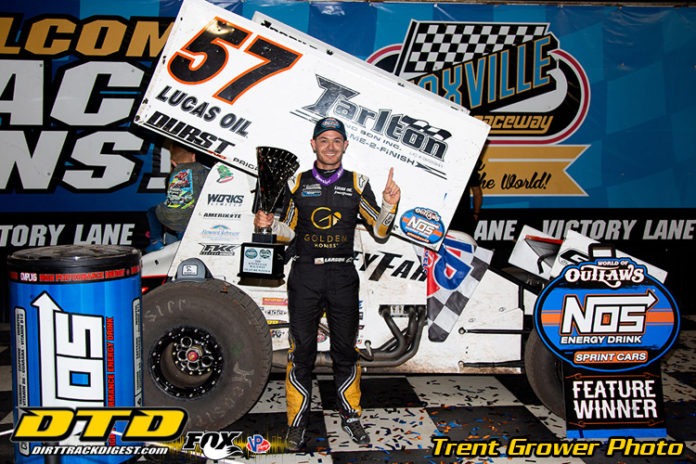 In his return Friday night at Knoxville Raceway, Larson, again, found Schatz standing in the way of another victory. This time, he made sure the Fargo, ND driver was out of rage on the final lap to secure his first win at “The Sprint Car Capital of the World” during the first night of the Brownells Big Guns Bash doubleheader.

“It’s awesome,” Larson said in Victory Lane. “It’s a pleasure to drive for (car owner and crew chief) Paul Silva and everybody who helps out on this team.”

He had already accumulated three wins in four days with Silva while racing down south, before the night. That momentum carried over to the iconic half-mile track, where Larson and Silva struggled in their last two races there. They finished 10th when the Series returned to racing at the track in May and failed to qualify for the Knoxville Nationals last year.

This year, they’ve found their rhythm. Larson didn’t show it early on in the night, though. While David Gravel set Quick Time for the third time this year, Larson qualified seventh in his flight. He was able to make it up to second in his Drydene Heat Race, behind Gravel, but settled for a sixth-place finish in the DIRTVision Fast Pass Dash – won by Gravel.

When it came time for the 25-lap Feature, Gravel – who won the Knoxville race in May – and Schatz appeared to be the favorites. Gravel had dominated everything up until that point and Schatz’s speed improved as the night went on.

The Tony Stewart/Curb-Agajanian Racing driver showed that in the opening laps of the Feature by taking the lead from Gravel on the second lap and driving away from the field.

Larson was putting on an impressive performance behind them, darting his way from sixth to third on the first lap. Five laps later, he worked his way around the outside of Gravel to take second. A caution on Lap 6 then put Larson on Schatz’s bumper.

On the restart, Larson launched ahead of Schatz to take the lead, but Rico Abreu flipped in Turn 2 before the lap was completed, giving Schatz the lead back. When the race went green, again, Schatz was ready for Larson. He had a two-car length lead on Larson by the time they exited Turn 2 and pulled away further the next corner.

Schatz looked to be in command of the race and on his way to another Knoxville win. However, the ever-adaptable Larson found a new line that cut Schatz’s lead from half a straightaway to nothing in about three laps.

“Before the first caution I could enter above the holes here in (Turn) one and diamond the corner off of (Turn) two and I felt like I could maintain with him (Schatz),” Larson said. “Once I got into second, Donny was still following the top and I was able to make that line work to get the run off of (Turn) three and pass him.”

Once he took the lead from Schatz with 15 laps to go, Larson ran to home base on a home run swing. Lap cars did little to slow him down. The only hinderance he faced was when his nose wing fell down on the final lap, giving him little downforce on the front of his car. It caused him to miss his marks, but they were tiny errors in the overall scope of the race. The Elk Grove, CA driver crossed the finish line 3.1 sec. ahead of Schatz, bringing the crowd of fans to their feet – Knoxville’s first time with fans at a World of Outlaws race this year – and giving Johnny Gibson a special memory for his 2,000th consecutive race.

“Knoxville is one of my favorite tracks,” Larson said. “Paul Silva has been working his butt off. I’ve been complaining to him a lot. But we’re a great team and like I said, it’s a pleasure to get to race for him.”

The win is Larson’s second World of Outlaws win of 2020 and 10th overall, tying him on the all-time wins list with Danny Smith and Joe Gaerte, who is the crew chief for Kyle Larson Racing.

While Schatz had to settle for second, the finish is his fifth top-five finish in a row.

“He just found a different line in (turns) one and two,” Schatz said. “I didn’t think it would stay that long, so I didn’t try it. You can’t be making any mistakes. But, if you’re going to make them, now is the time to do it. It was a real solid night.”

Gravel ended the night third and said he’s pleased with it considering Jason Johnson Racing brought out a new car for the event.

Carson Macedo, who drivers for Kyle Larson Racing, earned his second top-five of the season with a fourth-place finish.

Series points leader Brad Sweet had a rough night, finishing 12th – his first finish outside the top-10 this year. He wasn’t alone as Logan Schuchart had an engine fail in Qualifying and found himself having to use a provisional to start the Feature. He was able to charge from 25th to 13th, earning his the KSE Hard Charger award.

Sweet is now ahead of Schatz by eight points and Schuchart by 38.

The World of Outlaws NOS Energy Drink Sprint Car Series returns to Knoxville Raceway Saturday, June 13 for the final night of the Brownells Big Guns Bash. You can watch all of the action live on DIRTVision.