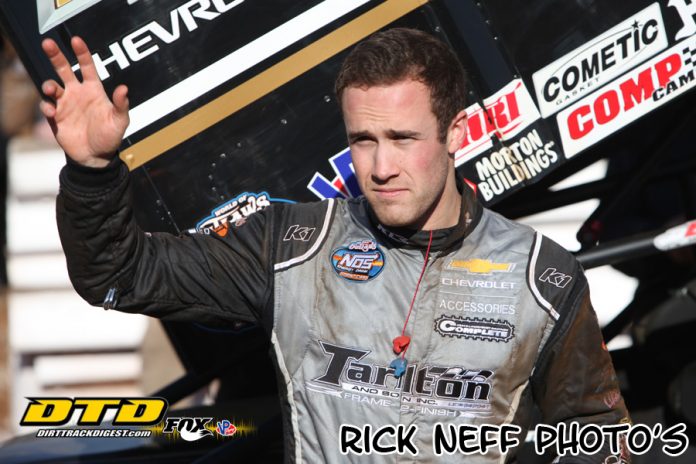 JACKSON, MN – Carson Macedo and his Kyle Larson team have found themselves on a hot streak just in time for the prestigious 42nd Annual AGCO Jackson Nationals at the Jackson Motorplex.

The Lemoore, CA driver and 2019 Rookie of the Year is coming off a run of four top-five finishes in a row – including his win at Tri-State Speedway last weekend – heading into the crown jewel event June 25-27, which will pay $30,000-to-win on Saturday. Macedo also currently sits fourth in points with the second most top-10 finishes this year with 12 – reigning champion Brad Sweet has 13.

He won the second of three days at the 4/10-mile Jackson Motorplex last year and earned a top-10 finish the other two days. Knowing he can perform well at the Minnesota track, Macedo said he’s excited to get back there, especially with the way his Tarlton & Son #2 is running.

“I think if we go back there with our base package from last year, we’ll have a lot of success,” Macedo said. “Our car was really strong there. I feel like I made good decisions that whole week. I’m really excited.”


His win last weekend at Tri-State Speedway was his sixth career World of Outlaws win and fourth on a quarter-mile track. While he’s proven he can excel on the bullrings, Macedo said he’s working to become more diverse in his sophomore year and be just as successful at any size track, like Jackson Motorplex.

When the 2020 World of Outlaws NOS Energy Drink Sprint Car Series began at Volusia Speedway Park in February, Macedo and his team were encouraged by the start to their second year together. He earned one top-five and three top-10 finishes with a new package they were trying.

They were even more encouraged when they won a track event at Williams Grove Speedway in March – a track Macedo normally struggled at.

Then, the world stopped. The COVID-19 pandemic put racing on hiatus for about two months.

When they were able to return to racing in May at Knoxville Raceway, the performance they started the year with wasn’t there. The new package they tried to build upon wasn’t working. Macedo acknowledged he also made mistakes he normally wouldn’t have made.

“I remember being at Knoxville (in May) and thinking, ‘Man, we gained about 100mph,’ because we hadn’t been racing because it feels so fast,” he said. “I feel like if you look back at the video, a lot of guys made mistakes that normally World of Outlaws guys don’t make. Yeah, I think I came back rusty. It showed middle part of some of the races. I made mistakes that I normally wouldn’t make and kind of get out raced. It feels good to get back in a swing of racing a lot. It keeps you a lot sharper.”

He finished 14th at Knoxville and then 25th at Federated Auto Parts Raceway at I-55 the next race. But since then, Macedo hasn’t finished outside the top-10. He’s currently on a streak of nine top-10 finishes in a row.

Once their new package was no longer working, Macedo said the team went back to its base package from last year and have been working overtime to improve.

“Overall, as a team, we’ve went out, we’ve tested,” he said. “We’ve worked really hard to get better. I think lately the past few weeks it’s been paying off. We’ve been able to string together some top-fives (and a win), kind of be in contention to do well.”

“I feel like my guys are working really hard. (Crew chief) Joe (Gaerte), (and crew members) Trey (Bowman) and Patrick (Dudzinski). They’ve been putting in extra hours during the week to go test and do other things that other guys aren’t doing so we can get a little bit of an edge and get better. I feel like it has been paying off. Like I said, the last few weeks we’ve had speed. Our cars have been a lot better and I’ve been making better decisions. I’m excited. I think there are good things to come and I feel like if we can keep on the path we’re on we’ll string some wins together.”

That winning streak could continue this weekend as he’ll take on the likes of reigning champion Brad Sweet and 10-time Series champion Donny Schatz – who together have won the pass three AGCO Jackson Nationals titles – during the three-day event at the Jackson Motorplex. Tickets for the event are available by clicking here.