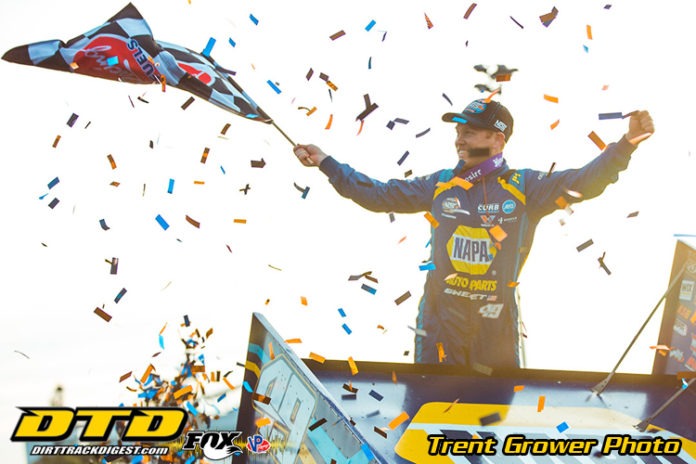 Sweet, the two-time and defending AGCO Jackson Nationals champion, won his fourth World of Outlaws NOS Energy Drink Sprint Car Series Feature at the 4/10-mile Jackson Motorplex before having to turn around and run another Feature later in the night.

“We were slow in qualifying and had to make up for it,” said Sweet, of Grass Valley CA. “Luckily we got the win.”

Thursday night’s program was halted by rain and pushed to Friday evening before the official second night of the AGCO Jackson Nationals kicked off.

When Feature went green, after a red flag on the initial start for Mark Dobmeier flipping in Turn 2, Sweet snuck to the outside of Austin McCarl and drove around him in Turns 3 and 4 to claim the lead on the first lap. From then on, it was “The Big Cat’s” show.

Sweet pulled away to about a straightaway lead over McCarl by the second lap of the race. He hit lap traffic on Lap 6, but the slower cars didn’t faze him. While McCarl was able to knock off a tenth of a second here and there when lap cars blocked the track in front of Sweet, the NAPA Auto Parts #49 gained those tenths back and more once he found clean air.

“I’ve felt comfortable here,” said Sweet, who’s won the last three 410 Sprint Car events at the track. “We have a good package here. Hats of to my guys.”

Shane Stewart had an impressive run going in his Feature debut in Guy Forbrook’s #5 car, running third for most of the race. But on Lap 13 he had an issue and had to pull off track. It was a big enough issue to end his entire night. That moved Matt Juhl, who won at Jackson Motorplex in a 360-c.i. Sprint Car the week before, into third.

Neither Juhl or McCarl had anything for Sweet in the closing laps. He pulled his Kasey Kasey Racing car into Victory Lane for the fifth time this year with the World of Outlaws.

“Hopefully we can have a good night overall and it will put us in a good spot on Saturday (for the Jackson Nationals championship $30,000-to-win finale),” Sweet said.

McCarl finished second and Juhl rounded out the podium – career best World of Outlaws runs for the two drivers.

“He (Sweet) got a good run there on the top and got by me,” McCarl said. “That’s why he’s a World of Outlaws champion. One of the best in the world right now.”

While Sweet takes home the trophy, Logan Schuchart has the early points lead for the Jackson Nationals with his fourth-place finish in the Feature and other strong performances throughout the format, such as his runner-up qualifying run. Parker Price-Miller is second and Sheldon Haudenschild is third. Sweet is currently 12th in points. He qualified 25th in round one, which put him behind in points.