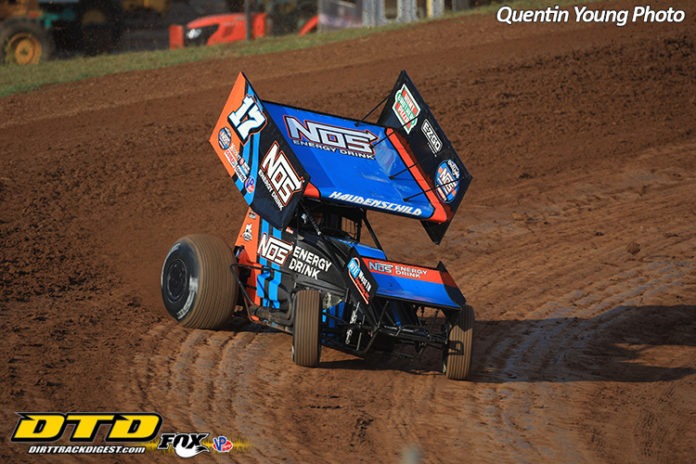 PEVELY, MO – The stamina and strength of the greatest Sprint Car drivers in the world will be put to the test this weekend at Federated Auto Parts Raceway at I-55 for the prestigious Ironman 55.

Drivers will compete in a doubleheader event at the fast 1/3-mile track, running 35 laps on Fri., Aug. 7 and then 55 laps on Sat., Aug. 8 – the longest World of Outlaws NOS Energy Drink Sprint Car Series event of the year.

With $28,000 on the line to win between the two nights and a special dumbbell trophy presented to the winner Saturday night, drivers will be pushing their cars and their bodies to the edge to claim the Ironman title.

HISTORIC HAUD: Sheldon Haudenschild, of Wooster, OH, enters the Ironman 55 weekend looking to hold on to the title he claimed with a historic win last year. He won his first Ironman by more than 10 seconds over 10-time Series champion Donny Schatz, lapped up to the top-five and led 45 of the 55 laps in the caution free event.

He was on track to pull off a similar feat at the 1/3-mile track in May by taking the lead early and running away with it, but a mistake in Turn 1 resulted in him flipping over the cushion. He and his Stenhouse Jr.-Marshall Racing team are poised to put their NOS Energy Drink #17 back in Victory Lane with their recent run of 18 top-10 finishes in a row in the last 19 events – including their win at Lincoln Speedway.

TOP CAT: Reigning champion Brad Sweet, of Grass Valley, CA, is the winningest driver on 1/3-mile tracks, so far, this year. He won at I-55 in May and swept the weekend at Beaver Dam Raceway. His brother-in-law Kyle Larson has the second most, having won at I-55 in May and his last race with the Series at Attica Raceway Park.

Both drivers were the only two to finish on the podium during the spring doubleheader event at I-55, as well.

Sweet reclaimed the points after the last race at Williams Grove Speedway, after a wild two weeks of rare issues for both he and Donny Schatz. He’s currently 18 points ahead of Schuchart and 26 points ahead of Schatz. So, while he and his NAPA Auto Parts Kasey Kahne Racing team hunt for their first Ironman title together, they’ll also be looking for two good points nights.

DETERMINED SCHATZ: After claiming the points lead for a week, 10-time Series champion Donny Schatz fell back to third in points when a mechanical issue took him out of the race during the Summer Nationals at Williams Grove. He and his Tony Stewart/Curb-Agajanian Racing team will be digging to rebound during the Ironman weekend.

Prior to the issue, they hadn’t finished worse than second in five of their last seven races – including getting their third win of the year at Lernerville Speedway.

Of all the accolades Schatz was acquired, the Ironman is one he’s still chasing after. He has two wins at the 1/3-mile track, though – the most recent coming in 2015. He finished seventh and eighth, respectively, at the speedway in May.

SHARK STRENGTH: Shark Racing has proven it has the strength and speed to go after another Ironman title this year. Logan Schuchart, of Hanover, PA – who has five wins already this season, including a win at the 1/3-mile Lake Ozark Speedway – won the Ironman in 2018. His teammate, and fellow Hanover, PA-native, Jacob Allen showed speed at the track in May, leading laps and earning his first top-five of the year there.

The two Drydene drivers are coming into the doubleheader weekend with the momentum of solid runs during the PA swing. Both finished on the podium at Lincoln Speedway, where Allen also led several laps. And they also finished inside the top-five at the Summer Nationals at Williams Grove.

DOUBLE DUTY GRAVEL: David Gravel, of Watertown, CT, will have a busy weekend ahead of him. He’ll make his NASCAR Truck Series debut Friday night and then make the trip to Pevely, MO on Saturday to go after his first Ironman title. Parker Price-Miller will fill in for him Friday night as Jason Johnson Racing is in the contention for the team championship – only 26 points back from the lead.

Gravel is the most recent winner in the Series, picking up his first Summer Nationals victory at Williams Grove a couple of weeks ago. A win at I-55 this weekend would be his second at the track – his first came in 2016. He has one win at a 1/3-mile track this year, as well, but he’ll look for big improvements from his May performances at I-55 where he finished sixth and 17th, respectively.

PITTMAN ON VICTORY HUNT: Of all the full-time drivers on the World of Outlaws tour, Daryn Pittman, of Owasso, OK, is the winningest driver at I-55 with three victories – the most recent coming in 2018.

Pittman and his Roth Motorsports team are still searching for their first win of 2020. A victory at I-55 could help set them on a path to many more.

SPEEDY STEWART: Shane Stewart, of Bixby, OK, found his footing in Bernie Stuebgen’s Indy Race Parts #71 at I-55 in May. He finished fourth and sixth, respectively, and then went on a run of five top-10 finishes in a row with the team. Eventually, their solid chemistry together resulted in a win Williams Grove last month.

Stewart will be chasing his second Ironman title this weekend. His first came in 2015 – also his sole victory at the track.

ABOUT THE TRACK
Federated Auto Parts Raceway at I-55 is a high-banked 1/3-mile track
Track Record – 9.995 sec. set by Kyle Larson on May 22, 2020
Online – FederatedAutoPartsRaceway.com