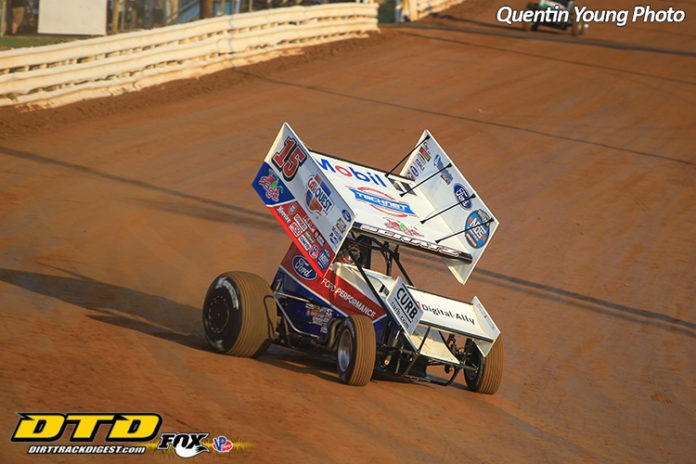 The Greatest Show on Dirt will make its 26th visit to the quarter-mile River Cities Speedway in Grand Forks, ND on Fri., Aug. 21 and its 32nd visit to 3/8-mile Red River Valley Speedway in West Fargo, ND.

With the big Knoxville weekend completed, the two North Dakota tracks will kick off the road to the championship with five drivers and six teams still separated by less than 100 points for the driver and team championships.

Key wins and points will be on the line this weekend, along with the $10,000 top prize each night.

If you can’t make it to the track, you can watch both races live on DIRTVision.

SCHATZ RETURNS HOME: Ten-time Series champion Donny Schatz, of Fargo, ND, is set to put on a show for his home crowd this weekend. The Tony Stewart/Curb-Agajanian Racing driver has been one of the most dominant drivers at both River Cities Speedway and Red River Valley Speedway.

He has 12 wins with the World of Outlaws at River Cities and three at Red River Valley. He won the last Series event at both tracks, as well.

After finishing outside the top-10 throughout the three-day event at Knoxville Raceway last week, Schatz will look to return to form with his CARQUEST #15 car. He could also move two steps closer to reaching a milestone 300 career wins this weekend, too – currently at 297 wins.

He earned two podium finishes during “The One and Only” at Knoxville and may pick up a couple more this weekend. Schuchart earned a win and third-place finish at River Cities last year. He also finished fifth at the last race at Red River Valley in 2018. He currently has five wins this year and the most top-10 finishes of all drivers with 28.

GRAVEL/JJR MAKING GAINS: With three top-five finishes in a row – including a win and runner-up finish – at Knoxville Raceway last week, David Gravel, of Watertown, CT, propelled Jason Johnson Racing to second in the team championship points – four points back from the lead.

LOOKING FOR LUCK: Reigning champion Brad Sweet, of Grass Valley, CA, and his Kasey Kahne Racing team are looking to get back into a rhythm after suffering their fourth DNF of the season at Knoxville Raceway. Their last 12 races have been a mixed bag of top-fives, top-10s and DNFs. Sweet has seven wins this year – tied with Kyle Larson for the most wins this season – with his last win coming at the beginning of July.

Pittman and his Roth Motorsports team are still searching for their first win of 2020 and a bit of consistency. Pittman was on a run of 11 top-10 finishes in a row from June to July but has struggled to get to the top-10 in his last five events. This weekend could be a boost the team needs.

MCFADDEN RESUMES TOUR: After being sidelined in Australia for five months, due to the COVID-19 pandemic, James McFadden, of Warrnombool, VIC, AU, made his highly anticipated return to the Karavan Trailers #9 car for Kasey Kahne Racing last weekend at Knoxville Raceway.

Now that he’s made it back to the United States, McFadden is here to stay and continue wheeling the #9 car. He nearly won at River Cities Speedway last year but ended the event second. And he’ll make his first start at Red River Valley Speedway this weekend.

DOBMEIER FUNDRAISER: A silent auction for Mark Dobmeier, of Grand Forks, ND, who was injured at Cedar Lake Speedway in July will be held Fri., Aug. 21 at River Cities Speedway. The auction is organized by the World of Outlaws Benevolent Fund Inc. and will take place on vendor row, outside the main gate.

And while Dobmeier is sidelined, three-time World of Outlaws champion Sammy Swindell, of Germantown, TN, will be behind the wheel of the Buffalo Wild Wings #13 car this weekend.