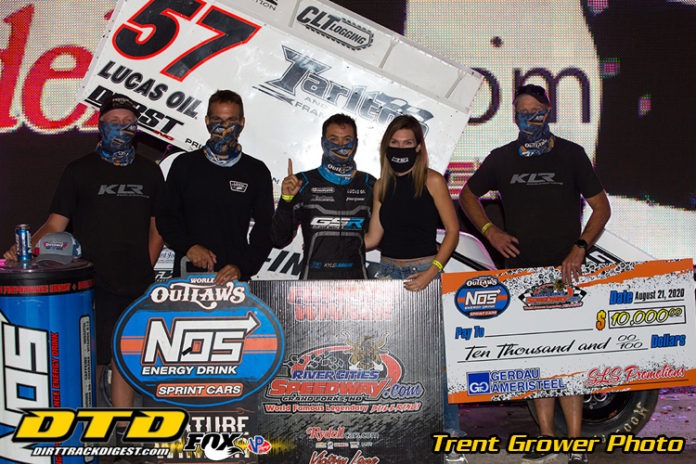 GRAND FORKS, ND — Kyle Larson was sideways in the Turn 4 grass with four laps to go as Logan Schuchart ran away with the lead at River Cities Speedway Friday night.

Yet, he still managed to turn an unpredictable situation into a characteristically canny conclusion.

The Elk Grove, CA driver rallied in three laps to catch and strong arm his way past the Shark Racing #1S to claim his eighth World of Outlaws NOS Energy Drink Sprint Car Series win in 2020 — making him the winningest driver, so far, this year in the Series.

“The Outlaws is as tough as it gets for Sprint Car racing throughout the world,” Larson said. “To come in here and be as strong as we have all year long and get a lot of wins, it’s been a lot of fun. We need to keep getting our stuff better, because everyone is chasing us and getting their stuff better each race.”

Friday’s event at the quarter-mile speedway was Larson’s debut at River Cities and his first time racing in North Dakota. He kicked it off my setting quick time in Qualifying and making his way into the DIRTVision Fast Pass Dash with a second-place run in his Drydene Heat Race behind David Gravel.


He drew the rear for the Dash but in typical Larson fashion, he seamlessly teleported his way from sixth to third on the opening lap of the Dash and ended up second. Gravel claimed the win — placing he and Larson on the front row for the 40-lap Feature.

Their battle around the bullring would be an extension of the war they waged for the win at Knoxville Raceway last weekend.

When the duo drag raced to Turn 1 at the start of the Feature, Larson darted ahead by ripping the top lane of the corner. Points leader Logan Schuchart followed in his tire tracks, stealing second from Gravel on the first lap, as well. The Silva Motorsports #57 did as it does every race, though, and pulled away from the field.

The end of the first 14 laps saw reigning champion Brad Sweet’s streak of bad luck continue. Wayne Johnson spun in Turn 4, causing cars to stack up. Sweet, who was fifth, jumped a tire of a slowed car in front of him and went head first into the Turn 4 wall. His Kasey Kahne Racing team was able to get his car repaired and send him back on track to make a charge from the rear. And he did. While Larson and Schuchart battled, Sweet made his way back to fifth by the end of the Feature.

Larson held a commanding lead over Schuchart for the majority of the race, but with heavy traffic in the final five laps Schuchart took advantage of the opportunity to strike. Locked on Larson’s bumper down the backstretch with four laps to go, Schuchart dove to the bottom in Turn 3. Larson also had the same idea. The two drivers made contact with Larson getting turned into the Turn 4 grass off Schuchart’s front bumper.

“I felt contact into (Turn) three,” Larson said. “I wasn’t sure if it was a lapper because I came across. But thank God I was able to keep it straight. I knew there wasn’t many laps left. Had to get up on the wheel there.”

Schuchart sped away while Larson added off-roading to his resume by steering his car straight through the grass and back on to the track without losing another spot.

The win appeared to be in Schuchart’s hand as he held about a half of a straight away lead on Larson coming to the white flag. However, Larson tested the limits of his machine each corner. He throw it into Turn 1 and found enough traction to cut a few car lengths off Schuchart’s lead.

On their exit of Turn 2, Schuchart couldn’t put the power down quick enough and allowed Larson to close even further. At Turn 3, Schuchart entered through the middle, while Larson went as high as he could go. Their cars met at Turn 4, but while Schuchart was sliding up, Larson turned down underneath him and rocketed by to steal the win.

“I knew he was going to have to make a decision going into (Turn) three and hoped he wasn’t going to run the cushion,” Larson said. “I knew that would be my only shot. I was just able to time the run good and clear him off of (Turn) four here.

“That was definitely an exciting one. It’s been fun to win a lot. I hope we keep it going.”

While Schuchart had to settle for second, he was still able to extend his points lead over Sweet – now 24 points ahead of the defending champion.

“It is just tough when you’re behind a guy like that,” Schuchart, of Hanover, PA, said about racing with Larson. “Kyle doesn’t make any mistakes. He’s tough. I had one shot right there. I felt like I could get through (Turns) one and two a little bit better at times and catch him.

“I felt like I had one shot there. I was getting close and had a really good run into (Turn) three when he cut to the bottom and I was trying to back off and go to the outside of him and caught his back bumper. I’m not trying to hit him, and I know he didn’t the other night at Knoxville. That’s racing and we’re racing hard. He just drove a little bit better than I did and got the job done.”

Ten-time Series champion Donny Schatz, of Fargo, ND, put on a show for his home state crowd, battling with Gravel and James McFadden for third throughout the Feature. He was able to come out on top of that battle, rounding out the podium, and rebound from a rough weekend in Knoxville where he was unable to score a top-10 finish.

“We didn’t have the right combination here tonight,” Schatz said. “Just the way it goes. When you get behind the eight ball a little bit you get a long way behind. My guys are doing an incredible job with what we have to work with and will have to keep digging.”