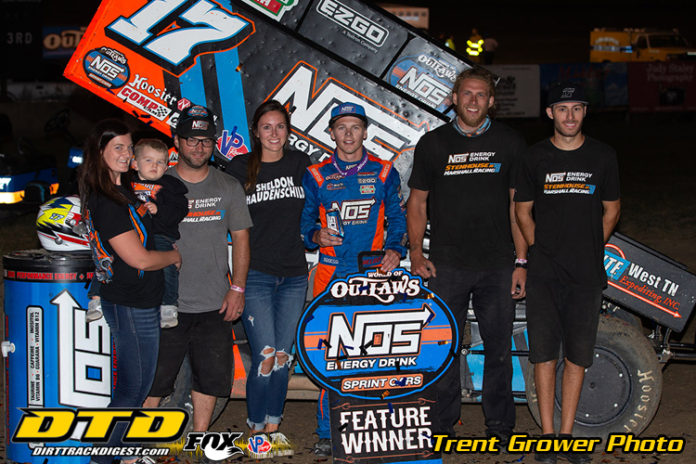 Both were on a mission to win. However, Sweet, the reigning champion, hadn’t won since the beginning of July. Haudenschild’s last victory was earlier this month.

That didn’t classify Haudenschild as being less determined or motivated, though. He proved that by keeping the NAPA Auto Parts #49 in his target for those final seven laps. And watched it fade to him.

With five to go, Sweet’s lead was down to about a second.

With three to go, nearing half of a second.

With one to go, Haudenschild was no longer polite with his throttle. He shocked Sweet and everyone watching by driving around the outside of Sweet in Turn 4 and then edged him by 0.118 seconds at the finish line to claim the win.

“That last lap, I just let it eat,” Haudenschild said about his show stopping performance in his first appearance at U.S. 36. “I didn’t know if we were going to crash coming to the checkered. I didn’t even know if it was the checkered or not honestly.”

The win is his third of the 2020 World of Outlaws NOS Energy Drink Sprint Car season and 10th of his Series career – tying him with Danny Smith and Joe Gaerte for 42nd on the all-time wins list.

When the field of 24 cars commenced their duel for the win in the 35-lap Feature, Sweet bolted ahead to the early lead with points leader Logan Schuchart close behind him. Haudenschild maneuvered his way from fifth to third on the first lap, but David Gravel grab the final podium spot back five laps later.

Heavy traffic became an obstacle for the leaders within the first six laps and cost Sweet the lead for about 20 seconds. Austin McCarl spun in Turn 2 in front of the leaders, blocking Sweet’s favored low line. That allowed Schuchart to throttle around the outside of Sweet and take the lead down the backstretch. The Shark Racing driver’s moment of glory ended by the time they reach Turn 4 again as Sweet powered back by the Drydene #1S for the lead.

Once Schuchart lost the lead, he got sucked into Gravel and Haudenschild’s duel, creating a three-car battle for second. The trio went three wide in Turn 1 and resulted in Schuchart holding second off the corner and Haudenschild moving back ahead of Gravel for third.

The next corner, Haudenschild and Schuchart took Sweet three wide for the lead on the exit of the Turn 4. Sweet was able to maintain the lead with the run he got off the high side of the corner and Haudenschild edged Schuchart for second at the line before the caution came out.

Haudenschild took advantage of his opportunity to line up alongside Sweet on the restart. Using the provided high line to his advantage, he powered alongside Sweet in Turn 4 and snuck ahead of him down the front stretch to take the lead for the first time – a move that foreshadowed his future.

With 18 laps to go, Haudenschild’s hopes for another victory looked to be tarnished when he bounced off the cushion in Turn 2 and allowed Sweet an easy pass for the top spot. Sweet pulled away to a straightaway lead and Schuchart was back on Haudenschild’s bumper.

Keeping his poise, Haudenschild was able to hold Schuchart behind him and get back into a rhythm of clicking off fast laps.

Heavy traffic became an issue again for Sweet in the closing circuits. He preferred the bottom lane, making his trek around the slower cars more difficult as many of them ran the same line. Haudenschild’s lane was a little clearer around the top, allowing him to shave off tenths of a second from Sweet’s lead every lap.

With seven laps to go, he was 2.5 seconds behind.

With three to go, down to about half of a second.

With one to go, the NOS Energy Drink #17 brought the Missouri crowd to their feet and kept the Series’ train of spectacular finishes rolling.

“It was tough,” Haudenschild said about running down Sweet. “I made one bobble over there (in Turn 2) and let Brad capitalize and get by me and ran away. We got to lappers there and they were running top and bottom pretty good pace. Kind of held Brad up there. And I got held up for a few laps. I really didn’t get close there until the white or two to go and just had to send it off (Turn) four.”

Sweet’s runner-up finish is his second in a row and his 22nd podium finish of the season.

“Hopefully I can get on the good side of one of these,” Sweet said. “Hopefully the fans enjoyed it. The NAPA Auto Parts car was good. I really felt like I drove a good race. Just got to those lap cars at the end and, obviously, Sheldon just… I had no idea we were coming to the checkered. But no excuses. You have to run every lap. I was full bore. Just hoping I had a good enough lead there.”

Sweet is now six points behind Schuchart, who finished third, for the championship points lead. And by rounding out the podium, Schuchart was able to break the tie for the team points lead with David Gravel finishing fourth – Shark Racing leads Jason Johnson Racing by two points for the team championship.

“You got to be consistent,” Schuchart said about going after the championship. “I would’ve liked to have raced for the win or have been up there putting on a show. But I felt like some restarts didn’t go our way. It’s a great run. We’re here on the podium. Another good run for this Drydene Performance Products race car.”

Haudenschild’s win helped elevate him in the Series points, as well. He is now up to fourth in points – 86 points behind Schuchart. And he’s no stranger to making late race charges to steal the win.

The World of Outlaws NOS Energy Drink Sprint Car Series returns to I-80 Speedway in Greenwood, NE for the first time in four years on Sun., Aug. 30. Get tickets by clicking here.