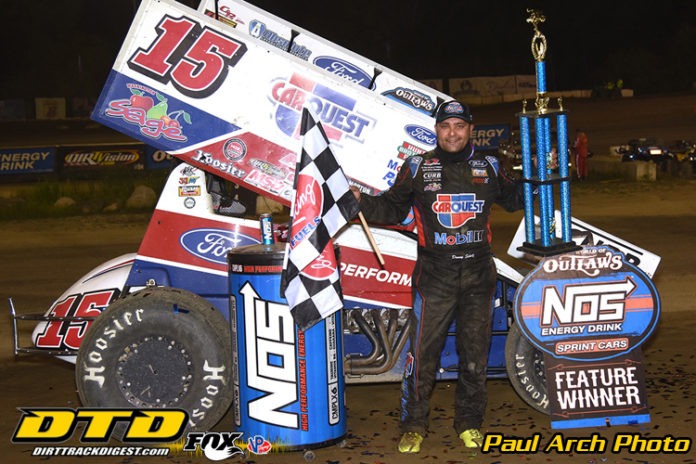 The last time he went on a winless streak that long was in 2012 when he didn’t win for 33 straight races throughout the summer months.

He put a stop to the idea of going that long without a win again Thursday night at Plymouth Speedway. With one of the best performances he’s had in two months, and a bit of luck, Schatz parked his CARQUEST Auto Parts #15 in Victory Lane at the Indiana track for the first time in his career.

“These (Tony Stewart/Curb-Agajanian Racing) guys kept digging,” said Schatz, of Fargo, ND. “We know the road to the top. We know the road to the bottom. These guys just keep working. They’ve tried to get a handle on the horsepower (of the Ford FPS 410 engine). This is a different combination for tonight and obviously everything that’s happen shows it’s going in the right direction. We’re happy about that.”

Schatz teased the speed of his TSR car around the 3/8-mile track in August by setting a new track record. However, he had to wait until Thursday night to unleash the full potential of his ride due to rain postponing the August event.

While he wasn’t able to match his track record, qualifying sixth, Schatz did outrun NASCAR-star Christopher Bell in their Drydene Heat Race to claim his ninth Heat win of the season. He then finished second in the DIRTVision Fast Pass Dash, behind winner Gio Scelzi, to lineup on the outside pole for the 35-lap Feature.

Sheldon Haudenschild spoiled Schatz and Scelzi’s hopes of leading the first lap of the Feature, though. Hooked around the bottom, Haudenschild passed Schatz for second in the first corner and then snuck by Scelzi for the lead the next. His moment of glory lasted for three more turns before Scelzi pulled the trigger on a slide job entered Turn 3 and cleared Haudenschild for the lead before the exit of the corner.

For the next half of the race, Scelzi held Haudenschild at about a car length’s distance back, while Haudenschild did the same to Schatz. Lap traffic changed that. The slower car of Brinton Marvel blocked Scelzi’s line around the bottom for two laps, allowing Haudenschild to close in and plan his attack.

With 17 laps to go, Marvel nearly chopped Scelzi’s nose on the exit of Turn 4. Scelzi had to go from throttle to brake, while Haudenschild was all throttle off the corner and rocketed by the Logan Contractors Supply #18 car to take the lead.

Schatz worked his way by Scelzi for second a lap later. Perfect timing.

After holding the runner-up spot for a lap, Haudenschild handed Schatz the lead. The NOS Energy Drink #17 suffered a broken shock with 15 laps to go. Haudenschild’s time in the work area for repairs expired before the field resumed racing, forcing him to remain there and eventually end the night 23rd.

On the final restart of the night, Schatz powered ahead of the field to lead his first laps of Feature. Reigning champion and current points leader Brad Sweet slid by Scelzi for second on the restart but didn’t have the speed to challenge Schatz.

“Donny was definitely a little better there,” said Sweet, of Grass Valley, CA. “He could get through the lap cars. We caught the first lap car and couldn’t pass them. I just need to be a little better. Obviously, we missed the setup. I think we were better in the Heat Race and made our car worse in the Dash. But they reworked the track. We made some not so great decisions. But we win as a team. Lose as a team.”

Looking like the dominant Schatz of races past, the multi-time champion cruised to a two-second victory over Sweet.

“It feels good to finally get a win here,” Schatz said with a chuckle. “I can’t remember the last time. It’s been a while.”

The victory is Schatz’s fourth of the year and 298th of his career.

Kasey Kahne Racing ended the night with two podium finishes. Sweet finished second and James McFadden finished third in the Karavan #9 car. Jacob Allen nearly edged McFadden for third at the line but had to settle for fourth. Behind him, Tyler Courtney had an impressive fifth-place run – his first top-five finish with the World of Outlaws.

Sweet was able to extend his points lead with 11 races remaining. He entered the night with an eight-point lead over Logan Schuchart and, with Schuchart finishing eighth, ended it 20-points ahead.

Schatz’s win helped him cut his points deficit to 88 points behind Sweet.

For the time being, there’s one number Schatz is most happy to about. Zero. His new winless streak. 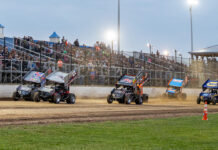 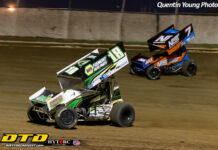