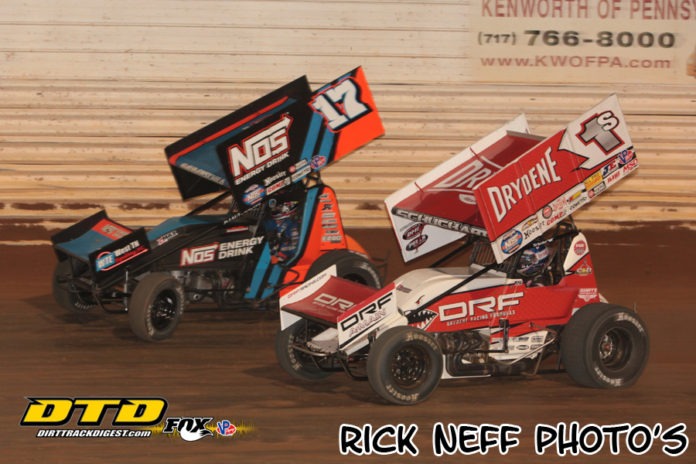 KANSAS CITY, KS — Pack your bags; we’re going to the lakes this weekend.


JJR SHAKE UP: Jason Johnson Racing is in the middle of a tight battle for the team championship – currently 12 points back from the lead – but the team will be without its primary driver this weekend. David Gravel will miss both races to make another NASCAR Truck Series start.

Replacing Gravel will be Shane Stewart, of Bixby, OK, driving the red throwback #41. And with the Jason Johnson Classic being this weekend, Parker Price-Miller, of Kokomo, IN, who previously filled in for Gravel, will drive a #141 car for JJR, using the team’s traditional black and white livery. Stewart and Price-Miller will compete at Lakeside and Lake Ozark, with Stewart collecting points for JJR.

SCHATZ’S SHOT: Ten-time Series champion Donny Schatz, of Fargo, ND, has been chipping away at his points deficit to championship leader Brad Sweet each week. He enters the doubleheader weekend sitting 68 points behind Sweet in third. This weekend could also be his best shot of making a big gain to put himself closer in contention to compete for his 11th Series title.

Schatz brought Ford its first World of Outlaws victory in 21 years at Lakeside Speedway last year with the FPS 410 engine and he won the last race at Lake Ozark Speedway this year. A victory this weekend would also be his 300th career World of Outlaws win. He’ll also have a teammate for the second week in a row with Tim Kaeding driving the Tony Stewart/Curb-Agajanian Racing #14 car.

LAKE SHARK: Logan Schuchart, of Hanover, PA, and his Shark Racing team are poised to get back into a consistent rhythm and go after their first World of Outlaws title. They enter the weekend coming off a strong fourth-place run at Port Royal Speedway, which helped him cut eight points off Sweet’s lead over him.

He’ll look to do that again this weekend at a couple of tracks he’s also found success at. While Schuchart has yet to win at Lakeside, he finished second at the track last year. And earlier this year he picked up his first win at Lake Ozark Speedway.

BROWN EYES HOME SUCCESS: Brian Brown, of Grain Valley, MO, who claimed his fourth Knoxville Raceway track championship this year, will hope to find some luck in his home territory this weekend with the World of Outlaws. He’s been unable to secure at top-15 finish in his last seven starts with the Series.

Lakeside could be a turning point for him. He led the first 12 laps of the Feature at the track last year before being passed by Donny Schatz for the win and having to settle for a fourth-place finish. Brown also won a Series race at the track in 2017. He attempted to make both Series races at Lake Ozark in May but was unable to make either.

AYRTON SHOWING GROWTH: One driver to keep an eye on this weekend, and for possibly years to come, is Ayrton Gennetten, of Gravois Mills, MO. The 21-year-old has been solid in his first seven Feature starts with the Series this year, collecting four top-15 finishes in his #3 car. He was in contention for a top-five at the Terre Haute Action Track, even challenging Donny Schatz to claim the spot, before getting involved in an accident.

He finished 16th and 13th, respectively, at Lake Ozark in May. This weekend will be his first Series appearance at Lakeside.