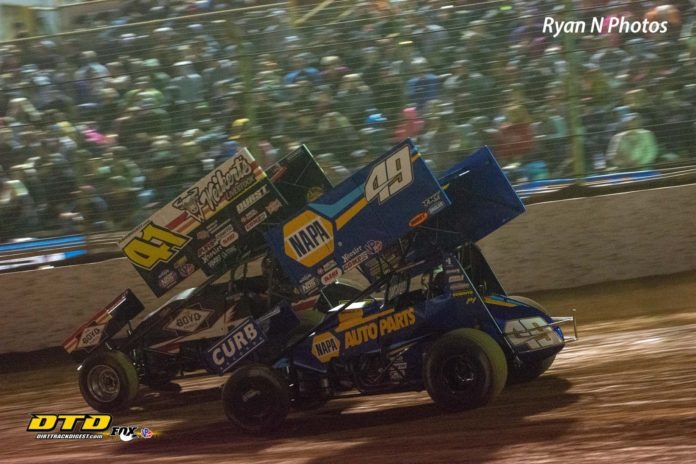 The World of Outlaws Last Call will conclude the wild and eventful 2020 season with another exciting championship battle and two Feature events, each paying $12,000 to the winner.

If you can’t make it to the track, you can watch both nights live on DIRTVision.

TITLE HUNT NEARS END: For the second year in a row, reigning champion Brad Sweet, of Grass Valley, CA, enters the final two races at The Dirt Track with the championship lead. However, this time, he has two championship battles to worry about and three drivers to contend with.

In the driver title hunt, Logan Schuchart, of Hanover, PA, is second – 46 points behind Sweet – and 10-time Series champion Donny Schatz, of Fargo, ND, is third – 68 points back.

Then, for the team championship, Sweet’s Kasey Kahne Racing team is 30 points ahead of Jason Johnson Racing, who will have David Gravel, of Watertown, CT, behind the wheel of the #41 car for the final two races. Gravel swept the two races at Charlotte last year.

A championship win this year would hold historical significance to each driver and team. For Sweet, it would be his second consecutive championship and would make him the sixth driver to have multiple World of Outlaws Sprint Car championships. For Schatz, this would be his 11th title and if he could grab a win this weekend, he would hit a career milestone of 300 Series wins.

If Logan Schuchart and his Shark Racing team can score the 2020 title, it would be their first. The same for Jason Johnson Racing.

LARSON/SCHATZ DOUBLING DOWN: Kyle Larson, of Elk Grove, CA, and Donny Schatz will get a couple extra days of seat time around the 4/10-mile track on Wednesday and Thursday by competing with the World of Outlaws Morton Buildings Late Models.

Schatz has made three starts with the World of Outlaws Late Models this year, finishing inside the top-10 in each event. This week will be Larson’s debut with The Most Powerful Late Models on the Planet.

They’ll then turn their attention back to Sprint Car racing on Friday and Saturday. Larson has never won at The Dirt Track, but seven of his 12 victories this season came at tracks he had never won at before with the World of Outlaws. Schatz has 13 victories at the Charlotte track.

LAST CALL FOR PITTMAN/KLR: When the checkered flag waves Saturday night, it will mark the conclusion of two eras. Daryn Pittman, of Owasso, OK, will hang up his helmet as a full-time driver and Kyle Larson Racing will close at the conclusion of the season.

In 17 full-time seasons with the World of Outlaws, Pittman claimed the 2013 championship and picked up 86 victories. Two of them came at The Dirt Track at Charlotte – most recently in 2014.

Since joining the World of Outlaws in 2014, Kyle Larson Racing earned 33 wins with Shane Stewart and Carson Macedo, including the 2015 Kings Royal with Stewart. The team will be on the hunt for their first win at The Dirt Track this weekend.

HOT STREAK HAUD: Sheldon Haudenschild, of Wooster, OH, has had a career season this year.

Entering the season finale weekend, Haudenschild sits fourth in points with seven wins. Previously, he hadn’t finished better than seventh in points in his past three seasons and collected seven wins in total in that time.

He won the most recent event at Kokomo Speedway and will look to end the season strong with his first Charlotte Dirt Track win.

RING THE BELL: NASCAR-star Christopher Bell, of Norman, OK, will join the World of Outlaws Sprint Cars this weekend for the Last Call in his self-owned #21X car.

Bell has two starts with the Series this year – finishing seventh at Plymouth Speedway and 13th at Lakeside Speedway. This weekend will be his debut at The Dirt Track with the World of Outlaws.