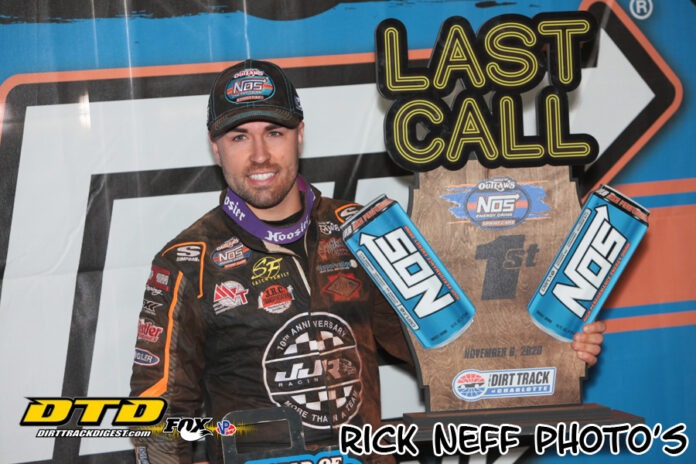 CONCORD, NC — David Gravel and Brad Sweet each claimed glory Friday night at The Dirt Track at Charlotte before they go to war on Saturday.

However, at the end of the night, the two shared a common desire: They’re both focused on winning the team championship for their teams. Sweet’s Kasey Kahne Racing team leads Gravel’s Jason Johnson Racing team by 22 points, heading into the final race of the 2020 season on Saturday.

“I just don’t feel like the job is fully completed,” said Sweet, of Grass Valley, CA. “I think the team championship is just as important to our guys, to me, to (team owner) Kasey (Kahne). The job is half done right now.

“Obviously, for me, personally, I know my name is going to be in those record books. Being a two-time champion is something that is really special to me. It puts me up there with some really great guys. I’m excited, but we still have to get that team championship for Kasey and the guys. If we’re able to do that, I think it will show that we were able to overcome a lot of adversity this year.”

During Gravel’s victory speech, the team title was the first thing on his mind, even as he plans to leave Jason Johnson Racing for Big Game Motorsports next year.

“What did he (Sweet) run fourth or something like that?” Gravel asked in Victory Lane. “So, we gained [eight] points on him. So, we’re [22] points back. Got to beat him by 10 positions tomorrow. That’s going to be hard to do. All we can do is win these races and see where we end up.”

If Gravel wins the final night of the Last Call, he’ll need Sweet to finished 11th in order to secure the team champion. The two teams would tie in points, but Jason Johnson Racing would then have nine wins versus Kasey Kahne Racing’s eight. With positions second and on paying two points between them, versus the four-point difference from first to second, Gravel would need to beat Sweet by 11 spots if he doesn’t win.

The Watertown, CT driver proved that he and JJR came to Charlotte with the intent of leaving with a title. He dominated the night by setting Quick Time, winning his Drydene Heat Race, finishing second in the DIRTVision Fast Pass Dash and then cleaning house in the Feature.

He and polesitter Carson Macedo raced side by side for the first lap, Gravel high and Macedo low, but the high line prevailed for Gravel, helping him to rocketed ahead of the Kyle Larson Racing #2 car.

Five cautions slowed Gravel’s quest for the trophy throughout the night. However, Macedo, and eventually Sheldon Haudenschild, had nothing for Gravel on the restarts from the runner-up spot. They’d close on Gravel in traffic, but he put time behind them once he got into a rhythm.

Gravel piloted the Mesilla Valley Transportation #41 car through tough track conditions and lap traffic to win by more than three seconds over Haudenschild.

“You couldn’t see the cushion going into (turn) three,” Gravel said. “It was really, really tough. So, I was kind of a little bit conservative. I’m sure whoever ran second got close there at one point. I went to the top and probably put on a little bit of a gap.

“Happy to get another win here. That’s three in a row here at this racetrack for us. Hopefully we can sweep it again. It would be a really good accomplishment and we can end this year off with a bang.”

Entering the night, Sweet had a 46-point lead over Logan Schuchart. To clinch his second consecutive World of Outlaws title, he had to finish one spot ahead of Schuchart. Sweet finished fourth and Schuchart finished sixth. As long as Sweet shows up to race on Saturday, the driver championship is officially his.

“I really wanted to lock the driver title up tonight,” Sweet said. “I knew that was our best shot to do it tonight, to beat Logan, and just come into it with a clear slate tomorrow and go after that team championship.”

Schuchart put on a valiant effort to try and keep his championship hopes alive with a charge from 16th to sixth, which earned him the KSE Hard Charger Award. And while he missed out on his first championship, he didn’t hang his head after the race.

“I would just like to end this year with a win,” said Schuchart, of Hanover, PA. “You know, finish out on top. You know, whatever happens other than that, some of it is not controllable for us but either way this Drydene team has worked really hard this year and has gained a lot from what we’ve been in years past. If we can continue to get better, we’ll be where we want to be in years to come.”

His points battle for the year isn’t over, yet, though. While he may not be competing for the championship, he’ll still need to fend off 10-time Series champion Donny Schatz to hold on to the runner-up spot in points. With Schatz finishing third, the Fargo, ND driver is now 12 points back from Schuchart. Schatz has finished first or second in points for the last 14 years.

The World of Outlaws 2020 season finale at The Dirt Track will see a championship battle come down to the last lap for the second year in a row. Gravel won the battle Friday night. Now, he’ll go to war with Sweet on Saturday.