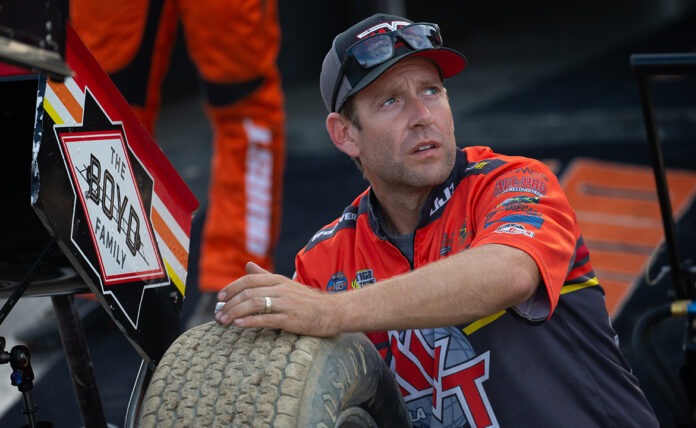 Serving as the crew chief for two cars, owning one of them, working with three drivers and winning with all three this year earned him his second World of Outlaws NOS Energy Drink Sprint Car Crew Chief of the Year Award – his first came in 2016 while working with Jason Johnson.

“It did get really busy for all of us to manage both teams, but it was a lot of fun,” said Dietz, who was crew chief for Jason Johnson Racing’s #41 car and his own Dietz Motorsports #14 car. “I really enjoyed it. I like new challenges and that was certainly one of them. It was a lot of fun for me.”

Next year, he’ll face a new challenge that he’s dreamed of. He and his wife, Brooke, have taken co-ownership of Jason Johnson Racing, while Bobbi Johnson takes a step back to spend more time home with her son Jaxx. Dietz will remain crew chief of the #41 car, which will run full-time with Carson Macedo.

“I’m very excited for it,” Dietz said. “It’s been a goal of mine, a dream of mine, to own a Sprint Car team one day. I never really anticipated it to be this big; to own a World of Outlaws team. It is certainly an honor. Two years ago, we were really uncertain of the direction of JJR, whether it would be a one-year deal, multi-year deal, we were just kind of taking it one year at a time and doing what was right for everyone.

“Obviously, it takes a lot of sponsorship to make it happen. If you can’t put all of those pieces together, it is impossible to go out and keep it going on a full-time basis. That was really tough for us. Obviously, with Bobbi, and with Jaxx in school now, we knew there was going to come a day when she couldn’t travel as much and want to scale back and be home and be a mom. And Jaxx is at that age now where he’s getting more involved in sports. It’s really important for her to be here (in Missouri) and be involved in all of that stuff.”

Dietz will be responsible for directing all the daily racing operations, strategy and sponsorship partner relations at JJR. Johnson will focus on operating the merchandise side of the business.

Running Dietz Motorsports this year and previous lessons learned from his late-cousin, Jason Johnson, have helped prepare Dietz for his new leadership role at JJR.

“I’ve learned a lot from the marketing side, dealing with sponsors, balancing a checkbook and making sure we have all of the parts needed to go out and be competitive,” Dietz said. “From that standpoint, it has taught me a lot of new things. I was involved with Jason and Jason Johnson Racing in previous years. He did teach me a lot of things and shared a lot of information. So, when I went into it, I wasn’t blindsided. I kind of knew a little bit about the business and understood the business. Certainly, a challenge to go out and do it on my own.”

He proved this mastery of juggling many items at a time without fear this year. Before the COVID-19 pandemic rocked the racing world, Dietz had planned on only running his Dietz Motorsports team on a part-time basis. But after a two-month break, he decided to run the team every weekend, doubling his crew chief responsibilities for about all 54 events.

That still resulted in Dietz getting his first win as a car owner with Parker Price-Miller at 34 Raceway, picking up seven wins with David Gravel driving the JJR #41 car, one win with Shane Stewart driving for JJR and running for the team championship with JJR before settling for a runner-up finish.

A notebook helped keep his changes and ideas organized, and his crew on both teams never missed a beat, but Dietz admitted 2020 was “pretty crazy to be honest.”

“The biggest thing was just keeping up with both cars,” Dietz said. “I guess just the work load itself in a timely manner. On an average night, it wasn’t that bad.  There were certain situations throughout the year, I know Dodge City, Kansas (Dodge City Raceway Park) is one that sticks out where the show was rushed a little quicker than normal. There was no [Last Chance Showdown]. That night was a little hectic. It made it tough to keep up with both cars and make the changes we needed to make with both of them and make them better for the Feature.”

One of the easiest parts of the challenge was meshing with each driver’s personality, he said. Dietz already had a full year under his belt with David Gravel – who started driving for JJR in 2019 – and was able to work well with Price-Miller and Shane Stewart – who won in his debut driving the JJR #41.

“Overall, I felt like it went really smoothly,” Dietz said. “As far as working with drivers, I felt like that worked out really well. David and I already had a system down where he would come in and give me his feedback and I could make adjustments fairly quickly. For that to remain the same and bring on the challenge of working with a second driver with Parker, that kind of made it tricky. But Parker did a job good. I really enjoyed working with him. Excellent driver. Gave great feedback. It wasn’t so much the personalities or the feedback from drivers that made it tricky. It was more of a time issue, trying to make sure we had everything done for when that eight-minute horn blew.”

Next year, he’ll reunite with 2019 World of Outlaws Kevin Gobrecht Rookie of the Year winner Carson Macedo. The duo won in their debut together during the second night of the 2018 360 Knoxville Nationals. Macedo, of Lemoore, CA, ran six World of Outlaws events for JJR that year, filling in for Jason Johnson who died earlier in the year. His best finish with the team was a fourth-place run at Eldora Speedway.

“I’m lucky to be able to land on my feet with Phil and Bobbi and the whole JJR team,” said Macedo, who lost his ride with Kyle Larson Racing, which closed at the end of the season. “I think they’re a very well put together organization. They’ve worked really hard over time to build a really good package during the few years they’ve been on the Outlaw tour. I’m excited to be a part of another good opportunity.”

To Dietz, Macedo’s driving style is like Johnson’s, which made it easier for him to watch the car and have a good idea of what needed to be changed to make it better. He said he’s excited to work with Macedo again and believes that JJR can carry the moment from this year into 2021 and be a championship-contending team.

“What’s nice, both of my (crew) guys, Clyde and Nate, they committed to staying on next season, so I think that’s going to make this go a lot smoother during the offseason, in terms of building cars and getting everything prepared,” Dietz said. “On top of that, we’re bringing in a driver like Carson Macedo, who already knows what to expect from me and I know what to expect from him. I feel like we’re going to jell really quickly. We’re going to keep working away, working hard at it. I feel like the key to success is preparation and I feel very confident with everything we have going on and for next season. I feel like we’re going to roll into the first race and probably be more prepared than we have been in previous years, so I’m really excited for that.”

(In PART II, we’ll explore what Carson Macedo learned during his time driving for Kyle Larson and what his expectations are with JJR for 2021.)

The team’s first race of the 2021 season will be at Volusia Speedway Park during the 50th DIRTcar Nationals. For tickets, click here.