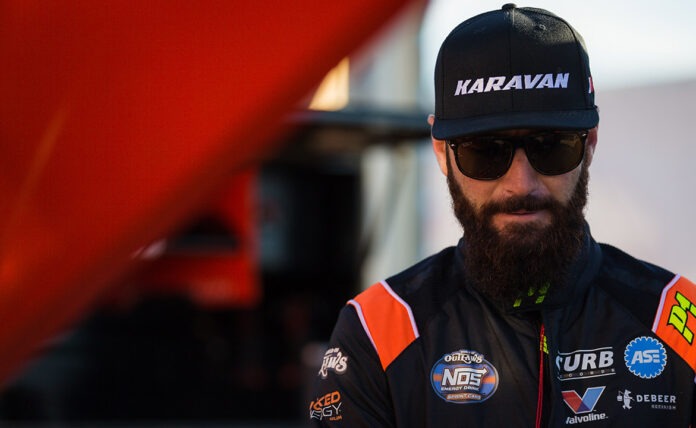 The five-time Australian World Series Sprintcars champion, of Warrnambool, VIC, Australia, will look to bring his Down Under dominance to the United States, as he competes in his first full-time season with the Series.

“Ah, mate, I’m really excited about this opportunity to run with the Outlaws full-time,” McFadden said. “I’m very grateful to Kasey (Kahne) for putting me in the Karavan #9 car and for giving me this chance. We’ve had great success already and I think we can have a competitive year.”

He’s already proven his potential in the states, claiming two World of Outlaws victories – his first at Williams Grove Speedway in 2017 and his most recent at Lake Ozark Speedway with Kasey Kahne Racing last year. McFadden has run part-time with the World of Outlaws since 2012 – the last two years in KKR’s #9 machine. In that time, he’s also claimed the 2019 360 Knoxville Nationals.

Kahne then took the #9 off the road full-time and ran it himself on a limited schedule in the early half of 2019. When he decided to step out of the seat, his first choice to fill it was McFadden.

“We’d always known James and he raced for my cousin Willie for a little bit,” Kahne said. “We had a friendship there and I had always been a fan of his driving and the things he did on the racetrack. And who he is. He’s a good guy. He fits in really well with our group. We just want to race together. We’ve won a lot of races together and enjoyed that. But I think the Outlaws is where it’s at with Sprint Cars and we want to give James a shot on the full Outlaw tour.”

“I personally, have always enjoyed having two cars out there,” Kahne said. “We haven’t had that the last couple of years since I got out of NASCAR. We want to have that again now.”

Making a two-car team succeed takes having the right people, Kahne said. The drivers need to work well together and the teams need to do the same. From what he’s seen the past two years with the way two-time defending champion Brad Sweet and McFadden work together and the way crew chiefs Eric Prutzman – with the #49 car – and Justin Adams – with the #9 car – work together, he’s confident he has the right people in place.

“When you have the right guys working on the cars, the right drivers that can race each other the right way and work together off the track, then, yeah, you can get help from each other,” Kahne said. “When you have one guy that is a little off on that stuff, then it doesn’t benefit you a whole lot. With the drivers we have right now, our group works well together.”

Due to extenuating circumstances that are keeping McFadden in Australia, he’ll miss the season-opening events at Volusia Speedway Park during the 50th DIRTcar Nationals and possibly a couple of races after. Until he’s able to make it over to the states, Kahne will drive the Karavan #9 car. Due to the circumstances, McFadden will get show-up points for the races he misses.

When the Aussie makes his continental leap, he’ll become the 16th member of the elite class of drivers for the 2021 season and join a stout Rookie of the Year contending group – including Aaron Reutzel, Brock Zearfoss and Parker Price-Miller.

Until then, Kahne will enjoy some seat time and try to give the #9 team a good start in the team points. He has one win at Volusia – in 2002 with the All Star Circuit of Champions – and made his last start at the track with the Series in 2019. Last year, McFadden brought the #9 team to a runner-up finish in the Big Gator championship.