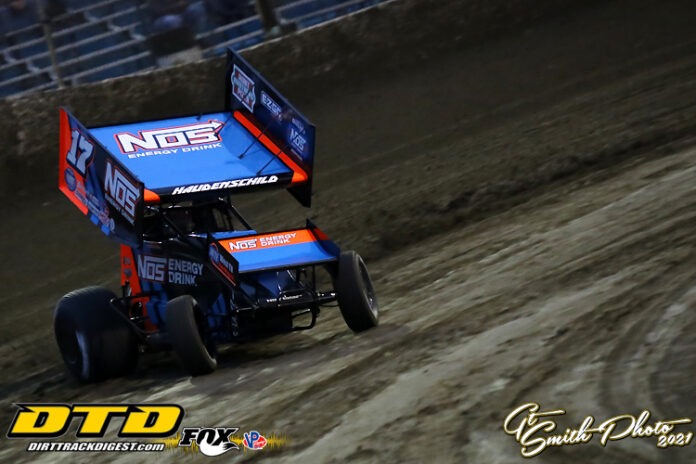 A packed pit area, a massive crowd, and some spectacular on-track action was the perfect recipe to end Mississippi’s decade-long absence from The Greatest Show on Dirt.

In the end, Sheldon Haudenschild made it five different winners in as many races on tour this year, stealing a late-race thriller away from the predominant Logan Schuchart. A mixture of lap traffic, track conditions, and Lil Haud’s patience came together to send the NOS Energy Drink #17 to victory lane in Columbus, MS; giving car owner Ricky Stenhouse Jr. of Olive Branch, MS a win on his home turf for the first time as a World of Outlaws owner.

Friday’s victory marked the 15th of Haudenschild’s young career, tying him with fellow full-timer Jason Sides for 34th on the all-time wins list.

“I’m just so happy to win a race here this early in the season, you know I don’t think we won until like July last year,” Haudenschild noted. “That’s a big goal of mine, winning early and building some momentum. It’s always cool to get a win at a track that the Outlaws haven’t been to before too. Ripper, Nikolas, Drew, they’ve got this NOS Energy Drink #17 dialed in right now. I’m glad the fans made it out. This is a beautiful race track and I think it put on a really great show.”

Rolling from the outside pole of the 30-lapper, Haudenschild’s biggest challenge was alongside him in the form of Schuchart, who had yet to blunder all night long at the 1/3rd-mile. Entering Friday’s feature, the Shark Racing #1S had a perfect night going with Slick Woody’s Quick Time, Team Drydene Heat win, and DIRVision Fast Pass Dash win all secured.

Schuchart was as dominant as anyone in clean air, but lap traffic proved to be his Achilles heel on this night. He caught fortunate breaks with three stoppages: lap 5 crash for Brock Zearfoss, Scotty Thiel & Sam Hafertepe, lap 9 caution for points leader Carson Macedo, and lap 14 flip for fourth-running Aaron Reutzel. However, the final restart, and more importantly, final run through traffic played the most pivotal role.

Restarting with 16 to go, Schuchart drove away to a near two-second advantage over Haudenschild before traffic slowed him with ten laps remaining. That’s when the fun began.

At one point, a heart-stopping four-car battle for the lead ensued with Schuchart and Haudenschild along with an emerging Donny Schatz and Brad Sweet all under a blanket for the race lead. One failed slide job attempt on a lapper set Haudenschild up for a successful run on lap 25 to clear for the lead. Schuchart came swinging back with his own slider, but Haudenschild pinned the throttle and threaded the needle around the outside to make it stick.

The duo continued to wage war in the waning laps with Haudenschild only covering Schuchart by 0.054-seconds with three to go. It was still anyone’s race until the checkered flag dropped with a mere 0.286-second margin of victory, a finish which sent the Magnolia Motor Speedway crowd into the air.

“We got to the lappers like twice and the caution would come out every time,” Haudenschild, of Wooster, OH, remembered. “I was just chilling, keeping calm in second, trying not to get passed and see where my car was at. He was really good in open track, I didn’t have much for him. We hit traffic though and the rubber kind of came in while we were in the middle of that. It got really tricky. He tried those sliders on a few lappers and I was getting runs off that. If I wouldn’t have got under him off turn four, I don’t think he would’ve messed up again.”

After leading the opening 24 laps, Schuchart of Hanover, PA settled for runner-up honors at Magnolia. The sitting duck effect of leading through traffic bit him the most in Friday’s 30-lapper. It wasn’t the second win of the season he wanted, but Schuchart’s run returned him to the top of the early-season championship standings. He’s the only driver with a top ten finish all five races this season.

“Freakin’ guy beat me in golf this week, and now on the race track,” Schuchart joked about Sheldon. “It’s just hard to tell when you’re out front leading in traffic by yourself. It’s hard to gauge how hard you need to push, especially when the track is like this, really wide and not a ton of grip. I pushed the limit too hard with Parker [Price-Miller] and let Sheldon get by me. I had that chance to get him back in turns three and four, but underestimated his entry and couldn’t make it work. Hopefully we can come back here and park it in victory lane.”

Rounding out the podium at Magnolia Motor Speedway was Brad Sweet with a 12th-to-third bid in the Kasey Kahne Racing, NAPA Auto Parts #49.

“The goal is to be up here standing on the frontstretch every night, and we’re doing that,” Sweet spoke on their consistency. “The real adversity and grind of an 80+ race Outlaw tour is sometimes you’re starting up front, but other times like tonight you’re digging yourself out of a hole. I felt like we could’ve contended for the win there, but by the time we got up here the track got top dominant I think and I used up my tires to get this far. It was fun watching Sheldon and Logan be aggressive there, and Donny and I had another fun battle too.”

Donny Schatz made it to third at one point, but slipped back to finish fourth in the closing stages aboard his Tony Stewart/Curb-Agajanian Racing #15. One of the biggest storylines outside the podium was Kasey Kahne, who earned KSE Hard Charger honors with a huge 23rd-to-fifth run aboard the Caravan Trailers #9. The top five finish is Kahne’s first in World of Outlaws competition since the 2002 King’s Royal at Eldora Speedway.

Closing out the top ten at Magnolia Motor Speedway was David Gravel in the Big Game Motorsports #2, Gio Scelzi in the KCP Racing #18, Cory Eliason in the Rudeen Racing #26, Wayne Johnson with his first top ten of the year in the #2C, and Ian Madsen in the Sam McGhee #11.

UP NEXT – The World of Outlaws NOS Energy Drink Sprint Car Series will visit another new facility today, Saturday. March 13. For the first time ever, The Greatest Show on Dirt is heading for Monroe, Louisiana for a stop at The Rev.