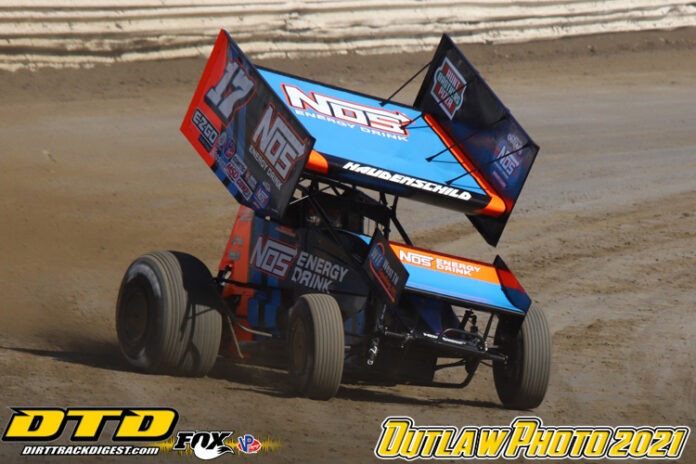 PEVELY, MO – The Greatest Show on Dirt is bound for I-55 this weekend.

Hosting a doubleheader this Friday and Saturday, April 2-3, the Federated Auto Parts Raceway at I-55 will host the World of Outlaws NOS Energy Drink Sprint Cars for the 60th time – becoming the tenth-most visited track in Series history.

Let’s get you ready for an always-exciting affair with the Outlaws rolling into Pevely, MO this weekend. Here are some of the storylines to follow:

RECORD STREAKS: For three of the top drivers, they’re approaching or already have established record personal runs to start the 2021 World of Outlaws campaign; and they’re all previous winners at I-55.

Brad Sweet of Grass Valley, CA currently leads the championship standings aboard his Kasey Kahne Racing, NAPA Auto Parts #49. That’s thanks to a stretch of back-to-back wins and six-straight podium finishes, which is second-only to his personal record seven-consecutive podiums in 2020. He’s won at I-55 in 2019 & 2020.
Sheldon Haudenschild of Wooster, OH has officially completed the greatest five-race stretch of his young career. A pair of victories at Magnolia (MS) and Cotton Bowl (TX) lead the way over a span that has featured a 2.8 average finish for the Stenhouse Jr. Marshall Racing, NOS Energy Drink #17. He also won at I-55 in 2019 & 2020.
Logan Schuchart of Hanover, PA has matched 2020 as his best start to a season. Through nine races, he and his Shark Racing, Drydene Performance Products #1S are still the only combination with a top ten finish in every World of Outlaws race. He won at I-55 in 2018.
THE WAITING GAME: It’s been 16 races since Donny Schatz won his 299th career World of Outlaws feature at Williams Grove (PA) Speedway on October 3, 2020. This is Schatz’s fifth-longest winless drought over the 15-year span that dates back to the first of his ten Series championships in 2006.


This 2021 season will mark only the fifth occurrence since the turn of the millennium that Schatz enters the month of April without a World of Outlaws win. For 16 of those seasons, he was a winner within the first seven races. Over this stretch, his longest starts to a season without winning are 16 races in 2011, 23 races in 2001, 27 races in 2004, and 49 races in 2002.

The good news? The Outlaws head to I-55 this weekend where Schatz has always been stout. In 49 appearances, the Fargo, ND native has victories in 2006 and 2015 as well as 28 top-five finishes and 41 top-ten runs.

It was May 22, 2020, only the second race amid the #RETURNtoRACING due to the COVID-19 pandemic. Larson, making his first-ever appearance at the Pevely, MO 1/3-mile, was the sixth car to qualify in his Paul Silva owned #57. Lap one was a 10.145 already good enough for QuickTime, but that wasn’t enough. Lap two was a perfect run of 9.995-seconds, marking the first nine-second lap in I-55 track history. Will see another nine-second lap this weekend?

RICO RETURNS: The ever-popular Rico Abreu of St. Helena, CA will make his season debut with the World of Outlaws this weekend at I-55. After an early-season west coast swing in the Works Limited #57 with Paul Silva on the wrenches, the 29-year-old will return to his personally-owned #24 Abreu Vineyards machine this weekend as he ventures to the Midwest.

An eight-time winner in World of Outlaws action, I-55 is not only one of his Abreu’s best tracks, it’s one of his favorites too. He has four total wins at Pevely, including two Ironman 55 titles in 2016 and 2018 to go along with a weekend sweep with the POWRi National Midgets in 2019.

This weekend will mark Rico’s first event competing against Jason Sides’ #7S, who he became part-owner of this off-season.

BUILDING MOMENTUM: A quintet of racers racked up top ten runs at Lake Ozark Speedway on Saturday night and continued building momentum ahead of an I-55 doubleheader.

Kraig Kinser of Bloomington, IN scored his third top ten through the first nine races, the most since for his Kinser Racing, Mesilla Valley Transportation #11K since 2014. He enters I-55 as a former winner in 2005.
James McFadden of Alice Springs, NT, AUS made it three top tens in three races since he joined the World of Outlaws tour from overseas. On Saturday, he landed his first podium of 2021 aboard the Kasey Kahne Racing, Karavan Trailers #9. He enters I-55 still searching for his first win at the track.
Carson Macedo of Lemoore, CA was aiming for a meaningful win in the Jason Johnson Classic aboard the Jason Johnson Racing #41, but a fifth-place finish would have to suffice. After back-to-back 11th & 13th-place finishes, a top five was a welcome sight. He enters I-55 with three top-tens in seven starts.
Aaron Reutzel of Clute, TX continued his steady top-ten stretch at Lake Ozark. Outside of a win at East Bay (FL) Raceway Park, the Roth Motorsports #83 only has one other top-five finish. However, they do have eight top-ten finishes through the first nine races and lead the Kevin Gobrecht Rookie of the Year chase. He enters I-55 with just four starts under his belt.
David Gravel of Watertown, CT advanced to third in the championship standings following a seventh-place run at Lake Ozark. His Big Game Motorsports #2 has collected one win to go along with eight top-ten finishes and five top-five results this year. He enters I-55 as a winner back in 2016.