KNOXVILLE, IA – When the Sprint Car Capital of the World calls, you always answer.

Next month, on Friday & Saturday, June 11-12, the World of Outlaws NOS Energy Drink Sprint Cars will answer that call with their first visit of the 2021 season to the famed Knoxville Raceway in Knoxville, IA.

The fifth annual Brownells Big Guns Bash brings The Greatest Show on Dirt to the 1/2-mile oval for back-to-back summer nights to take on the stout weekly crowd of racers. For the Outlaws, it’ll be their only chance to get laps before returning on August 11-14 for the 60th running of the NOS Energy Drink Knoxville Nationals pres. by Casey’s General Stores.

Created in 2017, the Brownells Big Guns Bash flipped the script from a single-night showdown to a two-day affair at Knoxville. Over those eight events since then, five different winners have found victory lane and carried that momentum to success when the $150,000 paydays arises at the Nationals in August.

Of all active drivers, it’s the last three Knoxville Nationals champions that stick out the most even in June at the 1/2-mile.

All told, Schatz, Sweet & Gravel each have five podium finishes over the last eight events.

“It’s hard to even put a track like Knoxville into words,” Sweet said on how special the track is to him. “It’s the Mecca of our sport, the Knoxville Nationals is our most iconic race of every season. Going there in June has become a big deal for translating results to August. In order to perform well when the money is on the line, you really have to dial yourself in during those two nights in June. It’s a really important weekend to build momentum ahead of all the big races in summer.”

Knoxville’s group of weekly racers will get their biggest test of the season when the Outlaws come to town. Through three events thus far, Davey Heskin of St. Michael, MN, Lynton Jeffrey of Sydney, NSW, AUS, Terry McCarl of Altoona, IA, and Sawyer Phillips of Pleasantville, IA are the only drivers with a top-10 finish in each outing.

Victories this season have gone to Jeffrey, Austin McCarl, and Sheldon Haudenschild, who made a last-minute decision in April to haul from Tulsa, OK to Knoxville, IA when the Outlaws rained out at Lawton and Devil’s Bowl. Haudenschild’s win came with an incredible last-lap pass over Giovanni Scelzi to score his first-career victory at Knoxville.

It was an accomplishment that gives the Stenhouse Jr. Marshall Racing, NOS Energy Drink #17 tons of momentum heading into the Brownells Big Guns Bash next month.

“It’s pretty crazy all within the last month I’ve won at Knoxville and now Eldora for the first time,” Haudenschild noted on his progression. “This team we’ve got is really special. We’ve been improving time and time again at Knoxville, last time we finally put all the pieces together. Just having the experience of winning there makes me feel a lot more comfortable and excited to go back in June, and then of course for the Nationals.”

Macedo, currently third in the points aboard the Jason Johnson Racing #41, is a former ASCS winner at the track and finished top-five in both June races last year. Schuchart, who’s been on a strong rebound in the Shark Racing #1S, has collected seven podium finishes in his last nine starts at Knoxville. Kinser is the 2005 Knoxville Nationals champion and McFadden is a multi-time 360 winner at the track.

With one month and seven events still ahead before the Outlaws reach Knoxville, Brad Sweet continues to lead the standings in pursuit of his third consecutive Series championship aboard the Kasey Kahne Racing, NAPA Auto Parts #49.

David Gravel, driver of the Big Game Motorsports #2, has risen into contention as Sweet’s closest challenger thanks to three wins – including a Bristol sweep – and 19 top-10 finishes through the first 20 events. He’s only 60 points back entering the first PA Posse swing of the season. 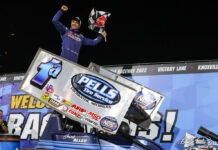