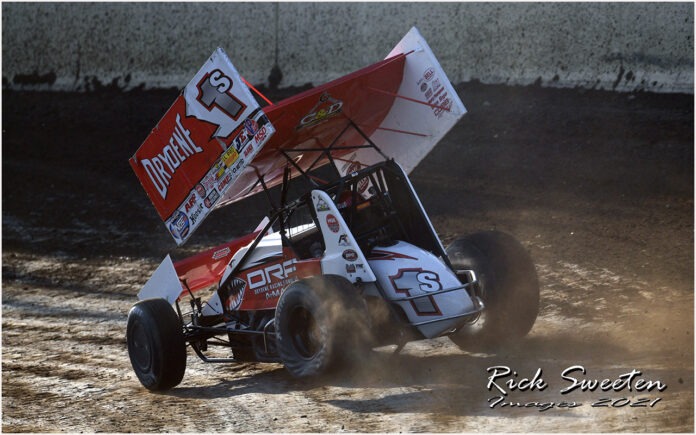 SWEDESBORO, NJ – A standing-room-only crowd on Tuesday night served witness to an attack by Shark Racing at Bridgeport Motorsports Park.

Logan Schuchart, piloting his Drydene Performance Products #1S, soared by Carson Macedo on Lap 11 and ran away with his second World of Outlaws NOS Energy Drink Sprint Car Series triumph of the 2021 season, and the 25th of his career.

It was a much-needed breakthrough for the Hanover, PA native, who snapped a 21-race losing streak with his mid-week win. It was a victory lane trip months in the making, and one that quite possibly restored the confidence and momentum they’ve been searching for since February.

Schuchart’s score, which brings him only five away from tying his grandfather Bobby Allen at 30 World of Outlaws wins, came with the defeat of Macedo, who had a perfect night going. The Jason Johnson Racing #41 established a New Track Record in Slick Woody’s Qualifying, won his Team Drydene Heat Race, won the DIRTVision Fast Pass Dash, and led 11 laps before fading to Schuchart’s Triple-X powered by Newman’s Racing Engines.

“Confidence is everything,” Schuchart said with a pep in his step. “You know we started off the season so strong, but the small issues started coming and it seemed like one thing after another hit us. Sometimes parts fail, there’s just nothing you can do about it. We need that confidence back, and I think we’ve got it.”

Marking the first appearance by The Greatest Show on Dirt at the newly-reconfigured 4/10-mile, Tuesday’s trip to Bridgeport started off hot with Macedo’s time of 13.215 seconds establishing a New Track Record. Three thrilling Team Drydene Heat Races followed and the stage was set for an intense 30-lap NOS Energy Drink Feature.

It was Outlaws vs. Posse on the front row as Macedo dealt with Anthony Macri of Dillsburg, PA to his outside. Macri offered a Lap one slider with hopes of stealing the top spot, but Macedo’s outside momentum was too much to bare. Schuchart, who started fourth, made his move to second on Lap two as he went by Macri and started to reel in Macedo.

With the aid of lap traffic, Schuchart scooted closer and eventually stole command of the lead from Macedo on Lap 12. Macedo was mired on the outside as Schuchart stuck the very bottom of the 4/10-mile and rolled his #1S right on by.

Near the halfway point, Donny Schatz entered the picture and made it a three-way war for the top spot as he dueled with Macedo and Schuchart. A trio of stoppages for Aaron Reutzel, Brock Zearfoss & Ryan Smith slowed the pace, but the action returned with the final restart on Lap 16.

The battle for P1 got real interesting on Lap 22 when Macedo attempted a slide job on Schuchart, but he came up just short and lost his only chance to sneak up on the #1S. From there, Schuchart ran off to take the checkered flag by 1.731-seconds over Macedo.

“My grandfather never quits, and he’s our motivation,” Schuchart said on never giving up. “We’ve got a Triple-X with 50 races on it, this wing has been patched up a hundred times, you know. We put this old car together and I’d say she’s doing something right. So happy to get it back in victory lane where it belongs.”

Macedo’s perfect night fell to the wayside by one position, but he did gain crucial points on Brad Sweet and David Gravel in the championship chase as summer approaches.

“I feel bad for my guys,” Macedo candidly mentioned. “I think we had the car to win, but just lost it in traffic. I was making speed through the middle, but I didn’t know where to be in traffic. I went to the top and Logan drove right by me on the bottom. I just couldn’t get it going from there.”

Finishing third and rallying after falling to fifth was Anthony Macri, giving the PA Posse one representative on the podium.

“We’ve been running consistent,” Macri said after his second podium in four races. “I felt like we had a good shot from the front row, but we just didn’t have the car to win the race. It’s a confidence booster, though. Whenever we can run well against these guys you’re doing something right.”

Rounding out the top five on Tuesday night was Donny Schatz in fourth-place aboard the Tony Stewart/Curb-Agajanian Racing, Carquest #15, and Sheldon Haudenschild in fifth-place aboard the Stenhouse Jr. Marshall Racing, NOS Energy Drink #17.

Closing out the top ten at Bridgeport was a group of Pennsylvanian’s and Californian’s. It was Brent Marks in sixth, Brad Sweet in seventh, Danny Dietrich in eighth, Giovanni Scelzi in ninth, and Buddy Kofoid in tenth.

UP NEXT: The World of Outlaws NOS Energy Drink Sprint Car Series will take two days off before returning to the state of Ohio for a weekend doubleheader. On Friday, May 21, we’re off to Attica Raceway Park followed by a visit to Sharon Speedway on Saturday, May 22.