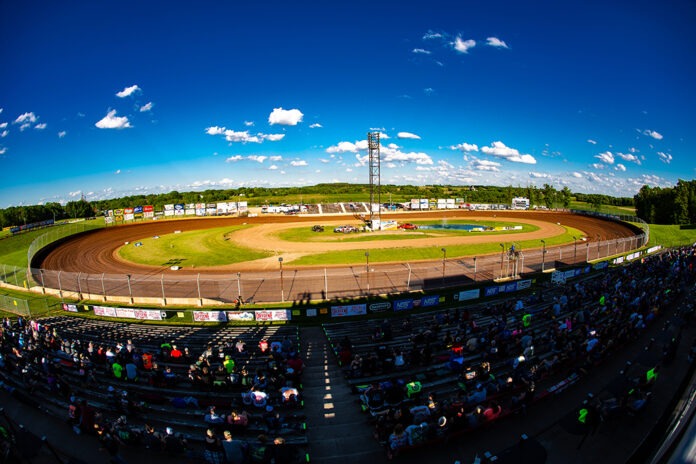 WEST BURLINGTON, IA – The summer months are the most grueling when it comes to the World of Outlaws NOS Energy Drink Sprint Car Series.

Look no further than the first official week of summer for proof of that. In a span of ten days next month, The Greatest Show on Dirt will race eight nights at five tracks in four states. It’s crucial for not only the championship chase, but also for perfecting your setup and building momentum into the laundry list of Crown Jewel events.

That demanding slate all begins with a triple-header through Iowa and Wisconsin on June 17-19.

On Thursday, June 17, the Outlaws return to 34 Raceway in West Burlington, IA for the sixth time in Series history. In five events dating back to 2008, five different winners have found victory lane at the 1/3-mile. Among those winners are Tony Bruce Jr., Joey Saldana, Craig Dollanksy, Donny Schatz, and Parker Price-Miller. Wayne Johnson is also a former winner at the track with a 2015 NSL triumph to his credit.

On Friday, June 18, a new track graces the schedule with the Dubuque Fairgrounds Speedway in Dubuque, IA welcoming the World of Outlaws for the first time ever. The 3/8-mile bullring has never hosted The Greatest Show on Dirt, but several different sanctioning bodies have contested events at the Iowa facility before. Dubuque is another track where Oklahoma City’s Wayne Johnson has won before, scoring a Sprint Invaders win in 2019.

“I love getting out to new tracks,” said David Gravel, who is second in the championship standings. “We go to some places like Knoxville, Eldora or Williams Grove where everyone has all these massive notebooks and we all have agendas on what to expect and then how to react. But, when we go to these new places, you have to throw everything out the window. Obviously you can compare it to other tracks, but it’s all an even playing field when the night begins. You really see which driver and crews can adapt the best.”

On Saturday, June 19, Beaver Dam Raceway in Beaver Dam, WI hosts the World of Outlaws Sprint Cars for the 29th time. The 3/8th-mile oval debuted on the schedule in 1996 and has been a winning track for legends like Kinser, Haudenschild, Blaney, Schatz, and others over the years.

When it comes to Beaver Dam, Brad Sweet has been the man to beat lately, and quite frankly, he’s been unbeatable. The two-time and defending Series champion has won three consecutive World of Outlaws events at Beaver Dam, and four total in his career. With one month remaining until start of summer, Sweet and his Kasey Kahne Racing #49 lead the standings by 68 points.

“Anytime you can go to a place where you’ve won multiple times, you get the little boost of confidence,” Sweet noted. “Especially with our crew right, I’ve got great chemistry with Eric, Joe, and Andrew, we all know what to expect out of each other. We’ve really hit on something at Beaver Dam. It’s a fun little race track, and hopefully we can keep that streak alive.”

The real grind begins following that triple-header as the “Summer of Money” gets underway with THE SHOWDOWN.

Teams will get a one-day break following Beaver Dam, using Sunday as a travel and maintenance day. On Monday & Tuesday, June 21-22, the Huset’s 50 offers two nights of racing and a finale paying $30,000-to-win. Another one day away from the track ensues before three more nights at the Jackson Nationals on June 24-26 brings around a $50,000-to-win prize. If any driver can sweep both finales, they’ll take home an extra $100,000.

Through 24 of a scheduled 83 events, Sweet is leading the standings in pursuit of his third-consecutive World of Outlaws NOS Energy Drink Sprint Car Series championship.

However, on his heels are six hungry drivers, all within 200 points of the coveted top spot.