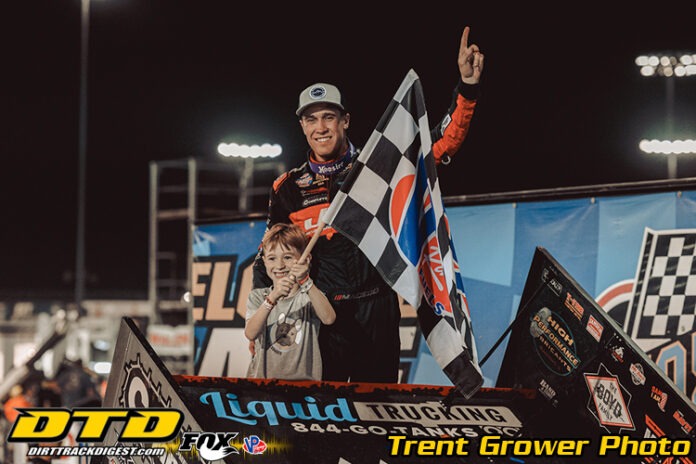 KNOXVILLE, IA – From Jason Johnson to David Gravel, there’s always been something special about the JJR #41 at Knoxville Raceway.

On Friday night, Carson Macedo became the newest to trust Philip Dietz on the wrenches and soar to glory on the black zook clay in World of Outlaws NOS Energy Drink Sprint Car Series competition. The Lemoore, CA native aced the final restart of the race and roared by Kerry Madsen’s #14 to take the lead with three laps left.

The win not only marked the 10th of Macedo’s World of Outlaws career, but it was his first-ever 410 Sprint Car triumph at The Sprint Car Capital of the World.

Better yet, it only proves just how lethal Macedo, Dietz, and the rest of the JJR boys are when it comes the Iowa 1/2-mile. In six total appearances at Knoxville in the #41, Macedo has never finished outside of the top-10 and four times he’s put it on the podium.

His late-race steal gave him the $10,000 check from the Brownells Big Guns Bash, and it allowed him to gain more crucial points on Brad Sweet and David Gravel in the championship chase.

“I’m a little out of breath from yelling, I’m so damn happy,” an ecstatic Macedo mentioned. “You know I sat in Jason’s [Johnson] parents motorhome earlier and watched video after video of this place with Craig and Debra. I feel like there’s a common theme on winning at this place and I thought if I don’t do it right, at least I’ll get better at it. Winning at Knoxville in the #41 is pretty special.”

More than anything else, Macedo is oozing with swagger. He’s ready for August, and the potential to become Jason Johnson Racing’s third different driver to win the Knoxville Nationals.

“My confidence is extremely high right now,” Macedo offered. “Leading into tomorrow, leading into the Nationals, I 100% believe we’re going to be a threat.”

Before Macedo parked the JJR #41 in victory lane, another pair of superstar teams stole attention to begin the night.

Kasey Kahne made his return to the seat for the first time since March, and quickly drove a third KKR #9T around Knoxville in 15.176 seconds in an effort worthy of the Slick Woodys Cornhole Company QuickTime Award.

The attention then shifted to Tony Stewart/Curb-Agajanian Racing, who completed a front row lockout by placing Kerry Madsne’s #14 on the pole and Donny Schatz’s #15 to his outside in the 25-lap NOS Energy Drink Feature.

Madsen jetted to the initial lead and Schatz slipped to third as Macedo rose to the occasion down the backstretch on the opening circuit. The duo offered a high-speed chess match through lap traffic, but it never got really close (outside of a Lap 11 bobble) until the only caution of the race flew on Lap 20 of 25.

Creating a single-file restart, Madsen brought the field back to green with five laps remaining and Macedo hot on his heels.

“Kerry was maneuvering in and out of lap traffic so well,” Macedo applauded. “There were a couple of times I thought I would have runs on him, but the lappers zigged and zagged the wrong ways. I saw the caution and thought I would be tough to get such a good start, but somehow we made it happen.”

Make it happen, indeed. As Madsen stuck the bottom, Macedo carried his speed through the corners and built a run off turn four and down there front stretch. He peaked under Madsen’s #14 and drove it hard into turn one to secure the lead and officially lead the 22nd Lap.

From there, he pulled away and saw the checkered flag to earn his fourth win of the 2021 World of Outlaws campaign.

“This is one of the toughest tracks in the country,” Macedo praised Knoxville. “It’s so technical, but I’m lucky to have this crew behind me. My car was so good that when even I as the driver made mistakes, it felt like the car could make the recovery for me.”

Falling short of Macedo’s #41 by 0.748-seconds at the checkered flag, Logan Schuchart crossed the stripe in second-place. A momentum building run for his Shark Racing, Drydene Performance Products #1S, which has time and time again proven lethal at Knoxville’s 1/2-mile.

“It’s always fun racing at this place against the best in the business,” Schuchart mentioned. You’re doing something right when you’re passing Knoxville Nationals champions like Donny [Schatz] and Brad [Sweet]. I could tell he didn’t feel comfortable on the bottom in turns three and four, and that’s where I felt like I was making tons of ground, but we just ran out of time.”

After leading the opening 21 laps from pole position, Kerry Madsen ended up with a third-place finish aboard the Tony Stewart/Curb-Agajanian Racing, Advanced Auto Parts, Rush Truck Centers #14. It’s the first podium effort of 2021 for the St. Mary’s, NSW, AUS driver.

“We were looking good for a bit man,” Madsen said. “What a team to be involved. I was feeling comfortable all race long, but I just didn’t make the right adjustments under caution. I let the boys down. Hopefully we come back better tomorrow.”

Rounding out the top-five on night one of the Brownells Big Guns Bash was outside pole sitter Donny Schatz in fourth aboard the Tony Stewart/Curb-Agajanian Racing #15 and then Giovanni Scelzi in the fifth spot in his KCP Racing #18.

UP NEXT: The World of Outlaws NOS Energy Drink Sprint Car Series will be back at Iowa’s Knoxville Raceway tomorrow, Saturday, June 12 to conclude the Brownells Big Guns Bash.