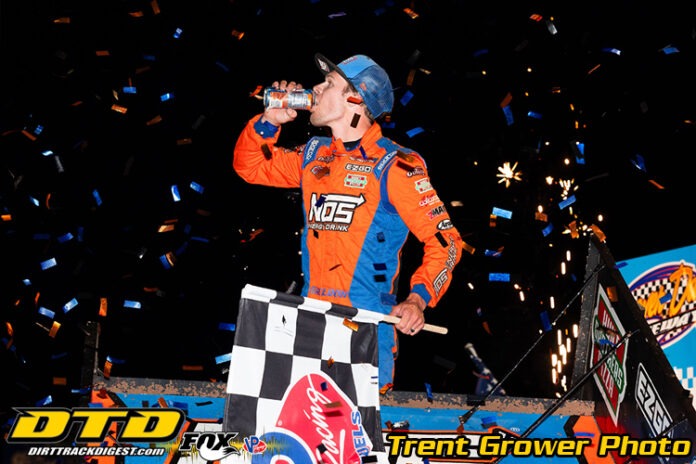 The always-exciting pilot of the NOS Energy Drink, Stenhouse Jr. Marshall Racing #17 brought fans to the edge of their seats with a thrilling, non-stop 40-lap run through lap traffic on the Wisconsin 1/3-mile oval.

Overtaking pole sitter Giovanni Scelzi on the 20th lap, Haudenschild sliced and diced his way through the back markers and ran off to a 2.109-second victory when it was all said and done.

It was his fourth victory of the 2021 season and the 18th of his World of Outlaws NOS Energy Drink Sprint Car Series career, tying him with fellow Ohioan Brad Doty for 30th on the All-Time Wins List.

“That was so much fun,” an elated Haudenschild said with a smile.”A green-to-checkered run is just what we needed. I think a restart would’ve changed the whole course of this one. Getting through lap traffic is the most fun aspect of Sprint Car racing. We had a great track tonight and I could really make some moves.”

Saturday’s score at Beaver Dam was the perfect conclusion to a weekend that had otherwise been trying for the #17 crew. They had podium positions locked up at both 34 Raceway and Dubuque Fairgrounds Speedway, but late-race trouble took them away from the front stretch and stole points from them on each occasion.

However, there was no stopping Lil Haud on this night. The Wooster, OH native was bound and determined to take NOS Energy Drink back to victory lane with The Greatest Show on Dirt. After all, his most recent win with the Series was May 1 at Eldora Speedway, which was 12 races ago.

With his win, the Haudenschild’s officially tied the Smith’s as the third winningest father-son duo in World of Outlaws history at 90 combined wins. Sheldon’s 18th plus his father Jac’s 72 triumphs equals Steve Smith’s six scores along with son Stevie Smith’s 84 career victories.

The selling point for Haudenschild’s trip to victory lane at the 11th annual Jim “JB” Boyd Memorial was lap traffic.

He zoomed by Giovanni Scelzi on the 20th circuit and ensued to lap all the way up to 11th place. The Wooster, OH native felt fast from the drop of the green flag, but timing was everything.

“It pays off running second, third, fourth and watching what those guys are doing,” Haudenschild enlightened the crowd. “I was staying patient behind Gio and Carson [Macedo] just waiting for the right time. I felt like we were quicker, but I just had to wait on traffic to make my move.”

After winning the DIRTvision Fast Pass Dash and leading the opening 19 laps, Giovanni Scelzi of Fresno, CA matched his season-best effort of second-place in his KCP Racing #18.

“The better driver won this race for sure,” Scelzi admitted. “Sheldon just runs so hard the entire time. I tried to run it as hard as I could, but the lappers were everywhere and I got too top dependent. Those laps clicked by so quick, I didn’t realize how far along we actually were. All in all, not too bad for my first ever race here.”

Taking the final podium position in third-place was David Gravel in the Big Game Motorsports #2, who now prepares for a huge week of racing at THE SHOWDOWN.

“I wish this deal was 50-60 laps honestly,” Gravel joked. “We’ll take a podium and hopefully start racking up some wins this week. We’re hitting on something consistently, we just need to fine-tune it. We’ve got a big week coming up at Huset’s and Jackson. Hopefully you fans can come out and support it or watch on DIRTVision.”

Closing out the top-five on Saturday night was championship contenders Brad Sweet in fourth aboard the Kasey Kahne Racing #49 and Carson Macedo in fifth driving the Jason Johnson Racing #41.

Rounding out the top-10 at Beaver Dam was James McFadden in the Kasey Kahne Racing #9, Aaron Reutzel in the Roth Motorsports #83, Donny Schatz in the Tony Stewart/Curb-Agajanian Racing #15, Logan Schuchart in the Shark Racing #1S, and Brock Zearfoss in the Zearfoss Racing #3Z.

UP NEXT: The World of Outlaws NOS Energy Drink Sprint Car Series will kick off the “Summer of Money” this week. One quick day of rest before THE SHOWDOWN offers up the largest payday in 2021 to date. A five-race, six-night schedule takes the Outlaws to Huset’s Speedway on Monday and Tuesday followed by Jackson Motorplex from Thursday-Saturday.