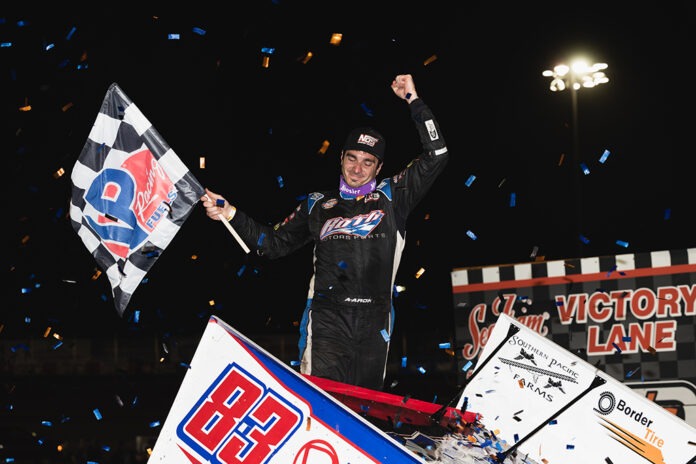 BRANDON, SD – When the money is on the line, Aaron Reutzel shows up.

He was on the podium when Bristol Motor Speedway paid $25,000-to-win, he stood in victory lane with $15,000 in his pocket at Williams Grove Speedway, and on Tuesday night he earned the highest payday of the season thus far with a $30,000 check at the inaugural Huset’s 50.

The Roth Motorsports gasser was relentless in his pursuit of a fifth career World of Outlaws NOS Energy Drink Sprint Car Series victory. He timed in second-quick, won his Drydene Heat Race, dominated the DIRTVision Fast Pass Dash, and led all 50 laps of the NOS Energy Drink Feature at South Dakota’s Huset’s Speedway.

More importantly, the Clute, TX native will head to this weekend’s 43rd annual AGCO Jackson Nationals with the chance for a record-setting payday.

If he wins Saturday’s finale worth $50,000 at Jackson Motorplex, he’ll receive an additional $100,000 bonus thanks to Tod Quiring’s THE SHOWDOWN.

“I’m so pumped,” Reutzel remarked after his wing dance. “It’s been a trying year for us. We’d find speed, then we’d lose it, then we’d find something again, then it’d quit working. We haven’t given up, though. I felt like we were pretty good, I mean we didn’t make any real changes all night and that normally makes me nervous because I like to change a lot. A few tiny adjustments during that #OpenRed, but nothing major.”

Losing the initial start of the 50-lapper to outside pole sitter Donny Schatz, Reutzel was actually saved by the bell when contact involving himself brought out the caution and forced a complete restart. Battling for second into turn one, Reutzel’s #83 and Carson Macedo’s #41 collided and sent the Jason Johnson Racing machine for a wild flip into the fence.

A complete restart allowed Reutzel to drive by Schatz and secure command of the top spot on Lap 1, and from there he never looked back. A Lap 5 red flag for Jacob Allen and Lynton Jeffreys slowed his pace, but wasn’t enough to give Schatz a run at the Roth ride.

At the Lap 30 #OpenRed, Crew Chief Dylan Buswell made all the right calls and sent Reutzel back out with more confidence in his Speedway powered Triple-X.

“I was really looking forward to it,” Reutzel noted on the stoppage. “I got a bad vibration running the cushion early on. If it was a full 50-lapper, I think it would’ve been tough to hang on.”

Reutzel ran off into lap traffic unchallenged until Schatz was able to close on Lap 41 and almost pulled alongside. Seeing the #15’s nose was just what the Texan needed to get up in the seat, as he found another gear and ran off to win it by 1.160-seconds.

“It’s a good time to find some speed,” Reutzel said on the “Summer of Money.” There’s a lot of money on the line. When you do this for a living, this is the time to be fast. We’re gonna worry about celebrating tonight, but tomorrow we’ll start thinking about that $100,000 bonus.”

“He was just really good in clean air,” Sweet said on Reutzel. “The track got top dominant there, but honestly in traffic I think we were better than those guys. It just played out in his hands where we ran out of traffic. I don’t think I could’ve done anything different. We’ll take it and move on to Jackson with the $50,000 on the line.”

“We gotta work on this deal a little bit, but we’re still closer than where we were,” Schatz acknowledged. We’ll accept third tonight and move on to Jackson.”

Closing out the top-five on Tuesday night was Sheldon Haudenschild aboard the NOS Energy Drink #17 in fourth and Kyle Larson in fifth for the second-straight night in Paul Silva’s #57 machine.

Rounding out the top-10 in the Huset’s 50 finale was the Kasey Kahne Racing #9 of James McFadden in sixth, the Shark Racing #1S of Logan Schuchart in seventh, the Tony Stewart/Curb-Agajanian Racing #14 of Kerry Madsen in eighth, the Big Game Motorsports #2  of David Gravel in ninth, and the KCP Racing #18 of Giovanni Scelzi with a 17th-to-1oth run worthy of KSE Racing Hard Charger.

UP NEXT: The World of Outlaws NOS Energy Drink Sprint Car Series travels to Minnesota for the 43rd annual AGCO Jackson Nationals this Thursday-Saturday, June 24-26. A special format and the biggest payday of the season ($50,000) awaits The Greatest Show on Dirt at the first crown jewel event of 2021.