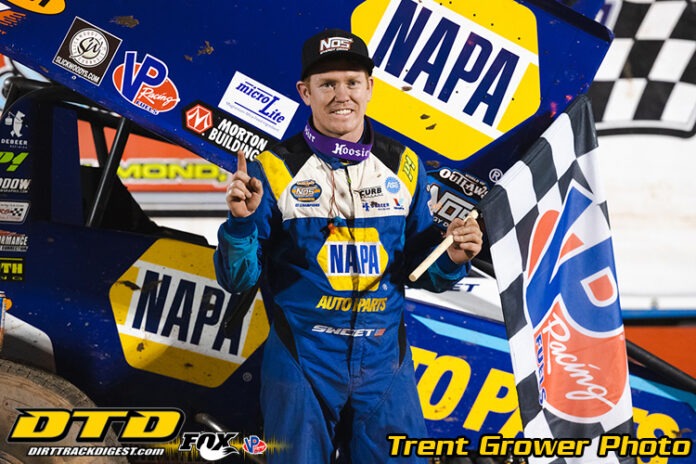 In contrasting fashion to Friday’s late-race stunner, this time The Big Cat had to survive several back-and-forth battles with Carson Macedo to come out on top of the $10,000-to-win NOS Energy Drink Feature.

The Kasey Kahne Racing, NAPA Auto Parts #49 was dominant from the start of Saturday’s show, setting Slick Woody’s QuickTime and winning his Drydene Heat Race before topping his 12th Feature of the season.

He’s now at 70 career World of Outlaws victories, only 14 away from reaching the top-1o on the all-time wins list.

“I wish the Kings Royal was here at Cedar Lake,” Sweet joked. “We have this track figured out and have developed such a great package with our cars. Like I said, it really fits my driving style. We really tried a lot of stuff tonight. It doesn’t show how hard we’re working behind the scenes. There some big money ahead of us, so we’ll keep plugging away.”


While Sweet started fourth, Macedo put his Jason Johnson Racing #41 on the pole for the second night in a row. The Lemoore, CA native controlled the lead while Aaron Reutzel settled into second aboard the Roth Motorsports #83.

Sweet picked his way forward to second by Lap 8 and already drove around Macedo for the lead by Lap 13. The only restart of the race allowed Macedo to storm right back by, however, re-taking the lead on Lap 14 and pacing another six laps.

Tracking him down through lap traffic, Sweet reeled Macedo back in and cleared him for good on Lap 21 of 35. Macedo continued to make it close over the final few laps, but ultimately Sweet crossed the stripe with a 0.834-second margin of victory.

“It was close tonight,” Sweet admitted. “I was kicking myself when I made a mistake on that restart and let Carson get by. I knew we could get him back if we just went to work, though. We’ve got a lot of confidence here. I thought last night I was too patient, so tonight I wanted the lead ASAP to set my own pace.”

Saturday’s victory marked Sweet’s 10th in the state of Wisconsin, officially making this the winningest state of his World of Outlaws career.

His fifth-straight win at Cedar Lake brings him to within one of Steve Kinser’s all-time record of six consecutive wins at a single-track. He’ll have a chance to break that record when the Independence Day Spectacular returns next year on July 1-2, 2022.

For the second-straight night, Carson Macedo landed on the pole and led plenty of laps, but ultimately finished runner-up to Sweet aboard the Jason Johnson Racing #41.

“He just beat me, two nights in a row,” Macedo said. “I thought I was as good as him, but I just have to step my game up. That’s all there is to it. We’re not happy with second, you know we want to be winning these races. I’m thankful for all the hard work my guys put in. Hopefully we deliver some big runs in the Month of Money.”

Making his debut at Wisconsin’s Cedar Lake Speedway, Giovanni Scelzi quickly found success at the 3/8-mile by capping his weekend with a third-place result for the KCP Racing #18.

“I’m happy with it,” Scelzi said. “I think we dropped a cylinder 10 laps in or something. I was wide open basically the last 30 laps. Car was awesome, I just wish we had something for them there at the end.”

Rounding out the top-five on Saturday night was a pair of drivers who rebounded after suffering flat tires while running top-five on Friday. Logan Schuchart finished fourth in the Drydene Performance Products #1S and David Gravel ran fifth aboard the Big Game Motorsports #2.

Closing out the top-10 at Cedar Lake was James McFadden in the Kasey Kahne Racing #9, Donny Schatz in the Tony Stewart/Curb-Agajanian Racing #15, Sheldon Haudenschild in the Stenhouse Jr. Marshall Racing #17, Spencer Bayston in the Sam McGhee Motorsports #11, and Jacob Allen in the Shark Racing #1A.

UP NEXT: The World of Outlaws NOS Energy Drink Sprint Car Series will remain in the state of Wisconsin for a one-night only show at Wilmot Raceway on Saturday, July 10. Following that, the “Month of Money” begins with the Brad Doty Classic and two Kings Royals at Eldora Speedway.