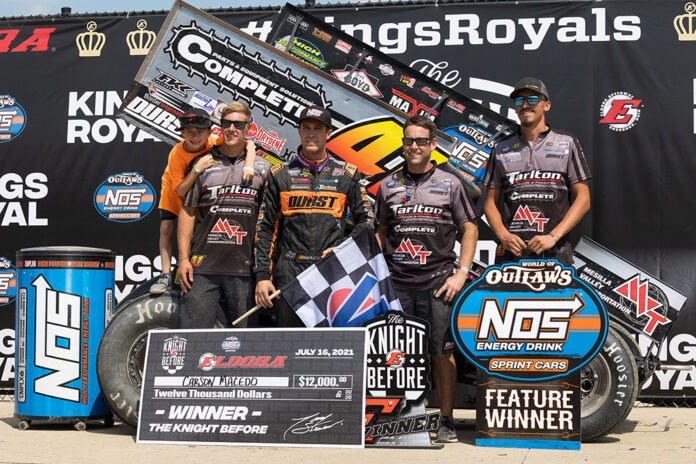 The Jason Johnson Racing #41 pilot was once again unstoppable at Eldora Speedway, leading 24 of 25 laps in Sunday’s postoponed The Knight Before The Kings Royal… which was actually held The Day After The Kings Royal.

In all, the Lemoore, CA native recorded one of the finest weeks of his career. He ran third in Tuesday’s Brad Doty Classic, won Wednesday’s Jokers Wild, made his first Kings Royal and ran sixth, then qualified for the second Kings Royal and put it on the podium, and capped it all with a victory on Sunday afternoon.

“Unfortunately, we won the two races that didn’t pay $175,000,” Macedo joked. “It was still a really consistent week, though. I felt great every time we hit the race track, and that’s a good feeling to have. Philip is really dialed in right now on the wrenches, and I’m feeling as confident as ever.”

After qualifying 18th of 30 cars, Macedo redeemed himself in Drydene Heat Race action with a fifth-to-first charge. That put him in the DIRTVision Fast Pass Dash and eventually on the outside pole of the 30-lap, $12,000-to-win NOS Energy Drink Feature.

Jumping into the lead at the green flag, Macedo ran away with a firm grasp on the race lead until Logan Schuchart entered the picture and started tracking him down. However, the first caution on Lap 12 eliminated the Shark Racing #1S from contention when a cut tire forced him and three others, including top-five running Aaron Reutzel & Sheldon Haudenschild, to the work area.

Back to green, pole sitter Brian Brown stole the spotlight momentarily as his perfect restart and well-executed slider sent the #21 to the race lead on Lap 13. Macedo got him back on Lap 14, though, and never looked back.

One final caution flew on the white flag lap, forcing a green-white-checkered and sending Macedo’s nerves through the roof. However, he survived the final two laps with ease and scored his 13th career World of Outlaws win by 1.449-seconds.

“I really did not want that last caution,” Macedo noted. “I was coming to the checkered and had it won. I lost a race to Brad [Sweet] a few weeks back because of that. Luckily, we held on, though.”

“I felt like I let my team down last night, so I’m glad we could make up for it a little bit,” Brown said. “We have a lot of speed right now, a lot of momentum, a lot of confidence, and that camaraderie around the team. I think that will help us over the next month. This car belongs up here on the podium.”

“Championship leader Brad Sweet capped a rollercoaster weekend with a season-best result of third when it comes to Eldora’s 1/2-mile. The Big Cat was in contention for both Kings Royals on Saturday, but without luck on his side.

“Were trying to be positive” Sweet spoke. “We had a good car all weekend. We led laps at one Kings Royal, very competitive at the other. Nothing played out perfect, and you need luck at some of these big other races.”

Spencer Bayston continued his stellar week with the World of Outlaws in fourth-place aboard the Sam McGhee #11. Closing out the top-five was 10x Series champion Donny Schatz in the Tony Stewart/Curb-Agajanian Racing #15.

Rounding out the top-1o on Sunday afternoon was California’s Rico Abreu in sixth, Connecticut’s David Gravel in seventh, Pennsylvania’s Brock Zearfoss in eighth, Australia’s Lachlan McHugh in ninth-from-22nd as KSE Hard Charger, and Oklahoma’s Wayne Johnson with his third top-10 of the year.

UP NEXT: The World of Outlaws NOS Energy Drink Sprint Car Series continues the “Month of Money” this week with three races against the PA Posse. The action starts at Western Pennsylvania’s Lernerville Speedway on Tuesday, July 20 for the $25,000/Win Don Martin Memorial Silver Cup, then Central Pennsylvania takes the stage with the $20,000/Win Summer Nationals at Williams Grove Speedway on Friday & Saturday, July 23-24.