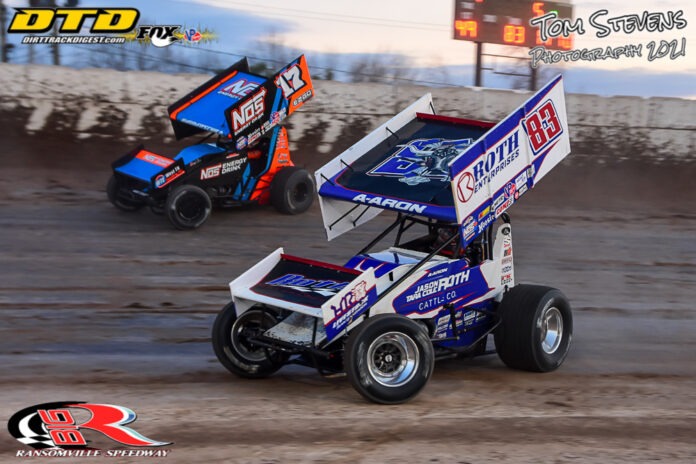 RANSOMVILLE, NY – It may have been Aaron Reutzel’s first ever trip to the Ransomville Speedway, but the driver of the No.83 Roth Motorsports machine drove the ‘Big R’ to perfection, taking the Big R Outlaw Shootout. The event was the first World Of Outlaws NOS Energy Drink Sprint Car Series race in New York in over 1,000 days, and the pits and stands at Ransomville delivered. 26 Sprints, almost all of them 410’s, and an absolutely jam-packed grandstand made for an exciting night of action in Western New York.

In the feature event, Reutzel and Brad Sweet led the field to the green flag. Reutzel quickly jumped out to a 5-car length lead over Sweet on the first circuit. Behind them, local star Paulie Colagiovanni passed second-place points runner Carson Macedo to take third. As Colagiovanni completed the pass as the field worked the second lap, the caution flew for Danny Varin in turn three. Varin attempted to turn the car around and get pushed back off, but apparent rear end damage ended what was a solid night for the No.00 team.

On the restart, Reutzel again got the jump on Sweet to hold the lead. As the top three of Reutzel, Sweet, and Colagiovanni pulled a small gap from the field, there was a battle for fourth and fifth. Macedo was shuffled out of the top five by Kraig Kinser and David Gravel by the time lap six clicked off. Kinser, the Slick Woody’s Quick Time winner, was on the move through the field after starting seventh. He passed fifth and sixth place starters Sheldon Haudenschild and Gravel before working past Macedo to take forth with Gravel in tow.

Most of the race ran under green flag conditions, bringing lapped traffic into play. Reutzel caught the first lap cars on lap eight, making quick work of the first few cars before the heavier traffic came. As the field worked the lap cars, Kinser and Gravel were side by side for fourth through the lighter traffic. They swapped sliders for many laps, with Gravel officially claiming fourth a lap later, but Kinser still remained side by side with Gravel. Behind them, Sheldon Haudenschild was mounting a comeback. After being shuffled outside of the top five, Haudenschild was able to get back around Donny Schatz, who in the midst of a few lappers had worked his way back to sixth.

As Haudenschild grabbed sixth and set his sights on Gravel and Kinser, Colagiovanni was on the charge. He drove around Sweet to grab second and started to slowly chip away at Reutzel’s large lead as the top five entered the heaviest lap traffic of the night. Kinser was able to capitalize; he took fourth back from Gravel on lap fifteen. Kinser built a gap as Gravel suddenly found himself battling with Haudenschild. Haudenschild made quick work around the top side of the speedway, claiming fifth from Gravel and passing Kinser for forth in a few short laps to put himself back into contention. The top five settled in as the race drew near its conclusion.

What appeared to be a predictable finish earlier on was quickly thrown into question, as with six laps to go Colagiovanni was on the tail tank of Reutzel. Colagiovanni peddled the top and showed a nose to Reutzel a few times on corner exit. As Colagiovanni caught Reutzel, Haudenschild hit the turn two wall. He managed to keep going, but his right rear took damage from the impact and blew apart with two laps to go, bringing out the second and final caution of the night. Haudenschild had a new right rear fitted in the hot pit and returned to finish the race.

On the restart, Colagiovanni got a few runs at Reutzel, but it was not quite enough. Despite his best efforts, Colagiovanni would come home second as Reutzel took a strong win at the Big R. The race was on for third however, with Kinser diving under Sweet to steal third at the line, with Gravel completing the top five.

Reutzel had one of his strongest nights of the season where he led all laps in the feature to take the win despite pressure from Sweet and Colagiovanni. He won his heat and finished second in the dash earlier on.

“I thought it was a great track tonight,” said Reutzel. “You could move around the track. The lanes changed quite a bit throughout the night.  We got the lead by running the top on the start and getting a good jump on Sweet. We picked the right lines early and found where we needed to be on the track at the right time.”

Reutzel was lucky in traffic as he was able to run his race with the slower cars running a different lane on the speedway.

“Fortunately, the lappers weren’t running the same line as I was,” said Reutzel. “I was able to watch them and see the speed differences, with where I’d gain on them on they’d pull away from me. It helped me change lines a few times, a few lap cars we had were actually a bit faster than me in parts of the track. We’ll see how tomorrow goes, we’ll unload with a similar setup from tonight for Weedsport and see what we need to do from there.”

Colagiovanni put on a show for the Ransomville crowd. The Empire Super Sprints regular timed well, made the dash, and passed defending champion Brad Sweet to take a second-place finish in his fourth World Of Outlaws start, and was possibly a few laps away from an Outlaw win.

“We were there,” said an elated Colagiovanni post-race. “We really didn’t expect this at all. We thought maybe a top ten was possible. I was watching the laps count down and started to think ‘Wow, we might get a really good finish here’. This JR-1 car was on rails all night long.”

Some pre-race talk helped propel Colagiovanni to the excellent finish.

“We got around lap traffic well running the top”, said Colagiovanni. “I heard Gravel and the other guys talking about avoiding dirty air from the lapped cars, so I focused on doing that. I would go in about half-a-car length behind, set the car up nicely, and work right around them.”

Colagiovanni’s car was spot on throughout the 30-lap main.

“We were hooked up all night long, the car kind of drove itself,” said Colagiovanni. “We were spinning tires off two and down the backstretch bad, but it was perfect everywhere else. A few tweaks to the car and we are going to be very competitive. We feel really good about Weedsport tomorrow, we finished second there with the 360 last time and it was right around the top.”

Colagiovanni hopes the solid outing is a sign of good things to come in the future.

“We might jump to Port Royal next year with the 410,” said Colagiovanni. “We’ll run a season there either this year or next year and see how that goes if we can. It’ll probably take some time to start consistently running well with the 410’s, but hopefully we can build the program up to go All-Star or Outlaw racing in the future.”

Kraig Kinser ran one of his strongest races of the year to take third away from Brad Sweet at the checkered flags. Kinser showed speed all night, taking the Quick Time award as well.

“We ran good last time here and have had success here in the past,,” said Kinser. “We had a great night. We got a good draw for the time trials, time trialed well with going out early, but we did struggle a little in the heat. We had a bit of work to do starting from the fourth row, but a third is great. It would’ve been nice to see what we could’ve done if we started further up, but we were going forward all night long.”

Kinser admitted he was aggressive in traffic as he tried to keep pace with the leaders.

“You can’t give up much time here in lapped traffic in a multi-car battle like we were in,” said Kinser. “You can’t always be nice. I try to be as clean as I can. Lapped traffic made for some really good racing, it makes guys have to move around and get out of the fast line to try and get around the lap car first. I think me and David Gravel passed each other at least six times or so, with Sheldon Haudenschild in that mix as well. We’re happy to be racing those guys as close as we were tonight.”

The second and final stop for the World of Outlaws NOS Energy Sprint Cars in New York is at Weedsport Speedway on Saturday, July 31st for the Empire State Outlaw Shootout at the historic 3/8ths mile.