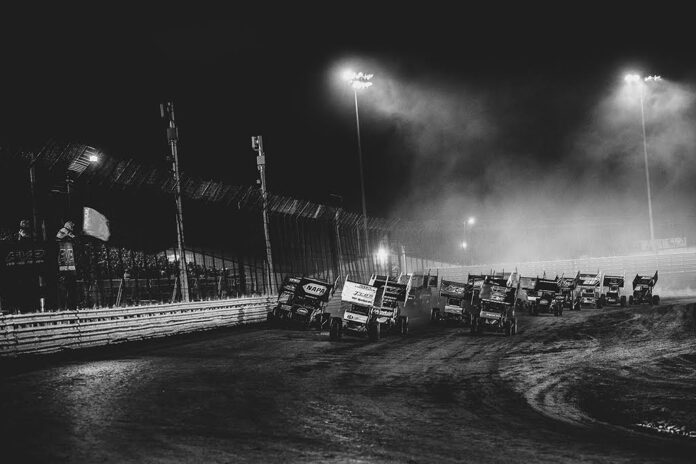 SKAGIT, WA – Not since September 2019 has the World of Outlaws NOS Energy Drink Sprint Car Series competed on the west coast.

In two weeks, that finally changes as The Greatest Show on Dirt returns to Washington and California for a thrilling three-week swing across the pacific.

Packaged inside the three-week, eight-race trip are two premier events, one brand new and one filled with history. Washington’s Skagit Speedway will debut the Sage Fruit Skagit Nationals with a $25,000/Win purse on September 2-4, while Chico, CA’s Silver Dollar Speedway resumes the iconic Gold Cup Race of Champions on September 10-11.

For the top-two in the World of Outlaws championship, it’s a chance to return home and race close to family. For the California locals, it’s their first chance in more than 700 days to pursue glory against The Greatest Show on Dirt.

The trek west officially begins this weekend and next as the Series travels through the Dakotas, but the western territory isn’t officially reached until September when the Outlaws return to Washington for the 68th time in Series history.

Skagit Speedway opens the journey west with the Sage Fruit Skagit Nationals from Friday-Sunday, September 2-4. The three-day event offers a $175,000 purse with the champion on Sunday night claiming $25,000, the second-highest payday left this year.

Four full-time Outlaws will return to Skagit as former winners including Donny Schatz (5), David Gravel (2), Sheldon Haudenschild (1), and Logan Schuchart (2), who swept the 2019 doubleheader at the 3/8-mile in his Shark Racing #1S.

“The World of Outlaws Sprint Cars are going through an exciting growth and we want to be a part of that,” said promoter Steve Beitler. “The Skagit Nationals is a new important marquee event for us and I’m proud to partner with World of Outlaws for it. We’re excited to kick off the Fall West Coast Swing for the Series with an impressive payout on the line for the drivers.”

Following Skagit, a one-night stand for 10 grand goes at Grays Harbor Raceway in Elma, WA for the Outlaws’ 30th appearance at the track. 10-time Series champion Donny Schatz will have a chance to equal Sammy Swindell as the winningest driver in Series history at the track.

With four nights in Washington done and dusted, the traveling band of Outlaws will make their long-awaited return to California. A two-week stay with four races on the calendar is opened up by the 67th running of the Gold Cup Race of Champions.

This race has been creating legends and offering the upsets of a lifetime since the 1950s. Within the last decade alone, five first-time winners have found their Outlaw moment at Chico including the likes of Kyle Larson, Sean Becker, Carson Macedo, Jonathan Allard & Kyle Hirst.

“Chico will always hold a special place in my heart,” Macedo, who is second in World of Outlaws points, mentioned. “I mean not only is it in my home state, but I got my first-ever Outlaw win there, and that really helped launch my career and eventually got me on the road full-time. It’s been a long two years away from California, I don’t think most people understand how tough it’s been not going. I can’t wait to get back home and see all of the family and friends I grew up with. Hopefully we can get a few wins, rack up some points, and make them proud.”

After Gold Cup, one weekend remains in “The Golden State” with a trip to Hanford’s Keller Auto Speedway on Friday, September 17. David Gravel enters as the defending winner of the Kings Outlaw Shootout, aiming to soar beyond Macedo and get back on Brad Sweet’s bumper for the championship chase.

On Saturday, September 18, the west coast swing is concluded with the 49er Gold Rush Classic at Placerville Speedway. This will mark the Outlaws’ 10th all-time appearance at the northern California bullring.

For two-time defending champion and current points leader, Brad Sweet, Placerville is where The Big Cat grew up. His Grass Valley home was only more than an hour away from the track, and he already banked one emotional Outlaw win on his home turg in 2018, something he hopes he can do one more time.

“I’m just glad we can finally get back to California and Washington,” Sweet said. “Obviously for me, the travel out here is much lighter being close to home, but more than that these fans haven’t seen us in two years. It wasn’t in our control, but that’s a tough pill to swallow for a region that is so dedicated to Sprint Car racing and the World of Outlaws. I hope we can give them eight great shows and come back to normal with two swings in 2022.”

Before the agenda at hand goes west, the NOS Energy Drink Sprint Cars have a triple-header through the Dakota’s to focus on this weekend. The three-night swing takes The Greatest Show on Dirt to River Cities Speedway on Friday, August 20, Red River Valley Speedway on Saturday, August 21, and Huset’s Speedway on Sunday, August 22.

If you can’t make it to the track, watch all of the action live on DIRTVision at either DIRTVision.com or through the DIRTVision App on iPhone, Android, Roku, FireTV or Xbox One.